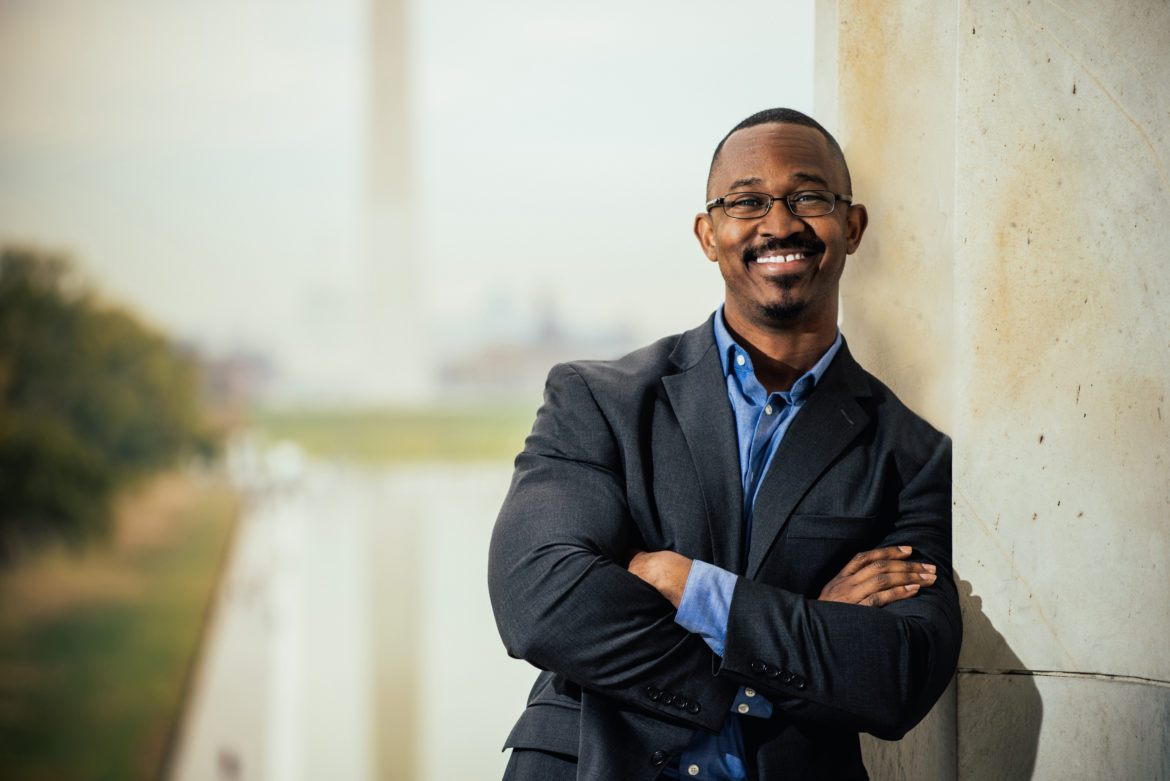 Johnson will host a new national program that will succeed the Diane Rehm Show starting Jan. 2.

Rehm, who announced Johnson’s selection on her broadcast Wednesday, has been hosting The Diane Rehm Show (originally Kaleidoscope) since 1979. Her midday program reaches 2.6 million listeners weekly and airs on 200 stations, according to producing station WAMU in Washington, D.C.

Rehm and WAMU have been preparing for the transition since December. With the selection of Johnson to helm its midday show, WAMU joins American Public Media and producers of A Prairie Home Companion in steering one of public radio’s signature programs through a generational succession of talent. In this case, however, WAMU is building a brand new show around the host.

During the search, WAMU considered more than 70 potential candidates before winnowing the field to four finalists, according to J.J. Yore, g.m. Johnson was the “least well known” among the four, he said, “but we felt he had a kind of emerging power as a host that was really worth betting on.”

Generational succession has been a major concern for public radio’s signature programs, and Yore described recent changes at A Prairie Home Companion and NPR’s newsmagazines as signs of progress. “What is most important for all of us to be doing in public radio is to be bringing aboard the next generation of talent.” he said. “And I think Joshua is that.”

1A, the new NPR-distributed program that Johnson will host, is inspired in part by the First Amendment of the U.S. Constitution and page assignment of top news stories of major daily newspapers. It will remain a two-hour weekday live broadcast originating from WAMU from 10 a.m. to noon Eastern Time. However, producers plan a more flexible format covering a broader range of topics. In addition to examining mainstay subjects such as policy and politics, they look to introduce coverage of sports, pop culture and other topics.

“We don’t have to necessarily tell the political story by relying on politicians or pundits,” said Rupert Allman, who joined WAMU this summer to lead the host transition and development of the new show. “It may well be that the most interesting viewpoints come from those from the art world, [where artists] use their own skills and expressions to say something bigger about what’s going on in the country and the world.”

With 1A, WAMU aims to reach a more diverse audience by expanding the show’s reach outside of its traditional broadcast. Producers will create more content that is “delivered and packaged in a way that is accessible for people who cannot simply be by the radio or be tuned into their phones between 10 [a.m.] and 12 Eastern,” Allman said. That accessibility could include discussions of stories of the day streamed through Facebook Live. Allman’s team is also setting up a Slack channel for listeners to interact with the show’s staff.

By using multiple platforms, producers aim to capture the best moments of the live show and offer them to those who didn’t tune into the broadcast, according to Johnson, who noted that the Diane Rehm Show airs on the East Coast while stations on the West Coast are broadcasting Morning Edition. With content available on social media and other web-based platforms, “people have something to share and it helps people become fans of the show and ambassadors for the program.”

WAMU also plans to take 1A on the road regularly, broadcasting once every few months from NPR member stations that carry the program. Allman hopes to “better express the views of America by going to those parts of America which often see media being mediated from either coast.”

“It’ll be our intention to work with our partner stations to spend time in their backyard and see things from a different angle,” he said.

Johnson, 36, said he’s “feeling a little bit of everything all at once,” about taking over for Rehm, one of public radio’s longest serving and most popular hosts. “I have wanted to do this kind of work since I was 5 or 6, so to finally have a chance to do this — and to really build something new … that stretches my skills and that does have the potential to do a lot of good — is exactly what I wanted. I feel wonderful, excited. I’m ready to go.”

While 1A will share the basic “DNA” of the Diane Rehm Show’s focus on thoughtful, civil discussions about timely issues, Johnson is glad to start fresh with a new program.

“There is no replacing Diane Rehm and I think that’s as it should be,” he said. “The fact that we’re building a new program is great for a couple of reasons. One, it allows us to craft something for new audiences, to reach out in new ways and also address the needs of America today. And also it allows Diane Rehm’s legacy to stand whole, that that show will end with her. That’s her body of work and her legacy.”

“I tend to be a maverick. I want to sound like me.” — Joshua Johnson

At San Francisco’s KQED last fall, Johnson co-created and hosted a four-episode special radio program and podcast Truth Be Told, which aimed at having civic discourse over issues of race and culture. He described his vision for the program in an interview with Current: “Whether you agree with one side or the other, you are welcome to this conversation. We would rather have you call and trust us. … We’ll be patient with you.”

While he is working with producers of 1A to nail down the exact sound of the show, Johnson wants it to share a similar ethos, especially after a presidential election that has left people “very divided and very angry,” he said.

“The election has confirmed what I already believed as a journalist, which is we should be in the business of listening,” he said. “We should be in the business of letting people speak in their own voices. … Our show has an opportunity to be deeply, deeply welcoming, a radically welcoming space for all kinds of people to stand up and be heard. That’s what the Diane Rehm Show was about, that’s what this new show will be about. In that sense, really nothing’s changed for us.”

Prior to starting Truth Be Told last year, Johnson had been morning newscaster at KQED since 2010. He also teaches a class on podcasting at the University of California-Berkeley Graduate School of Journalism. Previously, Johnson worked as an evening host and reporter at WLRN in Miami, his hometown, where he helped create an editorial partnership with The Miami Herald.

Johnson described his hosting style as pulled from “bits and pieces from a lot of people in public radio.” But, he said, “I tend to be a maverick. I want to sound like me.”

He recalled growing up listening to talk-show host Tavis Smiley, an experience that influenced his approach as a broadcaster. He was impressed by Smiley’s authenticity in discussing issues that affected African-Americans. Smiley sounded like “somebody that you could encounter on the subway or in a supermarket,” Johnson said. “That clicked for me because that’s the way I would like to be. I try hard not to be someone who sounds so polished and perfect that I live on some firmament above everybody else.”

As WAMU auditioned prospective hosts for the job, Allman said Johnson’s “relatability” with the audience was one quality that distinguished him. “With the ambition we have of trying to bring in other voices and new audiences, that is a really key quality for us.”

WAMU has set goals for increasing the diversity of its staffing, sourcing and audience, Yore said, and those priorities shaped development and hiring decisions for 1A.

As it evaluated host candidates and decided who to hire, WAMU consulted with an advisory group of representatives from 13 stations that carry the Diane Rehm Show, Yore said.

In a press release announcing Johnson as her successor, Rehm endorsed the choice. “Our country needs a fresh voice that addresses the wonderful diversity of our nation,” she said, adding that Johnson “represents America’s future and is the right host at the right time.”

When Johnson guest-hosted the Diane Rehm Show Sept. 29 and 30, Allman said the listener response was “overwhelmingly positive” and “far exceeded responses we had previously.” Even on social media, reaction to Johnson as host was nearly all positive.

Allman doesn’t have illusions that the new program introducing an unfamiliar host won’t be subject to criticism, especially at the beginning.

“We would love it if we knew that everyone was going to love our new show and love Joshua from day one,” he said. “We know probably that’s not going to be the case.”

So he says the new team, which includes new producers and veterans of the Diane Rehm Show, will need to make sure the “journalism we have is strong, that the radio we produce is confident and it has some real direction.” When listeners call to say that they miss Diane, he wants their reactions to be along the lines of  “simply the idea of getting used to change,” and not concerns “that we’re in any way watering down our roles as public service broadcasters or as journalists.”

WAMU competes with WBUR’s On Point for audience and station carriage during the 10 a.m. time slot, but Yore is hopeful that stations now airing the Diane Rehm Show — which ranks among the top six in public radio for building audience loyalty, according to the Audience Research Analysis — will stick with the new program.  “I think the stations … are ready to hear and try something new,” he said.

NPR and WAMU have a “multiyear” distribution deal for the 1A new program, which is being offered at the same cost as the Diane Rehm Show, Yore said.

Rehm will host her last broadcast Dec. 23 and the show will air repeats through Dec. 30. She will continue to work part-time at WAMU and is developing a podcast, which Yore says will launch sometime next year. She will also help the station with development and fundraising initiatives.