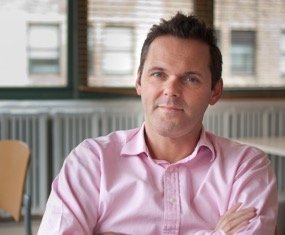 WAMU made its first big move Tuesday in rethinking its successor to The Diane Rehm Show by hiring Rupert Allman as executive producer for a new program to be piloted this fall.

Allman comes from New York’s WNYC, where he has been executive producer of The Takeaway.

“He is very experienced as a producer,” J.J. Yore, g.m. of WAMU, told Current. “He took a show that wasn’t doing all that well and made it hugely more successful, with The Takeaway.”

Yore added: “It was very clear that he understands how rare and wonderful an opportunity it is to create a new national show in public media.” The Diane Rehm Show is produced at WAMU in Washington, D.C., and distributed nationally by NPR.

Allman will begin in his new position Sept. 1.

The direction of the new program will be shaped by Allman and a new host who has not been announced, Yore said. He expects the new show, which WAMU is calling “Project X” for now, to be built from the “best of the DNA of The Diane Rehm Show.” However, WAMU is looking to “create a show that is more diverse, that is multi-platform from inception and has a more flexible format.”

For example, the successor to Diane Rehm will move away from its current format of one topic per hour. “Some days it may be two subjects, some days we may go longer on one,” Yore said.

But “the new format will continue to have a deep, civil conversation, that will be one of the characteristics of the show,” Yore said.

WAMU also plans to rethink its podcast strategy for the show so that it can grow its audience on that platform.

Yore says WAMU has a list of about 70 hosts as potential successors to Rehm. The station contracted Madhulika Sikka, who formerly worked as executive editor at NPR News, to assist in the host search.

WAMU will begin piloting the new program later this year, likely “using local air” in a different time slot from The Diane Rehm Show; its plans call for the program to go live full-time in January 2017, Yore said. Diane Rehm will retire in late 2016.

NPR and WAMU have not finalized a distribution deal for the new program, but Yore says they are “far along in discussions with them on distributing the new show.”

The station is also convening an advisory group of leaders from NPR stations that carry The Diane Rehm Show to ensure that they have a say in development of the new show.

Dean Cappello, chief content officer at WNYC, echoed Yore’s description of Allman’s achievements with The Takeaway in a memo to staff. “Rupert inherited a morning drive show trying to make a nearly impossible turnaround. He leaves us with a program that is now an influential national program, much loved by listeners AND program directors, and heard by more than two million people weekly on 272 stations nationally, and many more on-demand. … More than one person has told me over the years that ‘Rupert is the best boss I’ve ever had.’”