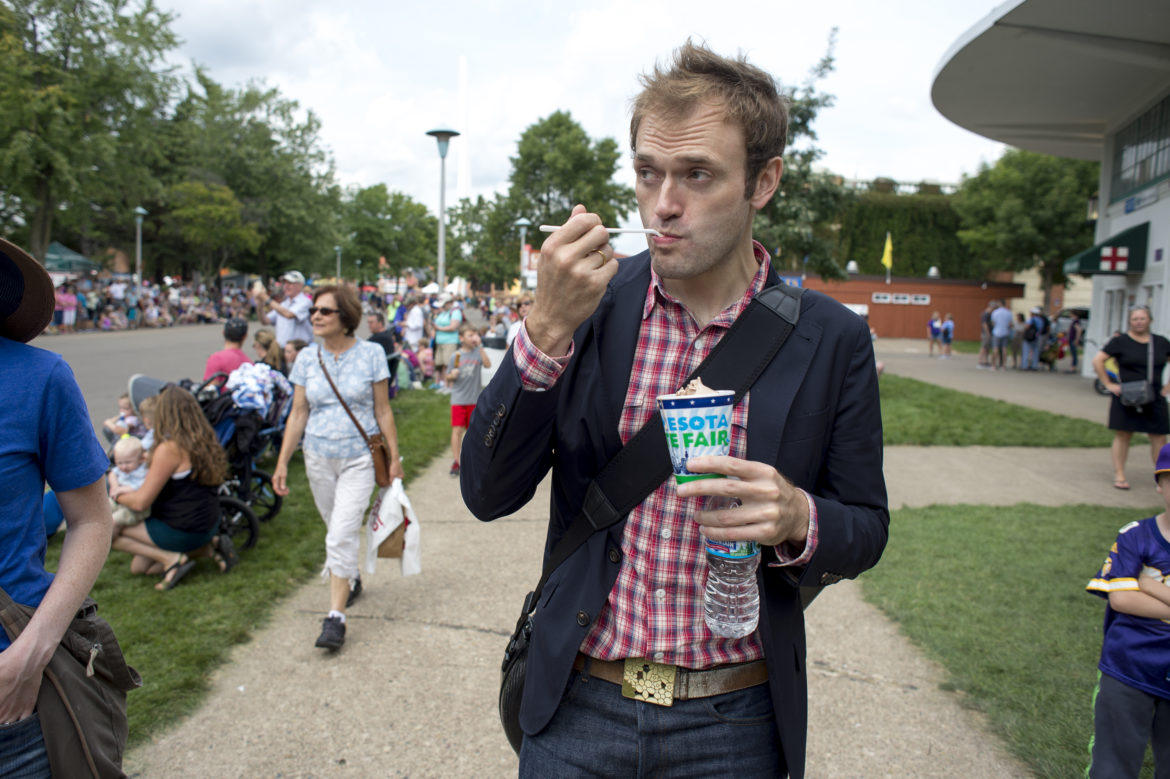 Chris Thile eats a malt as he makes his way though the Minnesota State Fair on August 26, 2016 in Falcon Heights, Minn.

At the Minnesota Public Radio booth, before the day’s first taping, the new host of A Prairie Home Companion plays a rehearsal number over the sounds of squawking geese from the young fowl trainers who will be his lead-ins. A coffee obsessive, Thile later samples Swedish egg coffee (grounds and egg, strained in hot water) at the Salem Lutheran Church, then wolfs down a chocolate malt while taking in the fair parade, which includes the Minnesota Butter Queen, “Princess Kay of the Milky Way.”

When Thile returns to the stage in honor of the fair’s Prince Night, he plays a mandolin cover of “Sign O’ the Times” live for MPR’s Triple A station The Current for an ecstatic purple-clad audience.

“You look like you could be Garrison’s fourth cousin removed,” said longtime APHC singer Jearlyn Steele, sizing up Thile on Twin Cities Public Television’s Almanac program. But she had one order for him: “Get the red socks.”

Thile, eager to prove his bona fides to Minnesotans, told Steele some of his earliest memories are of listening to APHC. “I couldn’t really distinguish between Garrison’s voice and that of my father’s,” he said.

No one has to ask which “Garrison” they’re referring to: The shadow of APHC’s founder hangs over every inch of the 320-acre fairgrounds and the state celebrated by the fair. Over the past 41 years, Garrison Keillor has turned his two-hour live variety show into Minnesota’s biggest cultural export and one of public radio’s most popular programs. According to distributor American Public Media, 3.2 million people listen to the show every week over the air. In 2015, after announcing his retirement, Keillor picked 35-year-old Thile, who has made guest appearances on the show since 1996, as his successor.

Keillor has “had perhaps the biggest impact on what I hope to be able to deliver to my fellow human beings,” Thile told Current while sitting in the back of the MPR tent, munching on fresh-baked fair cookies from a paper bag. “There’s a sense of meaning, or purpose, that Garrison helps provide.”

The two men were both raised in fundamentalist Christian households, but otherwise their stories sharply differ. Keillor, a self-described loner, grew up in Anoka, Minn., and picked up writing only after a heart condition prevented him from playing football. Thile, who eagerly socialized with crowds throughout the fair day, was raised in Southern California, began playing the mandolin at the age of 5 and released his first record fronting bluegrass band Nickel Creek at age 12.

Thile prepares to perform at Minnesota Public Radio’s booth at the State Fair.

He has also fronted the band Punch Brothers, received a MacArthur Foundation “genius grant” in 2012, collaborated with musicians including Yo-Yo Ma and Josh Ritter, and recorded an album of Bach covers.

There’s another key difference: Thile has no plans to immigrate to the Midwest. He currently resides in Portland, Ore., where his wife, actress Claire Coffee, stars on the NBC show Grimm.

But no one at the fair seemed to mind that Thile wasn’t local. Numerous fans came up to take selfies, and when he visited the craft beer tent the proprietor ended a spiel on the various local brews by professing that he couldn’t wait for the new shows.

Keillor’s last show aired the weekend of July 2 and included a call-in farewell from President Obama. Thile’s first program will be Oct. 15, and expectations are high.

Keillor’s exit is the latest in a mass changing of the guard for public radio talents who have created the system’s signature programs.

“We weighed the possibility of taking a page out of the Car Talk playbook and going into reruns,” Dave Kansas, APM programming v.p., told Current. “But we thought it was better for the audience of public radio, and the potential audience of public radio, to invest in a new generation of the program. And I think others are watching that, and maybe the other long-running programs will try to mimic what we have done.”

The Thile era will start slowly, with only 13 live episodes planned for the first season. Five of those will be taped at the Fitzgerald Theater, the program’s longtime St. Paul home. Other performances are scheduled for Philadelphia, New York, Denver, Chicago, Seattle, Nashville and California.

By contrast, in his final years as host, Keillor performed in as many as 38 shows a year. The fewer episodes will give the team room to tweak the show’s format, Kansas said.

Thile performs at the MPR booth.

Keillor is not disappearing from pubradio yet. He remains an executive producer on APHC and will likely continue to host themed cruises, according to Kansas. He also continues hosting the daily module The Writer’s Almanac and will keep his own live performance schedule, separate from the show.

APM is hoping to pull off a “Leno to Fallon” transition, Kansas said. Thile, like Jimmy Fallon, is also more in tune with social media than his predecessor, with nearly 98,000 Facebook likes and 49,000 Twitter followers.

“Podcasts are fine, and that they’re on-demand is cool, but the live element that’s possible on public radio, that is still cracklingly fresh technology,” he said. “I believe in the unique power of live entertainment of all sorts.”

There will be format changes, including more music. Thile will write and perform a new song every episode, but he believes listeners won’t notice a substantial uptick in the overall amount of music.

Keillor wrote almost everything on APHC himself. Famously, he would often wait until the day before the program to sketch the outline of his Lake Wobegon monologue. The new show will have a writing staff for Thile’s sketches, as well as a new backing band that includes two members of Thile’s Punch Brothers. Rich Dworsky, the lone musical holdover from the Keillor era, will remain as pianist and music director.

Thile also hopes to have an electric house band complementing his acoustic one on occasion. He’s pursued Vulfpeck, an Ann Arbor, Mich.–based funk band, but they turned down the offer.

But Thile will not maintain the Lake Wobegon monologues or any of the show’s other Keillor-specific creations like Lefty the Cowboy and Guy Noir, saying he would be “foolish” to attempt to mimic the bits. APHC’s structure allows for experimentation, he said.

After more than four decades of pleasant familiarity, the new APHC is suddenly a stranger to much of public radio. Thile will perform at the Public Radio Program Directors Association conference in Phoenix later this month, as part of APM’s efforts to introduce the new host.

The episodes that Thile guest-hosted during Keillor’s run give a good indication of where his interests lie. On Feb. 6, Thile welcomed Paul Simon and comedian Maria Bamford (a Minnesota native) as guests and mixed some of Keillor’s standbys, like the “Powdermilk Biscuits” jingle, with elements the show’s originator would never have included.

After explaining that he sings rapper Kendrick Lamar’s “Alright” to his 1-year-old son as a lullaby, Thile launched into a mandolin cover of the song — though he had to substitute a good chunk of the original lyrics.

The fact that most regular APHC listeners, who according to APM hover in an average age range of 57 to 60, probably have never heard of Lamar doesn’t bother Thile. “I want you to have an experience,” he said. “Do I want that experience to be 100 percent comfortable all the time? No, because that’s boring.”

APM would prefer more people who have heard of Lamar to start tuning into the new era of APHC. “We think he can reach out into that younger, more diverse audience that is really important to the future of public radio,” Kansas said.

Thile knows he is being expected to lower the listenership’s median age, but he’s wary of trying to tailor APHC specifically for young audiences and draws upon his own church upbringing as an example. “As public radio people, we need to stop that weird thing: ‘Let’s make church cool! We’ll get a rock band, and they’ll make rock songs, only about Jesus! That’ll get the kids!’ No. That won’t get the kids.”

“Young people are not dumb,” Thile added, minutes before heading back onstage. “We like good stuff. We just need to be addressed.”