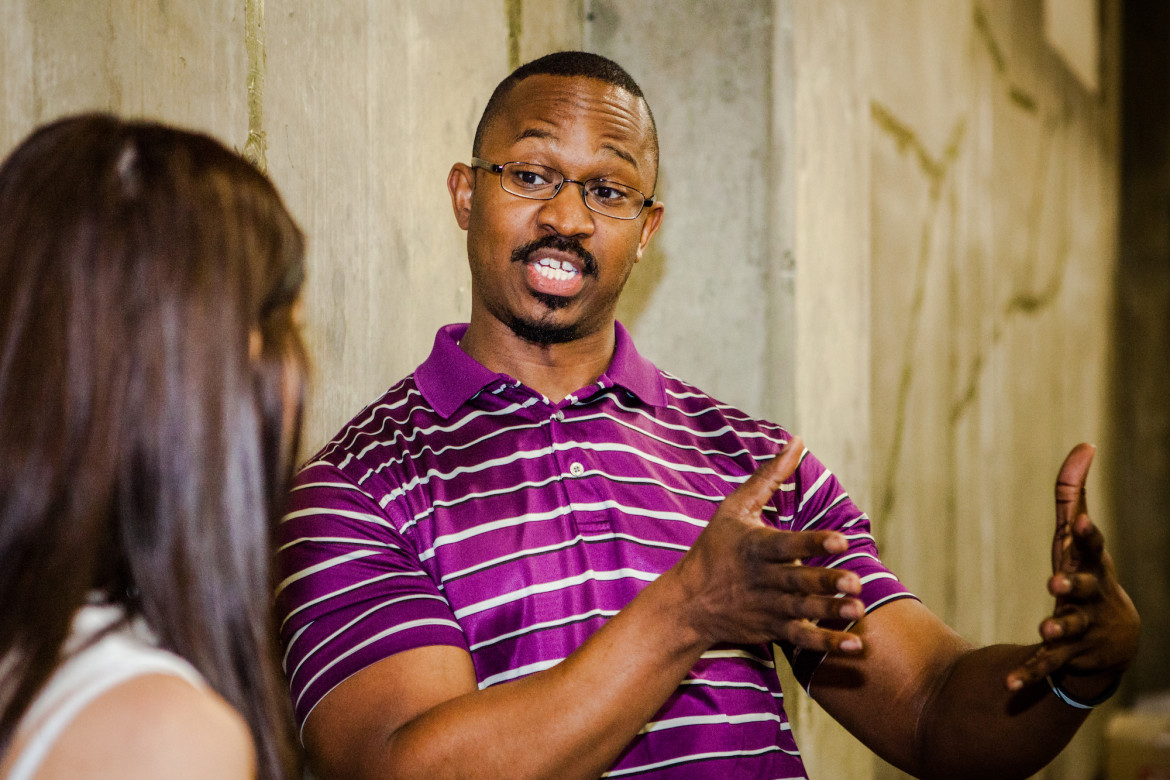 Host Joshua Johnson says Truth Be Told aims to give listeners “a vocabulary to talk about issues of race.”

Host Joshua Johnson says Truth Be Told aims to give listeners “a vocabulary to talk about issues of race.” (Photo: KQED)

A new radio pilot from San Francisco’s KQED aims to take a close look at racial tensions by getting into personal stories of race and culture in everyday life.

Truth Be Told, which combines storytelling with panel discussions, will be distributed nationally by Public Radio International next month. Producers are in the midst of piloting four hourlong episodes about race at work, on campus and in dating, as well as a program exploring the definition of whiteness. Stories collected from the public via email, a voicemail call-in line and social media fuel the show.

People are having conversations about race, “they’re just not having them on public radio,” said host Joshua Johnson. “What we’re trying to do is attract those audiences to public radio and show them how our journalistic style enhances the conversation.”

KQED’s radio team was inspired to create the show as its journalists covered local protests that grew out of the broader unrest over police killings of young black people in other cities, such as Michael Brown of Ferguson, Mo., and Tamir Rice of Cleveland.

Last fall, KQED aired five prototype episodes of an earlier version of the show hosted by Johnson, the station’s morning newscaster since 2010. Shorter segments of the series were inserted into local cutaways of the local version of Morning Edition. Titled So Well Spoken, the programs examined how issues of race and identity play out in holidays celebrations, for example, or in social media.

“The stories that people called up with were very deep and meaningful,” said Holly Kernan, KQED’s executive editor. “That gave us inspiration that people do want to talk about this despite it being painful.”

After airing So Well Spoken as stand-alone programs and local news segments, the station decided to pilot four episodes for national distribution by PRI. By sharing stories of how individuals commonly experience racial and cultural differences, the producers hope to encourage discussion about larger systemic problems.

“If we can understand these smaller encounters, we can give [listeners] a framework for dealing with the larger encounters,” Johnson said. “… Then you give people a vocabulary to talk about issues of race.”

The framework of personal encounters with racial differences also allows producers to look at issues from different points of view. In the episode about race and holidays, a Chinese-American woman described sharing news of her pregnancy with her Mexican-American husband’s family, and her sister-in-law’s comment on the baby being “part Chinese.” When the show team contacted the sister-in-law for her side of the story, she said she didn’t remember the incident and didn’t understand how she gave offense but said she would be open to discussing it.

Panelists on the show later questioned whether the sister-in-law really didn’t understand why her comments were hurtful. But Johnson turned the conversation toward the show’s goal of finding solutions.

Johnson asked a guest, NPR reporter Karen Grigsby Bates, how the two sisters-in-law should talk about the incident. Bates suggested the “old psychotherapist trick of not ‘You make me feel’ but ‘I feel like when you say this’ … rather than accusing each other.”

Johnson hopes the show provides a place for civil discussion of issues, regardless of the views participants may harbor. “Whether you agree with one side of the other, you are welcome to this conversation,” Johnson said. “We would rather have you call and trust us. … We’ll be patient with you.”

KQED’s newsroom had been reporting on the Black Lives Matter movement and protests when Kernan called for the station to develop special content dealing with racial issues, according to Johnson. The news team wanted to“do something about race, but we didn’t want it to be as reactive,” Johnson said. “We wanted to do something more insightful and more productive.”

At first, KQED staffers focussed on responses to racial issues in the news. But after producing a few podcast episodes internally, “we realized there was something to having people unpack their life experiences,” said Johnson. “… Personal stories are more illuminating.”

“We’re trying to speak plainly and conversationally,” Johnson said. “We tend to intellectualize these issues. We’re trying very hard not to put too strong a lens on this and let them tell their own story instead of telling it for them.”

Kathy Merritt, PRI’s v.p. of content strategy and development, said she thinks Johnson is an especially good fit as host. “He’s in command of the conversation,” said Merritt, who helped bring the show to the network. “But he’s incredibly skillful at being sensitive in these conversations that are really difficult for people.”

Most listeners appreciated the prototype episodes, according to KQED, but it did attract some criticism. In one episode, the show aired negative responses it had received.

“You’re not serving any purpose except to upset people,” one listener said in a voicemail. “I think this is all bull[bleep], a waste of airtime,” another caller said.

In a response on KQED’s website, Johnson said, “Whether you like So Well Spoken or not, whether you agree with the assessments of our guests or not, whether you think this approach is right or wrong, the mere fact that you are engaging with us makes you part of the dialogue. And part of the solution. … So Well Spoken is a safe space to have dangerous conversations. Pushing the critics away would violate the spirit of this project because, at the end of the day, we really do need one another.”

Meanwhile, the show began receiving a lot of positive feedback from millennials and people of color in emails and calls, according to Johnson.

“The positive feedback we got mostly came from people who didn’t hear themselves reflected in public radio even though they were listeners,” Johnson said. “A number of people said this made them proud to be KQED members.”

And while any new show faces challenges — like making the jump to weekly production and getting carriage on stations — Merritt believes Truth Be Told will draw interest from the system when PRI distributes it next month. “To me, the timeliness of the show is so important,” she said.

2 thoughts on “New KQED radio pilot gets personal about race”