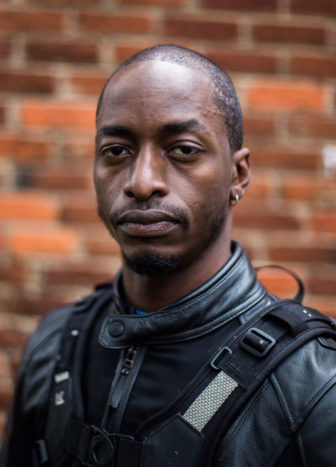 Last summer, Chioke I’Anson went to NPR headquarters to workshop a podcast he was developing. A few months later, he landed an unrelated job that made him one of the new voices for NPR’s national underwriting spots.

I’Anson, who is an instructor of African American studies at Virginia Commonwealth University, started voicing NPR credits in November alongside Jessica Hansen, who has been on the air since 2015.

“With Chioke, we expand the diversity of voices on NPR, develop a ready and familiar sounding ‘back-up’ voice, and create additional capacity for NPR’s Programming division,” Izzi Smith, senior director, promotion and audience development, said in a Nov. 11 email to NPR staff.

But how did Smith discover a university instructor to consider him for the job?

The workshop, held last summer at NPR headquarters, invited teams of aspiring podcasters to work with NPR staff in developing audio projects. I’Anson’s team was one of three among the 12 participating in the workshop to receive $10,000 backing from NPR. The podcast, Do Over, was also a semifinalist for Radiotopia’s Podquest contest.

When the podcast teams presented their projects to NPR staff at the end of the workshop, Smith was in the audience. The Post reports his reaction when I’Anson spoke about Do Over:

“As soon as he opened his mouth,” Smith recalled, “I was dumbstruck by the quality and the richness and the presence in his voice. I literally started bouncing up and down in my chair.”

This is the public radio equivalent of a Hollywood producer finding his next big star at the soda fountain: Smith is senior director of promotion and audience development, and happened to be kicking around the idea of bringing in a second person to help handle the increasing demand for voice-over talent. Even though they don’t get named on-air, the underwriter voices are among the most widely heard on NPR, reaching 30 million listeners week in and week out.

I’Anson isn’t making a full-time move to radio, however. He records underwriting spots on weekday mornings and continues to teach at VCU, the Post reports.