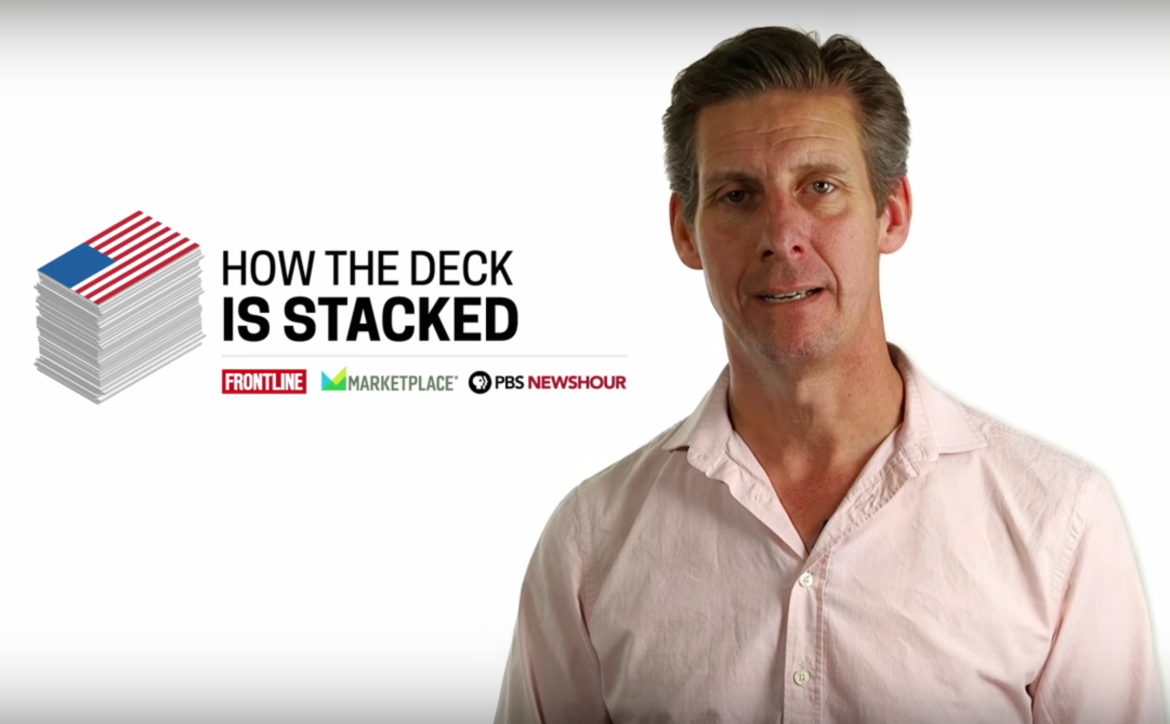 “How the Deck Is Stacked” bridges radio and TV to examine the economy.

Collaborations between radio and TV can begin at any level in public media. But teamwork between the networks, with their national reach, might stand to have the widest impact.

If collaboration between public radio and TV should grow, what are PBS, NPR and other national producers doing to expanding those relationships? We’re looking at this question as part of our Currently Curious series, in which we answer questions submitted and voted on by readers.

Amanda Honigfort, a producer at Illinois Public Media and a newcomer to the system, asked us what gets in the way of more collaboration between public radio and TV. Our post introducing this series got an enthusiastic response from Michael Oreskes, NPR’s senior v.p. of news:

@AHonigfort is my hero! @currentpubmedia @NPR and @PBS and stations should work closely together on behalf of the public in both our names.

That’s not a surprise coming from Oreskes, who stepped into his job a year ago and soon began talking up the merits of stronger teamwork between the network and its affiliate stations. He sees no reason that public radio and TV shouldn’t increase their joint efforts as well.

“One of the things you see is these younger people coming in without preconceived ideas and just asking the questions that, frankly, we all should answer,” Oreskes told Current.

With Oreskes in charge of NPR News, journalists at the radio network and PBS NewsHour are coming together to expand their joint coverage of topics including health, politics and global news. The presidential election in particular has given the TV and radio news organizations a chance to develop cross-platform coverage for both of their audiences.

So far, the NewsHour produced the Democratic debate in Milwaukee Feb. 11 and shared the audio with NPR, which fed it to member stations. The radio network also provided video of the debate on its website courtesy of the NewsHour. Their teamwork on shared coverage will extend to the upcoming Republican and Democratic National Conventions.

Another project grew to include NPR member stations and provided a template for future reporting. In January, NPR and NewsHour launched Let’s Get People Talking, an effort to “create a national conversation” focused on the question of why voters feel so fearful and anxious.

NPR’s Mara Liasson reported for Morning Edition, and the next night, NewsHour aired a related story. Around 30 radio and TV stations in 17 states then highlighted the same question with reports and talk-show segments of their own. They shared that programming with NPR, which drew on it for follow-ups.

“I’m 100 times more concerned about our disintegrated infrastructure than I am about terrorists,” wrote a New Hampshire Public Radio listener in a Facebook comment read on the station’s show Word of Mouth. “I’m more likely to get killed by a bridge falling on my head than ISIS.”

“I feel like it’s a show, like a clown show,” a Georgia woman said about the election to a station reporter.

“We want to do this more during the election,” Oreskes told Current. “And we want PBS and its stations to be involved. We can really use the power of the public media network to trigger a national conversation around the election.”

TV on the radio, and other challenges

NPR and NewsHour also share stories across their websites, and NPR journalists such as Steve Inskeep and Allison Aubrey have appeared on NewsHour.

“Both of us believe that in this day and age, the consumers of television, radio and digital are media consumers,” said Sara Just, e.p. of NewsHour. “And we should serve them in the most effective way we can. The same kinds of people are consuming regardless of medium.”

The audiences of NPR and NewsHour do overlap: One in six NewsHour viewers listens to NPR, and about 5 percent of NPR’s audience watches the TV show, according to researcher GfK MRI.

Moving ahead, Just and Oreskes are considering joint foreign coverage as they near the Rio Olympics. “The NewsHour basically buys tape from others” to deliver international coverage, Oreskes said. “It doesn’t have a lot of manpower.” But NPR has a relatively large team of international reporters among news organizations. “Could we find a way to work together to maximize the reach of the NPR foreign correspondents to the benefits of the entire audience of public media?” Oreskes said.

Oreskes said he believes public media should have an integrated newsgathering organization that creates content for the various outlets and platforms that need it. When asked whether the BBC provides a model for what that would look like, he pointed out that the BBC still has internal silos. (In fact, its director-general is reportedly planning to merge some radio and TV divisions at the network).

So “a lot of it is about the desire to do this together,” Oreskes said. “A lot of opportunities don’t have to do with whether we’re all inside one company or not. We can still work together if we choose to.”

Some challenges do hinder these partnerships. Repurposing radio reporting for TV and vice versa demands additional work. For example, NPR has to consider how to fill its airtime when films are shown during the political conventions. “The NewsHour can show the film,” Oreskes said. “But what does it mean to show the film on the radio?”

Another barrier to collaboration arises when organizations want to protect the work they do, Oreskes added. “Everyone thinks their quality is the best,” he said. “They don’t want to undermine it.”

Despite these barriers, “the potential reward for working together is huge,” Oreskes said.

Just of NewsHour agreed. “We can’t be the best program that we can put on at 6 and on digital unless we collaborate with others and bring together not only the best stories we can produce,” Just said, “but also the best and most interesting stories that we can share and highlight from colleagues.”

The NewsHour has also teamed up with American Public Media’s Marketplace, another previous collaborator, and Frontline to launch “How the Deck Is Stacked.” Extending through January 2017, the series of multiplatform reports will examine the gap between rich and poor in the U.S.

No single CMS, but other tie-ins

On the technological front, radio-TV teamwork is also afoot — though the differences between the media do create some difficulties.

Our Currently Curious questioner Amanda Honigfort wanted to know why public media lacks a content management system that can accommodate both TV and radio stations, as well as the joint licensees whose websites feature both kinds of media. Her station’s webmaster built their website from scratch rather than use NPR’s Core Publisher or PBS’s Bento, she said, because neither system suited both radio and TV.

But the departments at NPR and PBS who oversee these CMSes say one system for both media isn’t feasible.

“Given the basic differences in the content NPR and PBS focus on — that is, audio and video, respectively — as well as the various platforms through which each organization’s content is distributed, it would be challenging to find a single, one-stop-shop CMS,” said Scott Nourse, v.p., product development for PBS Digital, in an email.

“In an ecosystem where we want to elevate and lift public media in general, we need to create better ways for these systems to talk to each other and share experiences,” said Stephanie Miller, managing director of NPR Digital Services. “But I don’t know if trying to invest in a single CMS is really a wise investment, if you think about the complexities and business models.”

However, Miller pointed out that Core Publisher offers features that aid websites with  public TV content. Core Publisher supports PBS’s COVE video platform and can integrate a schedule widget from PBS. Both NPR and PBS will be releasing content into the Public Media Platform as well, Miller said.

In another digital initiative, PBS and NPR have been working together to help joint licensees share member data and allow users of NPR and PBS apps and websites to create a common account across all services. That is “a long-term goal,” Nourse said.