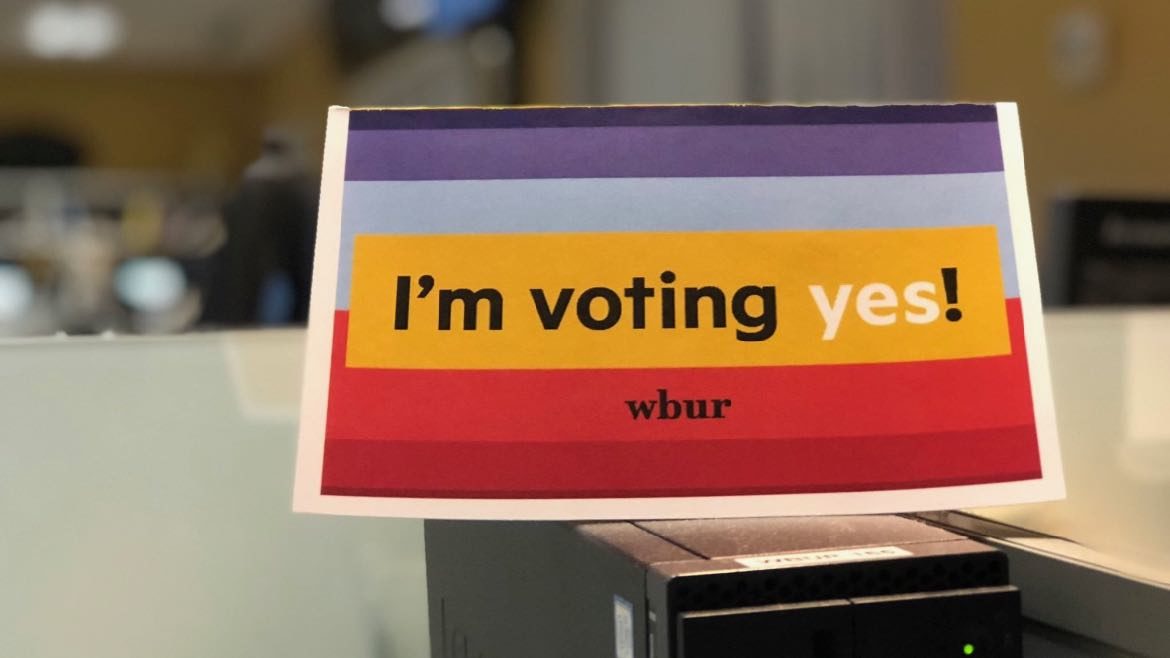 Employees at WBUR in Boston got serious earlier this year about changes they wanted at the station.

Last year’s firing of On Point host Tom Ashbrook had exposed a rift between employees and management. Boston University, WBUR’s licensee, hired a consultant to study the station’s workplace culture. The report found low morale and poor communication between staff and management.

The consultant recommended ways to improve the station’s internal culture, including improving communication, more accountability among leaders “and a greater awareness of the impact of the leadership style on station culture.”

The survey got staffers talking about changes they wanted at the station and how they could be involved in discussions about them, according to digital producer Ally Jarmanning. Fixes weren’t  coming fast enough. Employees “didn’t feel like they had anywhere to go,” she told Current, and felt that their issues weren’t being heard.

Staffers announced plans in February to join a union. Today, about half of the station’s employees are part of the Screen Actors Guild-American Federation of Television and Radio Artists union. They’re feeling hopeful for change at the station as they negotiate their first contract, according to Jarmanning, one of the union organizers. Joining the union has made staff feel “a little bit less alone in their issues and a little bit more powerful in this system where the employer really makes all of the decisions for you,” she said.

The WBUR employees are joining colleagues at 11 other public radio stations under contracts with SAG-AFTRA. As part of our Currently Curious series, an anonymous reader asked, “What’s behind the recent wave of unionizing at public radio stations? Has it helped workers?”

We surveyed public radio employees in unions and spoke with union stewards and organizers at some of the stations where employees have joined SAG-AFTRA since 2016. Staffers cited similar reasons for why they decided to organize, including a desire for pay equity and wanting a stronger voice in shaping their stations’ futures. Overall, they say joining unions has helped them make progress toward these goals.

The percentage of U.S. workers in unions has declined steadily since 1983, the first year the U.S. Bureau of Labor Statistics made comparable data available. But public radio’s unionized ranks have grown steadily.

Most recently, content creators at WHYY announced this month their intention to join SAG-AFTRA. Since 2016, five public radio stations have voted or announced their intent to join the union. And in January, New York Public Radio voluntarily recognized an expansion of its SAG-AFTRA bargaining unit.

Public radio is a “small world,” which has helped fuel the growth of unions in the industry, said SAG-AFTRA Chief Broadcast Officer Mary Cavallaro. Staffers at different stations are regularly in contact, she said. Employees at nonunion shops often initiate contact with SAG-AFTRA after talking with colleagues at unionized stations, she said.

Unionization has grown in public media “and also in other platforms as well because people are sharing ideas and sharing this desire to have a voice at work,” Cavallaro said.

The public radio newsrooms joining unions are part of a broader trend of organizing at news outlets, especially digital newsrooms. Journalists “want to be treated like professionals,” said Marick Masters, director of the labor studies program at Wayne State University in Detroit. “They want to have some assurances about the integrity of the work that they do. They also want to have some input over pay and benefits.”

Staffers at WBUR were inspired by union efforts at the Chicago Tribune and the Los Angeles Times, Jarmanning said, as well as at other public radio stations. That included WBEZ in Chicago, which unionized in 2013, and Minnesota Public Radio, where employees voted to join SAG-AFTRA in 2016.

At WBUR, one benefit of following other stations in joining a union has been the ability to draw on contract language from other shops, Jarmanning said.

Organizers at WBUR used their journalism training to learn more about the process. “We reached out to these other places and asked them how it worked and what did they think of SAG-AFTRA,” she said. “… They told us it’s definitely worth doing, but it’s not easy.”

Employees at WBUR, MPR and KUOW in Seattle describe similar reasons for wanting to unionize. In Seattle, the city’s economy and pay inequity at the station spurred the push to join a union, according to newscaster and union steward Paige Browning.

Seattle’s cost of living has been rising, according to the U.S. Bureau of Labor Statistics’ Consumer Price Index, and the city is the country’s seventh–most-expensive to live in, according to the most recent data from the Council for Community and Economic Research.

KUOW staffers believed that salaries were too low for the city’s high costs, Browning said. The lowest-paid full-time staffer now represented by SAG-AFTRA was earning as little as $38,000 in 2017, according to salary data from the University of Washington, KUOW’s licensee.

Employees felt that they “had to figure out how to live in Seattle and still work at KUOW,” she said.

Staffers were also hoping to close gaps in pay that particularly affected producers and reporters at the station, Browning said. The public data shows gaps of more than $20,000 among similar positions. And industry-wide changes in journalism also made unionizing appealing, she said.

“We write, we record, we edit, we do website and social media,” Browning said. “We do so many different things, which I think is great, but it also means the industry is changing so much, it’s changing our jobs. Because of the pace that the industry is changing, it does give me more confidence now that we’re in a union, that we can help direct where things go.”

The KUOW employees ratified their first contract earlier this year after forming a union under SAG-AFTRA in 2018. Since forming the union, Browning said, workers at two other stations interested in unionizing have contacted her.

MPR employees also sought a stronger voice within their organization when they decided to unionize following unexpected layoffs in 2015, according to reporter and union steward Jon Collins. The layoffs included staff photographers, which “took a bite out of our ability to compete in the local media scene here,” he said.

“We didn’t feel like we were getting good answers” about the layoffs, Collins said. “And there was no way for us to hold management accountable.”

Employees decided to organize in part so that policies didn’t “just come down out of nowhere” from management, he said. They were also concerned about low pay at the station. Some employees earned as little as $29,000 annually, Collins said, causing the station to lose “good young talent.”

The organizers at the three stations said that joining unions did bring about positive changes. In addition, 16 of the 18 staffers who responded to Current’s survey for public media employees in unions said representation had resulted in positive effects.

At WBUR, pay inequity was also a top concern, Jarmanning said. Unionizing has given employees access to salary information, enabling them to conduct a pay study and determine equitable salaries.

Forming a union at WBUR did have a downside, however. Jarmanning said some staffers not in the union have said they “feel a little left out.”

“It’s hard because we have this thing to advocate for ourselves through,” she said, “whereas if you’re in the underwriting department or in marketing or whatever, you don’t have that source of advocacy.”

At KUOW, ratifying a contract raised some salaries by as much as $20,000. Some producers and some reporters received the biggest increases, Browning said.

“It’s going to change several people’s lives dramatically because they were making such low salaries before,” she said. “And anyone new that’s hired on is going to basically live in and around Seattle and do their job and not have to worry as much about living paycheck to paycheck.”

The union staffers also wanted more transparency from management, which Browning says has improved because of the union contract. Now a union steward can attend board meetings on paid time, she said.

The unionization process “has opened up lines of communication that maybe weren’t there before,” Browning said. Employees “already have a better relationship with some of our board members in talking about the finances,” she said.

In future contracts, the union staff will seek a seat on the station’s board of directors. The board and the University of Washington did not agree to that stipulation in the first contract.

Organizing the union at KUOW did create “a lot of work for a small group of people,” Browning said. “We were just learning as we went.”

The first contract at MPR also improved salaries. It guaranteed annual pay raises for employees in the unit and included mechanisms to raise the minimum salary and increase salaries of lowest-paid employees more quickly, Collins said.

The union has also helped communication between management and union employees, Collins said. Union members were able to offer input when management was drafting a code of ethics. A labor-management committee allows employees to raise issues with management that might not otherwise come up in contract discussions, such as hiring practices to increase staff diversity.

The union and management “have a much better relationship now than we did originally,” Collins said. “We both do understand that we have to interact together, and we’re better off if we do this in a harmonious way rather than a combative way.”

At WBUR, it’s too early to say whether the union has helped workers, Jarmanning said. But she does believe that “in a year’s time, WBUR will be an even better place to work than it is right now … not just because of what’s in the contract, but because of the conversations that we’ll have with management as a result. Like … ‘I didn’t realize this person was having this issue.’ It will really just bring things to the surface.”