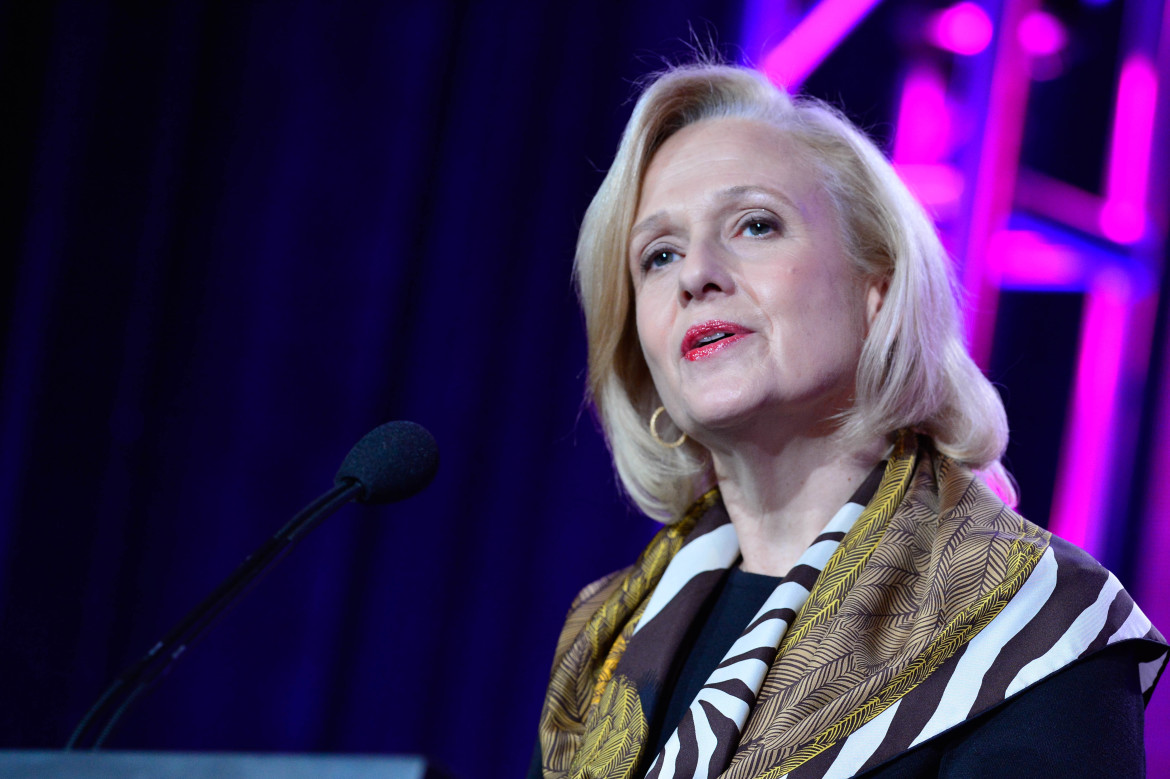 Kerger said she was concerned about ensuring “that the entire country is covered” by over-the-air public TV after the spectrum auction. (Photo: Rahoul Ghose/PBS)

Kerger said PBS has worked to convince station license-holders to stay on the air rather than give up spectrum in the upcoming FCC auction. (Photo: Rahoul Ghose/PBS)

Speaking Monday to TV critics and writers attending the PBS portion of the Television Critics Association winter press tour, Kerger also reflected on the lasting impact of the hit series Downton Abbey, currently in its sixth and last season, and on early indications of success for Mercy Street, PBS’s new Civil War series and its first American drama in a decade.

Regarding the spectrum auction, Kerger said that FCC rules preclude her from discussing individual stations. But she noted the threat of some stations going dark if their licensees choose to auction off their spectrum.

“To be candid, I am concerned, as this moves forward, to make sure that the entire country is covered and able to receive television over the air,” she said.

About 11 percent of the country relies on over-the-air television only — more if you add households that have some sets attached to cable or satellite but others that get only broadcast signals.

“I am particularly concerned about parts of the country, rural areas where over-the-air is important and those in low-income families or where residents are older,” Kerger said. “They tend to be over-the-air households, and those are people who often rely on public television.”

It complicates matters that some stations are owned by states and universities that will weigh the decision to sell spectrum along with their own needs for revenue, Kerger said. “We’ve tried to reach out to the license-holders to help them understand the importance of having a public media presence in the community,” she said.

Kerger explained that PBS requires that its member stations broadcast over the air. “There is not a scenario where a station would just be a cable-only entity,” she said.

Asked to reflect on the impact of Downton Abbey, which began its final season Jan. 3, Kerger said the show likely will pave the way for more series that run for several seasons.

“We have invested a little bit more in a range of dramas and, particularly, we’ve looked for series that have potential to come back rather than just one-offs,” she said.

Only recently has PBS put a premium on series with longer arcs, such as Call the Midwife and Grantchester, which returns for a second season March 27, and Mr. Selfridge, which returns the same day to start its fourth and final season. In addition, Kerger announced that a fourth season of Sherlock with Benedict Cumberbatch will likely premiere in about a year.

“We’re looking for, not projects that are going to run for the next 10 years, but projects where you have characters that your care about that you’d like to see develop over a longer period of time than just a couple of episodes,” Kerger said. “That, I would say, is the biggest difference.”

Kerger said PBS knew Downton Abbey would do well but did not expect it to turn into a TV phenomenon. Initially, PBS hoped it might run for three seasons.

“I think it just happened to hit at the right time,” she said.

Viewers were also more receptive to the new seasons premiering in January instead of in the fall, as was done in Britain. “After the holidays, people are exhausted and want to be home,” Kerger said. “It just was beautifully done, beautifully cast. I think sometimes the stars align.”

Meanwhile, Kerger said, Mercy Street is off to a good start with a 2.2 overnight national rating that exceeded expectations. The show’s audience will grow even more when it reflects viewers watching it within a week of broadcast and the 200,000 who streamed it before the premiere.

But it’s too early to announce a renewal for a second season, she said. Kerger said she has not seen any scripts for a new season, “but I will say that we very much left the door open for a Season Two, and we’ve done what we need to do to make sure there could be a Season Two.”

Finding Your Roots started its third season earlier this month following a controversy over a 2015 episode in which host Henry Louis Gates Jr. removed information at the request of actor Ben Affleck, whose ancestors were discovered to have owned slaves.

Kerger said PBS conducted “a fairly deep dive” into what happened and what changes needed to be made. Recommendations that resulted from what Kerger called “a learning experience” were adopted by the producers, including conducting additional research and hiring an independent genealogist to review results.

Kerger said she is comfortable that the changes will prevent similar problems and noted that the show is enjoying its best ratings ever this season.

UPDATE: PBS also announced a documentary about the musical Hamilton, plans for election coverage and more.