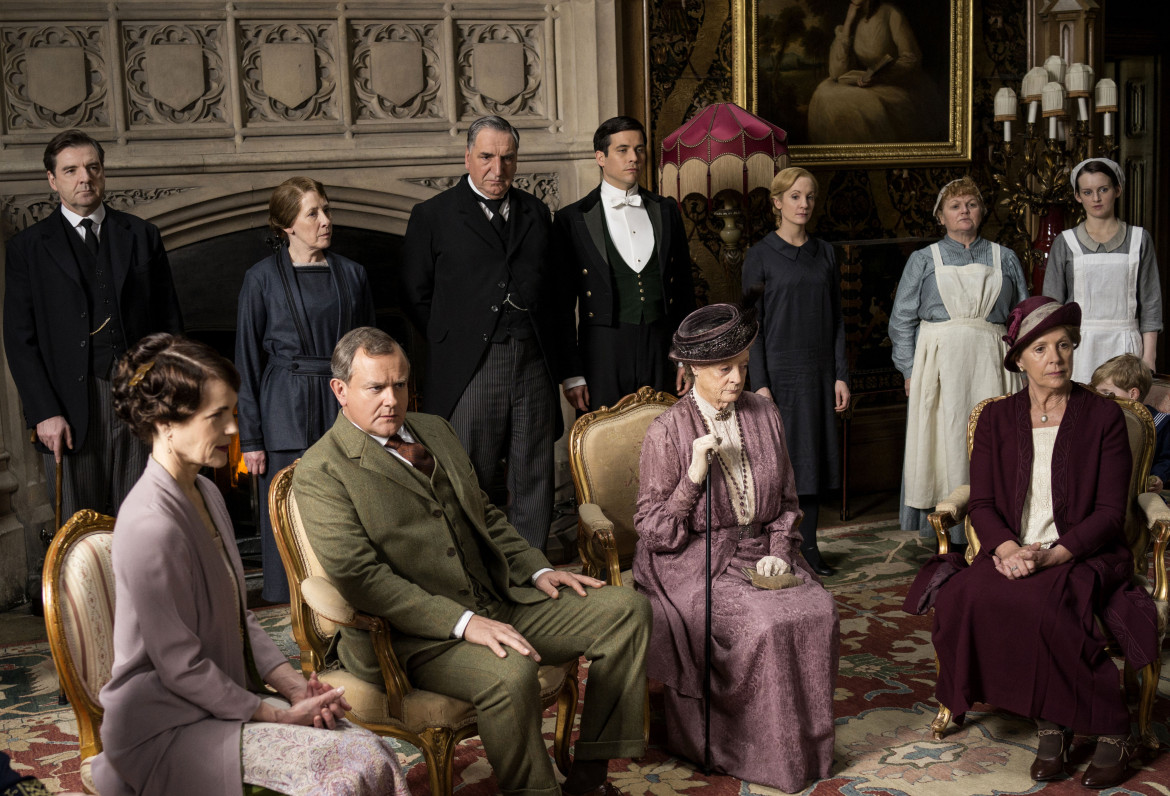 Downton Abbey, Season 5 MASTERPIECE on PBS Sundays, January 4 - March 1, 2015 at 9pm ET Episode 2 Rose hits on a strategy to get a radio in the house. Sarah tutors Daisy. An art historian arrives. Anna makes a difficult purchase. SHOWN: BRENDAN COYLE as John Bates, ELIZABETH McGOVERN as Cora, Countess of Grantham, PHYLLIS LOGAN as Mrs Hughes, HUGH BONNEVILLE as Robert, Earl of Grantham, JIM CARTER as Mr Carson, ROBERT JAMES-COLLIER as Thomas, MAGGIE SMITH as Violet, Dowager Countess of Grantham, JOANNE FROGGATT as Anna, LESLEY NICOL as Mrs Patmore, PENELOPE WILTON as Isobel Crawley and SOPHIE McSHERA as Daisy (C) Nick Briggs/Carnival Film & Television Limited 2014 for MASTERPIECE This image may be used only in the direct promotion of MASTERPIECE CLASSIC. No other rights are granted. All rights are reserved. Editorial use only. USE ON THIRD PARTY SITES SUCH AS FACEBOOK AND TWITTER IS NOT ALLOWED. 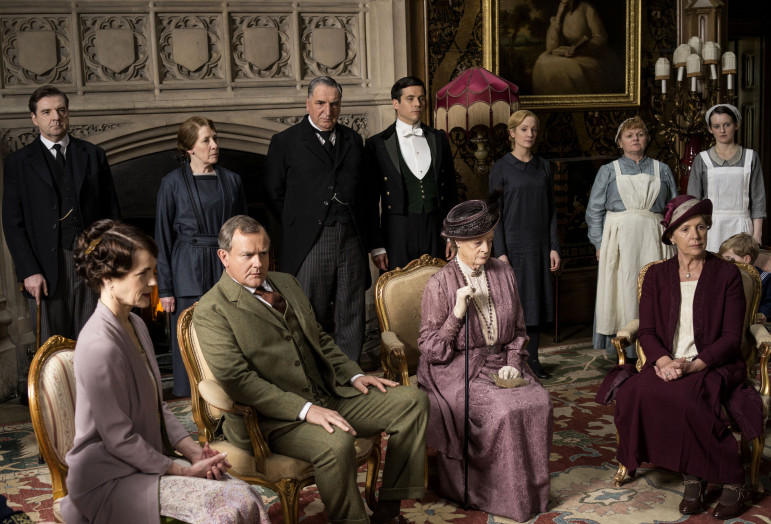 Just as the first radio address by King George V puzzles and confounds the Grantham family and their servants, Downton Abbey’s final season is causing consternation about the future within public TV. (Photo: Nick Briggs/Carnival Films)

The iron gates of Downton Abbey may clang shut for good after next season, but public TV marketing executives hope that Lord and Lady Grantham have opened new doors to sponsors and viewers during the show’s spectacular six-year run.

The swan song of Downton Abbey, public television’s highest-rated series ever, is likely to be a hot topic at the annual Public Media Development & Marketing Conference in Washington, D.C., July 9–11, one of the industry’s largest gatherings. The confab will feature a roundtable called “Selling Downton Abbey’s Final Season.”

For many marketers, however, squeezing the most from the blockbuster’s finale is less important than figuring out how to fill the gaping hole it will leave in underwriting revenue. That gap means more pressure on signature prime-time series like Nova and Antiques Roadshow, and on new arrivals. It also highlights the importance of renewed efforts by PBS to pump up underwriting sales for public television stations.

“We have new shows from each category genre coming up that we are excited about representing,” said Suzanne Zellner, v.p. of corporate sponsorship at Boston’s WGBH and head of the Sponsorship Group for Public Television, which identifies and markets the network’s strongest underwriting prospects each season. She’s particularly upbeat about WGBH’s I’ll Have What Phil’s Having and kids’ fare Ready Jet Go!, Dinosaur Train, Wild Kratts, Super Why! and The Cat in the Hat Knows a Lot About That!

But none of these new shows are likely to have Downton’s underwriting chops.

“We had multiple markets that generated over $180,000 a year from Downton. How do you replace close to a million dollars in revenue across these stations?” asked Jim Taszarek Jr., managing director of Market Enginuity, which sells underwriting for PBS SoCaL in Los Angeles, KERA in Dallas, Georgia Public Broadcasting, WVIZ in Cleveland and TPT in Minneapolis. Several of those stations pulled in over $200,000 a year from the series.

“We took advantage of [Downton], and we made sure we sold it for what it was worth — a lot more than the average,” Taszarek said.

Gordon Bayliss, longtime v.p. of sales and marketing at WNED in Buffalo, N.Y., noted that never in his public broadcasting career had he seen sponsors renew a year in advance until Downton came along.

And yet the show’s departure from broadcast TV is more bittersweet than major catastrophe — like a five-star chef departing but leaving a restaurant that’s busier and better-known. Downton’s halo effect spread to other parts of the PBS schedule, especially Masterpiece, and may linger. Its reign both coincided with and fostered a period of programing innovation at PBS under Chief Programming Executive Beth Hoppe. It created buzz and opened doors, a number of executives and consultants said.

As Downton winds down, PBS is ramping up its focus on long-term underwriting strategies locally and nationally. Led by Betsy Gerdeman, senior v.p. of development services, PBS has developed concerted initiatives to provide sponsorship research, training and resources to stations, starting with its top producers — WGBH, WNET in New York, and WETA in Washington, D.C. — and expanding from there.

It’s hard to overstate the impact of Downton Abbey. It is not only the most popular drama in PBS history, it’s one of the most-watched on U.S. television, with Season 5 seen by an average of 12.5 million viewers. Full episodes were streamed 12.6 million times across PBS and station digital platforms, according to PBS.

A huge presence on social media, Downton also set records for tweets about a PBS show, with Season 5 generating more than 190,000 total tweets and more than 24 million total impressions.

Downton Abbey creator Julian Fellowes and Executive Producer Gareth Neame are currently filming the last few episodes of the sixth and last season of the drama, which is produced by NBC’s Carnival Films and Masterpiece.

PBS’s Sunday-night Masterpiece block, anchored by Downton, has been sold out nationally for three years running with two long-term sponsors, Viking River Cruises and Ralph Lauren, and “continues to be an in-demand property,” said Zellner.

WGBH’s overall local sponsorships, which have also been buoyed by the show, grew steadily by 35 percent over the past five years and are projected to rise again in fiscal 2016.

The Earl of Grantham and his kin aren’t totally alone in the underwriting aristocracy. Nova, which anchors Wednesday night’s science and nature block, has been sold out several times over the last few years, and Antiques Roadshow’s long-term relationship with sponsor Liberty Mutual continues through 2017, Zellner said. Frontline has several funders, and “interest in the series remains strong.” All three are WGBH productions.

Miniseries The Roosevelts: An Intimate History, which aired in September, and Ken Burns Presents Cancer: The Emperor of All Maladies, a film by Barak Goodman based on the book by Siddhartha Mukherjee, were major draws over the last year. But such classic PBS documentary series create spikes in revenue without necessarily contributing to a longer-term trend, public TV marketing veterans noted.

“We worry that maybe we had seen the high with Downton Abbey,” Reed said, but he noted that Mr. Selfridge (another Masterpiece title) is doing well Sundays, and the audience for Tuesday’s history block is growing. Thursday nights, when stations schedule their own programming, are not performing as well as other nights, Reed said.

Public TV ratings data are hard to come by and underwriting revenue data even harder. Individual stations’ fiscal years don’t always align with PBS’s or CPB’s, and station performance fluctuates wildly based on size, location, viewership and other factors. Public television is so compartmentalized between the local and national levels, and among various station types and interests, that it complicates efforts to compare underwriting performance.

“It’s important to have clear information, and I don’t feel we have that today,” said Taszarek. “It’s really hard to see how the stations are performing [overall]. People report corporate revenue differently, so to me it’s hard to see what’s been happening.”

Though PBS trumpeted Downton’s ratings far and wide, the lack of clarity in overall viewership trends has a constraining effect on sales pitches of local underwriting reps. “We don’t focus on ratings,” Taszarek said. “We try to take advantage of spikes, but our local story is about a big audience and a very engaged audience, and if we’re doing that we’re not as dependent on ratings.”

Reed described additional reasons for stations to avoid talking up ratings with potential sponsors: the older-skewing demos of public TV’s core audience. Stations focus on other data, like the percentage of viewers with a four-year college degree.

“It’s more of a relationship,” he said. “People love the station, and underwriters know there are viewers out there, but not necessarily who or how many.”

“Research told us that media planners and marketers are very open to working with PBS but not well-informed about what’s on our air and who’s in our audience,” she said.

The Sponsorship Sales Support Initiative seeks to establish distinct brand positioning for PBS, using the message “Get Them While They’re Thinking.” Its staff created a web portal — pbs.org/sponsorship, now in beta — for media buyers to learn about public television’s audience and content, and launched ad campaigns in markets where ad agencies are located.

The sponsorship sales group is planning tutorials for stations on best practices in corporate sales and sponsorship, and is helping them with long-term planning, training and research. It recently launched a pilot program with 15 stations to test new corporate support resources and tools.

With Downton going off the air next year, the efforts may have started in the nick of time. A similar membership initiative for stations, the Contributor Development Partnership, has been immensely successful in attracting individual donors for stations. It has brought in $35 million in fresh revenue since launching four years ago.

Taszarek described CDP’s results as “pretty impressive,” and noted, “I hadn’t seen anything [equivalent to what the CDP does] on the underwriting side.”

By the way, Downton most likely boosted membership as well, although CDP project director Michal Heiplik said the impact is impossible to quantify.

“Stations don’t ask [donors], ‘Did you give because of Downton?’” he said.

Correction: An earlier version of this story used the incorrect title of WGBH’s I’ll Have What Phil’s Having.