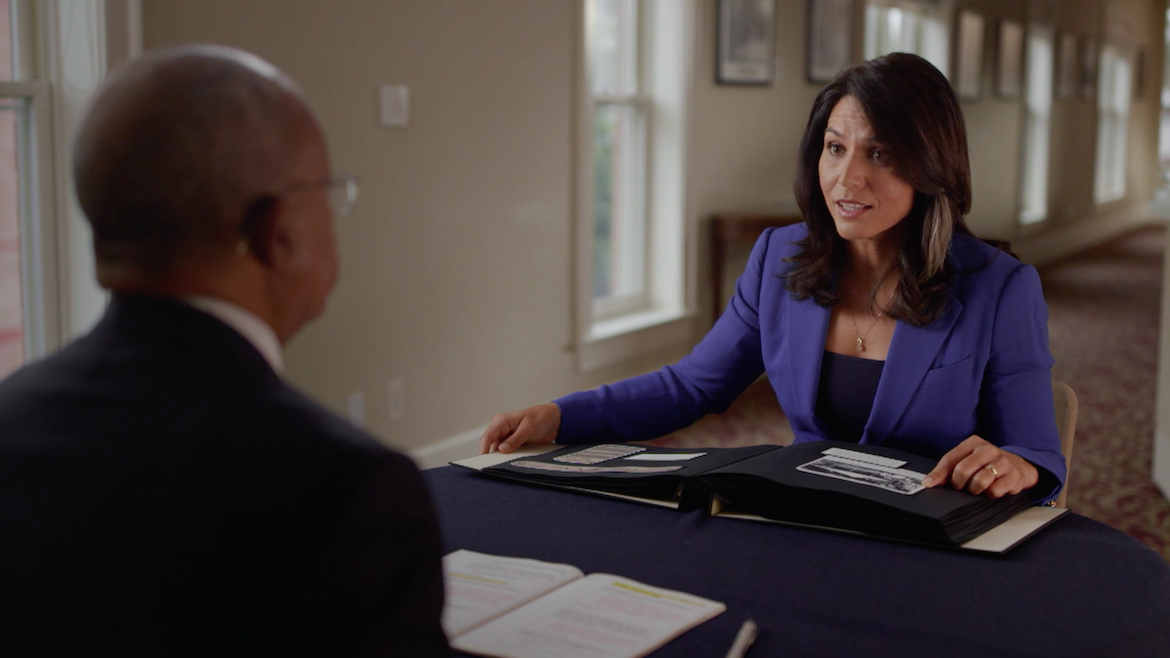 Oregon Public Broadcasting declined to air a Feb. 12 episode of PBS’ Finding Your Roots that featured a declared 2020 presidential candidate, while other stations questioned whether the show could trigger complications with FCC equal-time requirements.

Rep. Tulsi Gabbard (D-Hawaii) appeared on an all-politics edition of the program, which traces genealogies of celebrities and public figures. It aired less than a month after she announced her candidacy. In the episode, host Henry Louis Gates Jr. described Gabbard as “a rising star on the national stage.” The night it aired, Gabbard’s campaign Twitter account retweeted a promotional link to the episode.

OPB CEO Steve Bass had his statewide dual licensee pull the episode before it aired. He told Current that he was nervous about providing public TV airtime for a declared presidential candidate.

“At the beginning of a presidential candidacy, to be doing a valentine to one candidate, I just don’t think it’s a very smart thing to do,” Bass said. The decision to pull the episode was easy, he said, as Gabbard’s participation “could be used for other candidates to say, ‘Look, you did this for this person. Where’s my twenty minutes of positive coverage?’”

Bass said that in general he doesn’t think having politicians on Finding Your Roots “is such a great idea.” He pointed out the show’s months-long lead time makes it difficult to respond in the event that a guest decides to run for higher office.

One concern among stations was that the episode could violate FCC “equal time” standards, which prohibit broadcast networks from giving more airtime to one presidential candidate than others. In an email to member stations obtained by Current, Bill Weber, PBS VP of government affairs and associate general counsel, said “some stations have asked” if the episode could run afoul of the FCC.

PBS reviewed the episode before it aired and confirmed with the FCC that it would not violate equal-time considerations, said PBS spokesperson Jennifer Byrne. Neither Gabbard nor other declared candidates have qualified for the ballot in any primary state, which put the episode in the clear, Byrne said.

“Only a small handful of stations were considering not airing the episode,” Byrne said. She noted that in addition to Gabbard, the episode included Paul Ryan and Sen. Marco Rubio (R-Fla.), “political figures with differing political views and backgrounds.”

The PR firm representing the show did not return requests for comment. Neither did WETA, Finding Your Roots’ producing partner. McGee Media, a co-producer on the series and a producer of other of Gates’ public TV shows, directed comment to PBS.

Currently airing its fifth season, Finding Your Roots has previously featured politicians, including Sen. Bernie Sanders (I-Vt.), also a 2020 presidential candidate, and strategists Valerie Jarrett and Ana Navarro. Bass said he wouldn’t want to run a rerun of the Sanders episode during the campaign, either.

PBS believes that Roots is “a bona fide news interview program under FCC precedent,” so reruns of the Gabbard episode would not trigger equal-time considerations if she does become a legally qualified candidate, Byrne said.

Station heads elsewhere also researched the matter. WyomingPBS GM Terry Dugas had been on the fence about whether to run the episode but looked up the federal code and decided the show didn’t pose a problem. The station received no viewer complaints about the episode, Dugas said.

“I think PBS made the right choice in leaving the decision to broadcast the program up to the individual stations,” Dugas said.

Bass said PBS’ explanation satisfied him legally but added that he is less likely to trust that the Roots team treats the show as a “news” product because of how it handled a previous controversy involving Ben Affleck. The actor successfully lobbied the producers to keep information about his slaveholder ancestors out of his 2014 episode. Details about the negotiations were revealed in a 2015 hack of Sony Pictures Entertainment emails by WikiLeaks.

In response, PBS postponed the third season of Roots until 2016, demanded the program hire a fact-checker and pulled the Affleck episode from rebroadcasts for failing to meet its editorial standards. Gates also apologized to PBS for his handling of the issue.

“I just think that was badly handled,” Bass said of the Affleck situation. “It demonstrated a flawed editorial process, and I just kind of wonder after this whether there’s a clear-thinking approach to what they’re doing, in all its ramifications.”