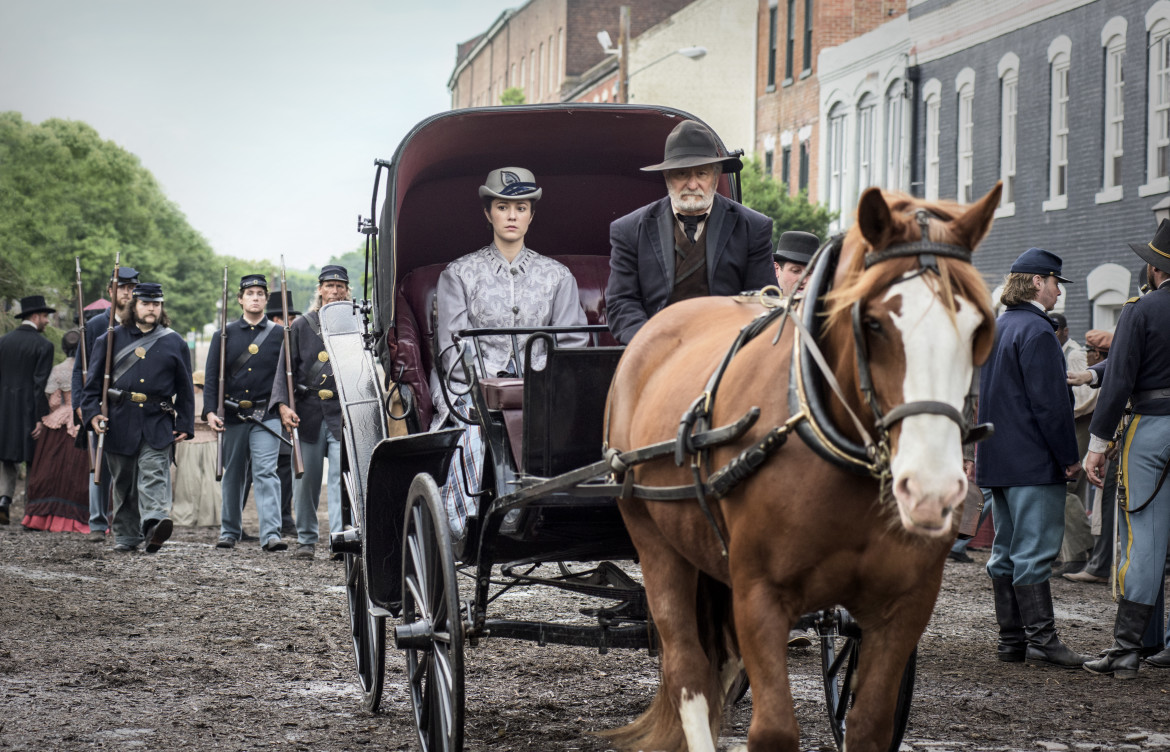 PBS is pulling out all the stops to promote the Sunday debut of Mercy Street, its first original American drama in over a decade.

As a flood of feature stories and early reviews begin pointing viewers to this weekend’s broadcast, the network announced an in-season licensing deal with Amazon that gives exclusive streaming rights to its Prime Video subscribers.

Episodes of the Civil War drama, set in an a makeshift Alexandria, Va., hospital, will be released for on-demand screenings by Prime members seven days after airing on PBS.

“The partnership will help raise awareness and visibility for Mercy Street — ultimately bringing new viewers to your stations — and providing resources if we choose to move forward with additional seasons,” wrote Beth Hoppe, PBS chief programing executive, in an email yesterday to station managers.

As part of its blitz, PBS launched a digital premiere of the first episode yesterday, three days ahead of the broadcast premiere. PBS expects the online release to “build buzz and drive even more interest in the series and your stations,” Hoppe wrote in the email.

The video stream is available on multiple platforms, including PBS.org, PBS apps for Apple’s iOS and Android, FireTV, ROKU, Apple TV, Android TV, Xbox 360 and Windows 10, as well as through partners Amazon, iTunes, GooglePlay and Vudu.

PBS would dearly love to plant a flag for original American drama among its signature programs. A consistent presence for the genre has long been beyond public television’s means, unlike the imported British co-productions that dominate its Sunday-night schedule.

Hoppe said the evolving economics of the television business helped PBS finance the show. “There are more opportunities, more potential partners,” she said, noting that top Hollywood talent is flocking to television and the number of outlets is growing.

Mercy Street launches just as Downton Abbey, PBS’s highest rated show ever, is rolling out its finale season on Masterpiece.

In an interview earlier this month, Hoppe was emphatic that Mercy Street is a very different beast from Downton, which has bolstered public TV’s viewership and underwriting revenues during six seasons on Masterpiece.

Mercy Street “is not the next Downton,” Hoppe warned. “It’s not a frothy show. … The only thing the shows have in common is that they’re both dramas.”

She said PBS will need to air “at least two episodes” of the series before deciding whether to renew it.

“It’s really exciting. It’s been over 10 years since PBS has been able to launch a homegrown American drama.”

“There’s the financial consideration and the consideration of the value to the system, and you decide if the equation adds up,” she said.

Educational resources tied to the show help to burnish that value to stations and classroom teachers. PBS Learning Media and PBS Digital Studios produced short videos on Civil War topics — such as news media in wartime, Confederate iconography and medical innovations, according to a press release. The Good Stuff, a PBS-D series, is presenting a special series of Civil War-inspired episodes that will be distributed on YouTube and PBS Learning Media.

The stakes are high for Mercy Street. If the series hits its mark, the result could be transformative — stirring a new wave of American drama on PBS. Its last homegrown shows delivered their last installments in 2004: a limited series adapted from Tony Hillerman’s detective novels by producers of Mystery!, and Gregory Nava’s episodic drama, American Family.

Hoppe, who has expanded PBS’s British drama lineup as she revamped the primetime schedule in four years as chief programmer, would like to go after U.S.-based shows more actively.

“Here we are in this golden age of drama” and PBS has a lot to bring to the table, she said. The network is known for “being really true to history” and has developed somewhat of a franchise in the Civil War era documented by Ken Burns. Mercy Street, she said, “seems like the perfect fit.”

“It’s really exciting. It’s been over 10 years since PBS has been able to launch a homegrown American drama,” Hoppe said.

To finance full production of Mercy Street, PBS secured funding from the Anne Ray Charitable Trust, the Alfred P. Sloan Foundation, tourism agencies in Virginia and a partnership with Electric Entertainment, which acquired international rights. “We managed to pull all the pieces together and make it work financially,” Hoppe said, referring to the show’s first season.

She wouldn’t discuss the total budget, but noted that producers “accomplished a lot with what they had. … The price tags on some dramas out there are $10 million an hour, and this is a fraction of that.”

The cast worked for well below their regular rates, according to a source close to the production who requested anonymity because representatives of the actors don’t want their pay rates discussed publicly.

“We had also written all six scripts before we started production” she added. That means “you can prep everything at once, like a movie. It’s a way to be efficient and not uncommon for miniseries but more unusual in a true episodic series.”

PBS is hoping that some of the younger viewers it covets might follow the stars of How I Met Your Mother and The Carrie Diaries to public television, and that American men will gravitate to a Civil War story.

But the show’s focus on medical practices of the era may be a barrier for PBS’s core audience.

“It’s a little gritty,” said Craig Cornwell, senior director of programming at KET in Lexington. “The surgery scenes are hard to watch.”

Cornwell said he likes the plot lines, the cast and the fact that much of the series is based on memoirs of real doctors and nurses. The fact that Mercy Street is an American story is important to him. “I’m really glad PBS is going in this direction,” he said.

She supports Hoppe’s goal to reclaim a space for America drama on the PBS schedule. “It’s so important to our culture.”

So far, reviews from TV critics point to shortcomings.

As the Washington Post’s Hank Stuever summarized, Mercy Street hits all the requisite touchpoints but lacks heart. The show “mainly serves as a reminder that PBS’s best (also only) scripted shows are imports, which suits its deeply Anglophilic viewers just fine,” Stuever wrote.

The AV Club described the series as a “by-the-numbers prestige drama”; the Boston Globe’s Matthew Gilbert described the characters as “one-dimensional” and predicted that the series “probably isn’t going to solidify anyone’s relationship with PBS going forward.”

In evaluating whether to continue to show after one season, PBS will look beyond the immediate reactions from viewers and critics. A renewal decision, according to PBS’s Hoppe, “is less about ratings than a sense that the stations love it and want more of it, and see it as a good educational tool, not just entertainment.”