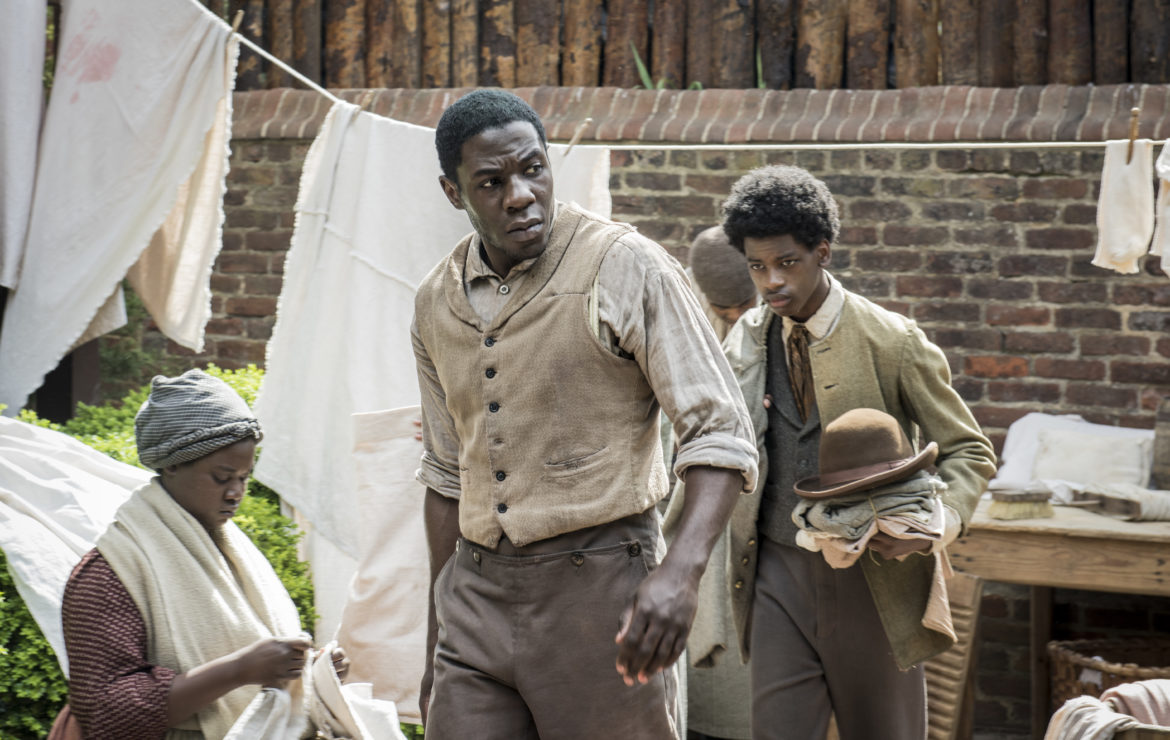 McKinley Belcher III plays Samuel Diggs, a laborer who must keep his education and talent for medicine under wraps on Mercy Street.

Though PBS just canceled Mercy Street, the broadcaster’s head programmer sees the foray into historical drama as a success.

The Civil War series revolved around the lives of the staff and patients inside an Alexandria, Va., hotel that had been converted to a makeshift hospital by Union troops. PBS announced March 9 that it would not produce a third season.

“We created a really compelling American drama, and that was what we set out to achieve,” Chief Programmer Beth Hoppe said. “Mercy Street was able to bring history alive for people who might not watch a documentary but who enjoy drama.”

But the costs of producing original drama have been prohibitive for PBS, and in announcing the cancellation PBS said that it couldn’t secure funding for a Season 3. A major underwriter, the Alfred P. Sloane Foundation, had dropped its support after Season 1. Other funders included the Anne Ray Charitable Trust, tourism agencies in Virginia and Electric Entertainment, which acquired international rights. Mercy Street also brought in cash from an in-season licensing deal with Amazon that gave exclusive streaming rights to Prime Video subscribers one week after broadcast.

The six episodes of Season 1 ultimately reached 14 million viewers, a viewership that ranked the show PBS’s second–most-popular drama after the megahit Downton Abbey that season, according to PBS and Nielsen.

Audiences that large appeal to corporate sponsors, Hoppe said, “but we didn’t attract the level of underwriting — or international sales — that we’d hoped for.” 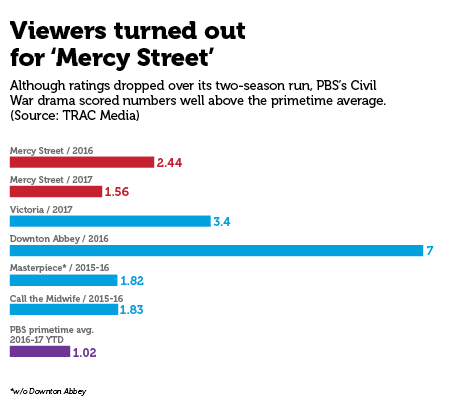 And Mercy Street’s national ratings gradually slid with each of its 12 episodes, according to public TV audience research consultancy TRAC Media Services. Still, the program ended its run well above the current PBS prime-time average of 1.02. Season 1 of the scripted drama averaged a 2.44; Season 2, a 1.56.

“Mercy Street’s audience did not meet expectations,” said Craig Reed, TRAC Media executive director. Compared with other costume dramas on PBS — Victoria and Call the Midwife — “it ranked toward the bottom in audience size,” performing on par with the less popular Mr. Selfridge and Indian Summers, Reed said.

“It isn’t that the numbers were unacceptable,” he said, “but that they did not meet the expectations set by the costs.”

PBS changed its scheduling strategy for Mercy Street’s second season, and the show’s ratings suffered without the benefit of the hit Downton Abbey as a lead-in, Hoppe said. But one upside for airing Mercy Street at 8 p.m.: “I’m happy to say that 40 percent of viewers watching Mercy Street stayed for Victoria,” this season’s Masterpiece offering, she noted.

In the end, Hoppe said, “this is not a ratings game. We saw both seasons of Mercy Street as a success.” 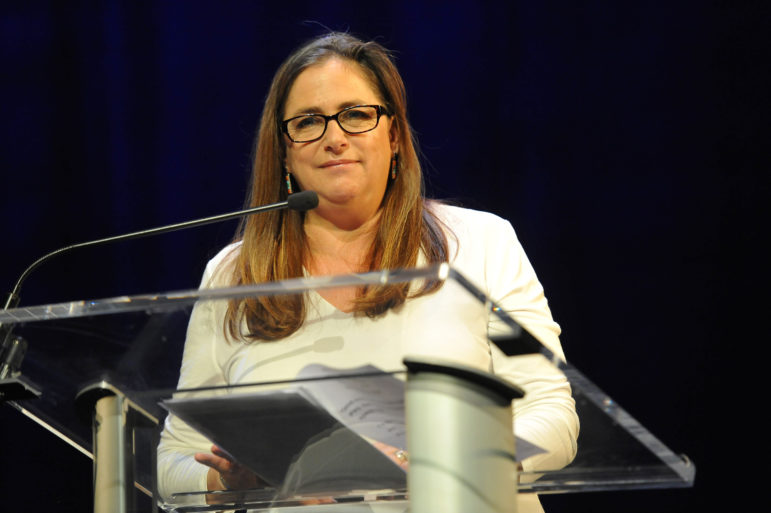 Hoppe discusses the show’s second season at at an event in New York City in November. (Photo: Stephanie Berger)

Hoppe said Season 1 “really leaned into” the hospital practices of the Civil War, when both trauma medicine and the concept of triage for serious injuries first emerged. “As we dug into the medical story, we realized a lot of other stories weren’t being told,” such as the lives of fugitive slaves of Confederate masters seeking asylum in the North. So Season 2 broadened its plotlines.

Hoppe agreed. “It’s super important to experiment,” she said. “I hope this is just the first project in a genre that we can find a way to be in.”

Becky Magura, president of WCTE in Cookeville, Tenn., heard positive comments from viewers about Mercy Street during its run. She added that she’s “very proud that PBS offered this American drama, and proud of what it was able to accomplish in two seasons.”

For Mercy Street, “the ratings were solid and consistent each week” said Mary Gardner, OPB director of television programming. She recalled speaking with one older viewer “who loved the series because of its historical value, and when I told her it would not be back she was very disappointed.” Offering viewers an American drama “was a plus,” Gardner said.

While Mercy Street found fans amongst its regular viewers, it never caught on at pledge time, a relatively new expectation as PBS and stations experiment with fundraising around core programs.

Inside Mercy Street, a behind-the-scenes special from producer Bob Marty, generated $48,764 for 82 public TV stations in March 2016. In the June drive, that fell to $1,275 for seven stations. In December, three stations aired it but made no money, according to PBS pledge reports.

PBS produced a Mercy Street finale pledge event for Season 2. An early drive report this month said it generated $49,845 for 110 stations so far. One public TV membership director, who requested anonymity because PBS has asked stations not to discuss pledge information publicly, said that many stations rated the program a 1 out of 5 based on its performance.

“Dramas don’t typically make good pledge programs,” Hoppe said. “Downton was the rare exception there.” She said Mercy Street’s pledge performance was not a factor in its demise.

“The fact that we were able to pull off Mercy Street has opened a door,” Hoppe said. “I’ve had several interesting calls from folks in Hollywood” pitching various projects, she said. “They’re saying, ‘We’re thinking of you because you did something different.’”

Hoppe’s team is currently eyeing other American dramas as well. One is Alta California, set in the late 1800s, about an arranged marriage between two families, one Mexican-Californian and the other European American.

Hoppe cited “a couple other projects in various stages of R&D” but declined to provide details. She said one is based in the 1600s and another in the 1900s.

“The idea is to explore American histories through great dramatic storytelling,” Hoppe said. “I’m hopeful there will be an announcement in the not-too-distant future.”

For Hoppe, Mercy Street “was a passion project of mine.” She was heartened at a flurry of fans using the Twitter hashtag #SaveMercyStreet after PBS’s announcement.

Could a groundswell of viewer enthusiasm bring the show back?

“If that fan demand ended up generating the revenue to make that happen,” Hoppe said, “I’d be the most excited person in the bunch.”

22 thoughts on “PBS ‘opened a door’ to other projects with ‘Mercy Street,’ chief programmer says”