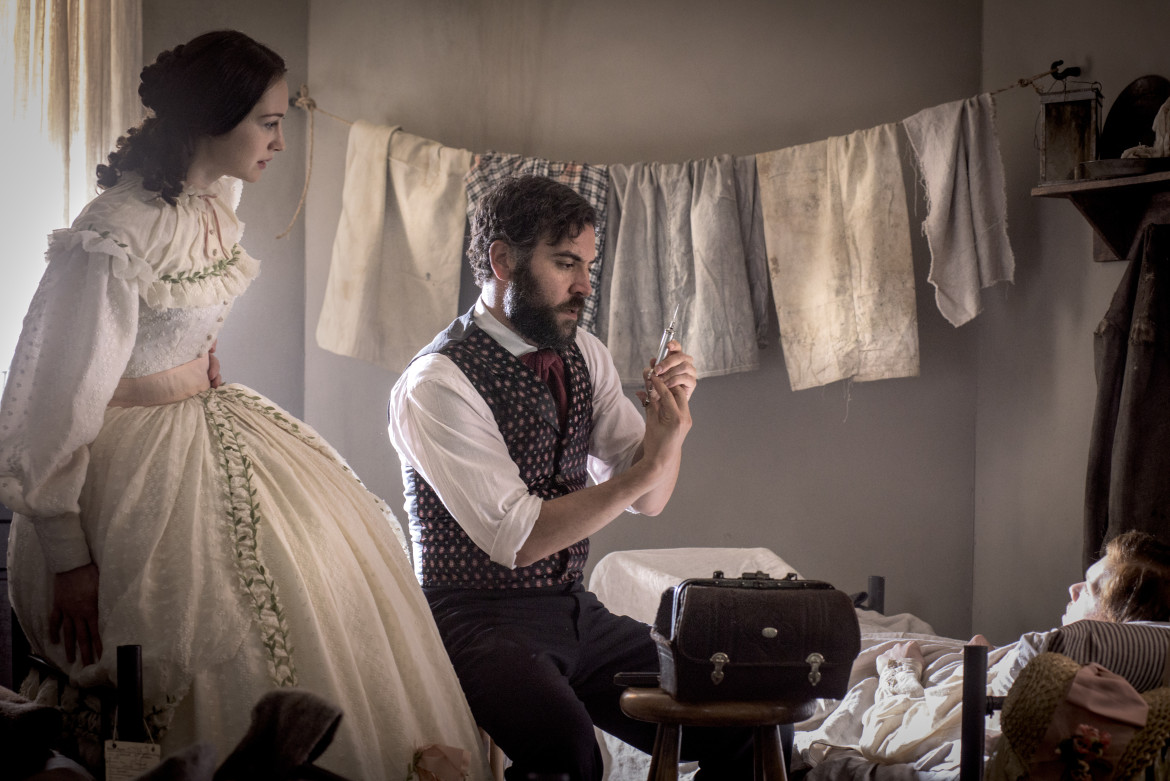 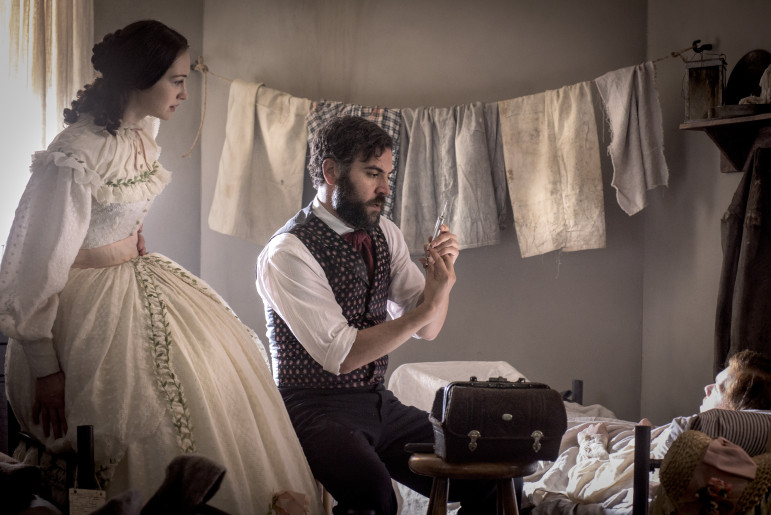 Of the approximately 375 scripted series on TV this season, it’s unlikely that any come close to the demanding standards of historical authenticity found in Mercy Street.

The six-episode Civil War drama, which debuts on PBS Jan. 17, is the first episodic American drama to be greenlit by PBS since Gregory Nava’s American Family, which concluded its two-season run in 2004.

A cross between the North and South miniseries and ER, Mercy Street revolves around life in a posh hotel that was converted into a hospital by occupying Union forces in Alexandria, Va.

For the sake of accuracy, producers consulted Civil War specialists, especially medical historians with expertise on treatments provided to wounded soldiers. Other advisors weighed in on period details, such as costumes, accessories and men’s hairstyles.

David Zabel, co-creator and e.p., said he appreciated PBS’s emphasis on precise historical details. “It’s nice to not have . . . notes that tell you to take it to a more overblown place, but instead say, ‘Keep it real. Keep it truthful. Tell the story and tell the history,’” said Zabel, a former showrunner on ER. “That’s something that PBS was more diligent about than other networks might be.”

The attention to detail is partly a reflection of the project’s roots. Co-creator Lisa Wolfinger conceived of it as a docudrama on medical practices during the Civil War. She had taken a similar approach with Desperate Crossing: The Untold Story of the Mayflower, a three-hour series she produced and directed for the History Channel in 2006. 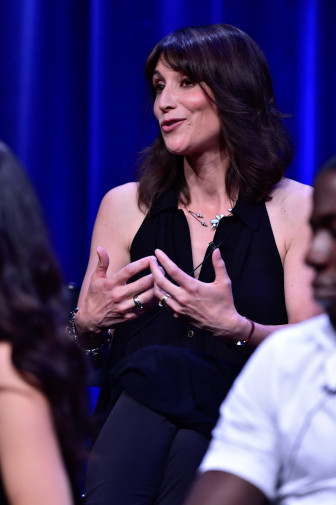 Wolfinger, co-creator of Mercy Street, originally conceived the show as a docudrama on medical practices during the Civil War. (Photo: Rahoul Ghose/PBS)

A mutual friend introduced Wolfinger to Zabel, thinking his experience on ER made him the perfect advisor on dramatizing the subject. Together, they pitched the idea to Beth Hoppe, chief programmer at PBS.

Instead of going for the docudrama treatment, Hoppe suggested that it be transformed into a dramatic series, Zabel said. “They wanted to make an American drama of the same caliber as Downton Abbey, Call the Midwife and Sherlock,” he said.

Much of the action in Mercy Street occurs in Mansion House, the former grand hotel owned by the Green family. Unlike many Civil War–era residents of Alexandria, hotelier James Green, played by Gary Cole, chooses not to flee before the advance of Union soldiers. However, he isn’t about to swear allegiance to the occupiers.

One of his daughters, Emma (played by Hannah James in her first major acting role) volunteers as a nurse. She works alongside trained nurse Mary Phinney (Mary Elizabeth Winstead), a widow from New England. They assist three doctors: Jedediah Foster (Josh Radnor of How I Met Your Mother), a contract civilian surgeon and a Southerner from a privileged background; Byron Hale (Norbert Leo Butz of Bloodline), an old-school army surgeon; and Alfred Summers (Peter Gerety of The Wire), the barely competent chief surgeon who rose through the ranks.

Also in the mix are Samuel Diggs (McKinley Belcher III), a black laborer whose previous work exposed him to medical knowledge; and Aurelia Johnson (Shalita Grant of NCIS: New Orleans), a laundress with a secret buried in her past.

“I was in love with this period and setting it in Alexandria in 1862,” Zabel said. “It was the great crossroads of the war. You’ve got the North coming into a Southern town and occupying it. Union soldiers, Southern denizens of a city, a black slave who comes for freedom, freed black people coming here for the war cause. As a storyteller, it got me really excited.”

Most of the characters were based on real people from the time. Few were notable historical figures, but Mercy Street includes scenes with actors portraying Dorothea Dix, a crusader for the indigent insane who became superintendent of army nurses; and Frank Stringfellow, a notorious Confederate spy. Though unseen, there’s also a reference to a visiting Abraham Lincoln.

Cast members were given a huge binder of resource materials, including books and films about the period, said AnnaSophia Robb, who plays the Green’s younger daughter, Alice. Some cast members pored over episodes of Ken Burns’s Civil War miniseries.

Winstead studied the actual memoirs written by the character she portrays. “I was shooting this at the same time I was discovering things about her,” she said.

Should the series be renewed, Zabel said, he plans to work in appearances by Florence Nightingale, whom the Union Army asked for advice on organizing field medicine; and poet Walt Whitman, who put his literary career aside temporarily to volunteer as a nurse in army hospitals.

Filming on location in Richmond and Petersburg, Va., gave Mercy Street a sense of place. So meticulous was the design of Mansion House, with its period furnishings, Winstead said, “that I really felt like I was experiencing what Mary was experiencing when she first came to this hospital.”

Among those who lent their expertise to Mercy Street are Dr. Stanley Burns, medical historian and advisor to The Knick, a period hospital drama on Cinemax; Shauna Devine and Jane Schultz, authors of books on Civil War medicine; and George Wunderlich, former director of the National Museum of Civil War Medicine.

Other elements of the production involved close attention to historical details. Costume designer Amy Andrews Harrell found on eBay a bolt of floral fabric from the 1860s that hadn’t faded after more than a century; she used it to make an overskirt and built a dress around it. Anya Jabour, author of a book about young women in the antebellum South, weighed in on gloves, hats and coats worn in the production.

A dialect coach helped actors find the appropriate accent, be it the clipped New England speech of nurse Mary Phinney or the mashup of Southern drawl and Britishisms spoken by Emma Green.

Hairstyles were scrutinized, as well. “We were all told vehemently not to touch our hair,” said Butz, who played an Army surgeon. “Men wore their hair longer, but there was tremendous variety. For three or four days before shooting, we all were in the makeup and hair trailer for hours.”

As Winstead prepared for a scene in which her character reads a letter that isn’t seen on the screen, she approached the props master to ask if she could write it out so that she would be able to react to it as an actor. “I went to the props master and said, ‘Would you mind if I wrote out a letter so that, as an actor, I could be reading something and reacting to it?’ And he said, ‘I’ve already written it out for you,’” Winstead recalled. “And it was the most beautiful, authentic piece of writing. It made me cry just reading it.”

At other times, the authenticity elicited feelings of revulsion. Winstead recalled recoiling from the realism of an amputation scene early in the series. “It was so incredibly ugly and painful,” she said. “It was quite easy to perform the scene because my character was supposed to be repulsed.”

With the production set up to be so true to the period, the actors were able to lose themselves in the drama. “The beard helps,” Radnor said. “And the tie and the vest and the bloody extras everywhere. You didn’t have to do a lot of closing your eyes and imagining. You just opened your eyes and you were there.”

Overall, cast members said, their experiences during the three-month shoot left them hoping for more.

“I don’t think I expected to fall in love with it to the extent that I did,” Winstead said, echoing sentiments expressed by Radnor and other cast members of Mercy Street. “We all went into it feeling that this is a really cool job. . . . I think we all came away from it feeling we learned so much and we had grown so much and that we had done something special.”