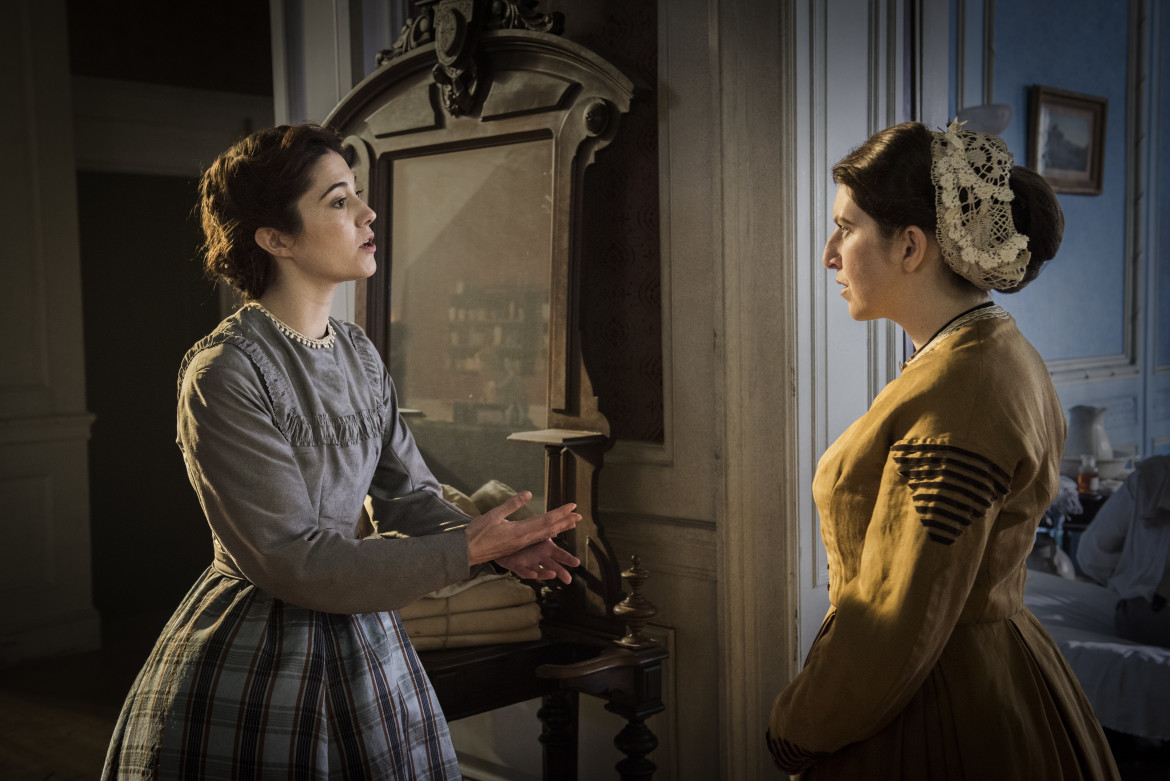 The first two episodes of PBS’s Mercy Street drew audiences of at least 3 million viewers, delivering a strong performance that boosted the odds that the network’s first American drama in more than a decade would be picked up for a second season.

The series’ Jan. 17 debut, which aired at 10 p.m. after Downton Abbey, drew 3.3 million viewers, according to official Nielsen data that PBS commissioned for the premiere. A projection of viewership for the second installment, provided by PBS Research through a spokesperson, estimated a 9 percent drop in audience, but 3 million people tuned in. Ratings for the premiere reflect official fast Nielsen data that won’t be available for subsequent episodes until 10 days after they air.

By comparison, the Jan. 3 Masterpiece premiere of Downton attracted an average audience of 9.9 million viewers for a 6.2 household rating, according to Nielsen Live+Same Day Fast National data.

Andy Edmunds, director of the Virginia Film Office, which worked closely with PBS on the series, said his understanding is that the network will decide by mid-February, and perhaps earlier, whether it will renew Mercy Street. The Civil War drama, set in a Union hospital, is filmed on location in Alexandria, Va.

“All indications are that they will be coming back for a Season Two. We are prepping for that,” he said. “We are actively looking for locations and other things that would plug into a second season.”

The network has yet to decide on renewal, according to Carrie Johnson, spokesperson. PBS chief programming executive Beth Hoppe told Current in an interview last month that she won’t decide whether to renew until at least two episodes air.

Stations are cautiously optimistic about the show’s prospects. Bill Young, v.p. of television programming at KERA in Dallas, said he’s “very hopeful that there will be a second season. Obviously, cost factors into it, but it certainly is … worth consideration based on the first two weeks’ [ratings].”

The fast national ratings for Mercy Street’s debut episode were 37 percent higher than the national season-to-date rating for Sundays at 10 p.m. and 67 percent higher than PBS’s 1.32 national primetime average, according to Johnson. Nielsen data for subsequent episodes will require 10 days to deliver and will include so-called “Live + 7” ratings, which measure two live broadcasts — the Sunday-night debuts and their repeats on Thursday in many markets — plus a week of DVR viewing. Live + 7 is fast becoming the TV industry norm for gauging a show’s success in an on-demand world, especially for shows in competitive timeslots like Sunday nights.

According to figures provided by PBS, the first episode was streamed about a half a million times from Jan. 14–24. That includes the early digital premiere, which had 200,000 streams Jan. 14–17, and the first week of regular streaming, which brought in 300,000 streams from Jan. 18–24.

KERA’s Young said Mercy Street’s initial showing across platforms is quite encouraging, especially since the show “is an unknown quantity.”

Mercy Street’s debut ratings were only slightly below those measured for Downton Abbey’s premiere six years ago, according to PBS. The British drama took three seasons to become the most-watched show ever on public television. Of course, Downton didn’t have the luxury of its own strong lead-in on Sunday nights.

KERA’s Mercy Street ratings held steady from episode one to two, Young said. About half of the station’s Downton Abbey viewers stuck around for Mercy Street.

“If every show was half of Downton Abbey, I’d take it,” he said.

Craig Cornwell, senior director of programming for KET in Lexington, Ky., noted a small dip in Mercy Street ratings from week to week, and a drop from Downton’s 4.1 rating to a 1.2 for the American-made drama. (Each ratings point represents a percentage of estimated TV-watching households.)

“Mercy Street did okay,” he said. “It did retain some of the [Downton] audience. What I am most encouraged by is the response from viewers [via phone and email]. I am really hoping this grabs an audience.”

In San Francisco, Mercy Street retained about a third of the Downton audience for KQED, said Michael Lupetin, v.p. of marketing and brand. The shows had ratings of 8.6 (Downton) and 3.1 (Mercy Street’s premiere) Jan. 17, followed by an 8.9 and a 3.0 Jan. 24.

“I am thrilled that we finally have an American series instead of everything British,” Lupetin said. “I would love it if this really took off for us.”

PBS is keen to plant a flag for original American drama among its signature programs. A consistent presence for the genre has long been beyond public television’s means, unlike the imported British co-productions that dominate its Sunday-night schedule. The network wants to offer viewers something new to chew on as Downton Abbey marches inexorably towards the end of its sixth and final season.

PBS’s publicity machine gave Mercy Street a big rollout. As a paid media campaign, a flood of feature stories and early reviews started pointing viewers to the Jan. 17 premiere, the network unveiled an in-season licensing deal with Amazon granting its Prime Video subscribers exclusive streaming rights to the show. In an email to station managers, PBS’s Hoppe said the agreement provides “resources if we choose to move forward with additional seasons.”

Reviews from television writers have been mixed. But Mercy Street has garnered consistent praise for its dramatic setting and the crucial issues it explores, such as slavery, medical history and the role of women. Critics have also loved Mary Elizabeth Winstead’s (Smashed, Abraham Lincoln: Vampire Hunter) star turn as head nurse Mary Phinney.

Hoppe has said that Mercy Street’s educational potential was a big factor in the network’s decision to greenlight the show.

“Here we are in this golden age of drama” and PBS has a lot to bring to the table, she said. The network is known for “being really true to history” and has developed a franchise in the Civil War era documented by Ken Burns. Mercy Street, she said, “seems like the perfect fit.”

“I think you have to give PBS some credit for not just making an American Downton Abbey,” Slate culture critic June Thomas said on Current’s podcast The Pub. “It does have a little bit of a larger purpose.” She and others criticized the show for a lack of nuance, heavy-handed humor and overabundant plotlines.

But some loved it. Nina Terrero of Entertainment Weekly called it a “rich depiction of the dramatic social and cultural shifts taking place across antebellum America.”

The biggest fan of the show may be the state of Virginia, where Mercy Street’s first season will have an economic impact of $27 million on the local economy, according to Edmunds of the Virginia Film Office. That estimate is based on the $11.7 million the show’s producers are spending in the state, which gains value as it cycles through the economy, and $1.5 million in ultimate ad value from promotions pre- and post-show.

As part of the Film Office’s arrangement with PBS, the network produced and broadcast a promo for Virginia Tourism at the beginning and end of each show with an estimated value of $300,000, Edmunds said. The website VisitAlexandria.com saw a tripling in visits in the first hour Mercy Street was on air, he said.

PBS was able to finance the full production of Season One with funding from the Anne Ray Charitable Trust and the Alfred P. Sloan Foundation, along with Virginia tourism agencies. It also sold the international rights to Electric Entertainment, which screened the show at MIPCOM last fall but hasn’t announced any overseas distribution deals yet.

“I don’t see how they could stop it after six episodes,” said Edmunds. “There’s a lot more war.”