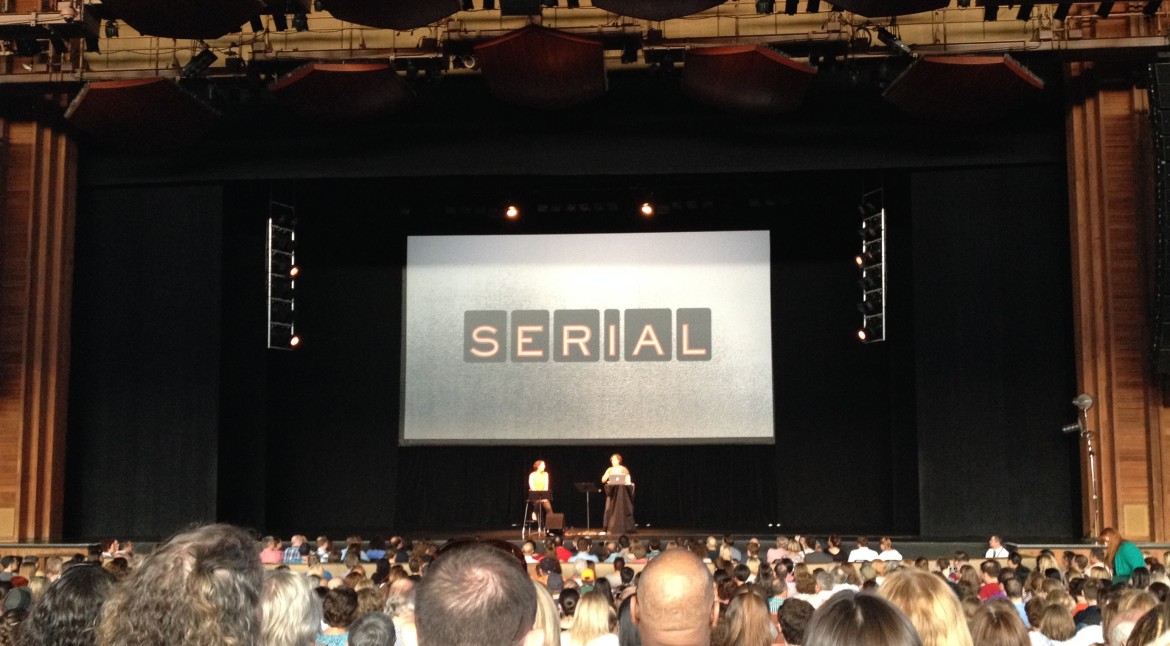 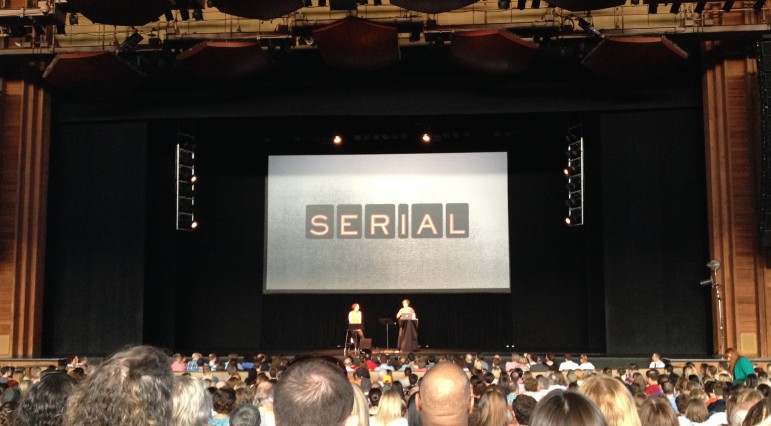 VIENNA, Va. — With Serial in between seasons and the subject of upcoming episodes still under wraps, fans might be forgiven for wondering what exactly they’d see at a series of live events now on the road.

Public radio programs including A Prairie Home Companion, Radiolab, and Snap Judgment all stage live shows, but theirs usually consist of live broadcasts or tapings for later airing. Serial, on the other hand, fed the last episode of its first season in December, and Season Two has yet to debut.

Wolf Trap, an amphitheater with a capacity of 7,000 in suburban Washington D.C., hosted the most recent show Saturday night. But even Wolf Trap’s press team was in the dark about what the audience would see half an hour before the show was to start. “It’s a bit of an unusual booking for us,” said Emily Smalling, Wolf Trap’s public relations coordinator.

“We thought we’d give it a try because I know there are a lot of people who are obsessed with Serial,” she said.

Roughly 3,000 people showed up, according to the venue, to give Koenig and Snyder, co-creators of the most popular podcast of all time, the benefit of the doubt — even with ticket prices from $25–$45.

Snyder started the evening by admitting that she and Koenig “messed up” their entrance onto the stage by being out of sync with the accompanying music and video. For a show that was already light on production — featuring just audio, a video screen, and the two radio producers sitting on stools behind music stands — some fans must have second-guessed how they were spending their Saturday evening.

But that kind of transparency, which helped make Serial so appealing, made the night more than just back-patting the popular podcast and brought out insights that both casual fans and at least one working journalist in the audience could appreciate.

But of greater interest were behind-the-scenes details not already divulged on the already-transparent podcast. Before Serial, for example, Koenig and Snyder wanted to create a show titled This Week, which would feature only stories that transpired during the previous week. A few segments aired on This American Life. But when the idea was pitched at a TAL staff retreat, their colleagues “hated it,” Snyder said.

“We didn’t take the hint at all,” Koenig added.

Later, host Ira Glass asked Koenig whether she had any other ideas. She pitched him on the story that eventually became Serial and was working on it within a week of that conversation.

A lot of time and work often goes into “saving a weak idea,” Snyder said. “A good idea can be easy and honest.”

That’s not to say that producing Serial was easy. The podcast started in Koenig’s basement. “We’d have to stop recording when Sarah’s kids flushed the toilet,” Snyder said.

The police files from the case alone totaled around 2,000 pages of documents, and Koenig spent a year reporting before the first episode aired. She continued reporting through the last episode.

Koenig also feared that Adnan Syed, whose did-he-or-didn’t-he story was the core of Serial, would stop talking to her. She acknowledged that at times they flirted during their 42 hours of recorded calls, as was evident in an unaired clip of them talking about getting gray hair. “You have cool gray hair,” Syed told Koenig.

But they were both trying to manipulate each other, Koenig said. Syed wanted Koenig to believe his innocence, and Koenig wanted Syed to keep talking.

Beyond just producing the podcast, Serial’s team encountered challenges in how fans received it. Listeners who took to Reddit with wild speculations about Syed’s case “filled us with anxiety,” Koenig said. “Those people debate . . . every single goddamn thing,” she added.

Throughout the evening, Koenig and Snyder faced the challenge of engaging an audience on a stage and in a large venue usually commanded by musical acts. But the teasing chemistry between Koenig and Snyder made it work. The two disagreed about a Saturday Night Live sketch about Serial, which “partly hurt my heart,” Koenig said.

But Snyder found it “really funny.” Koenig’s “not the audience for it,” Snyder added.

They joked about Koenig being like a grandma when promoting the show to press. “Sarah kept describing it as a really good audiobook,” Snyder said. “We were all like, ‘Please don’t say the audiobook thing.’”

Instead, they wanted to market and produce it like a good television series, with “Previously on…” recaps and cliffhanger endings. That prompted the producers to question whether the podcast’s evolution into entertainment was “okay,” Snyder said.

“To that, I would say yes, as long as you’re sticking to the truth,” she said.

Koenig and Snyder wouldn’t divulge the subjects of the show’s upcoming seasons. And unlike the podcast, the live event had no cliffhanger. “I think we’re done,” Snyder said after a final question from the audience, leaving many unanswered, and the two walked offstage.