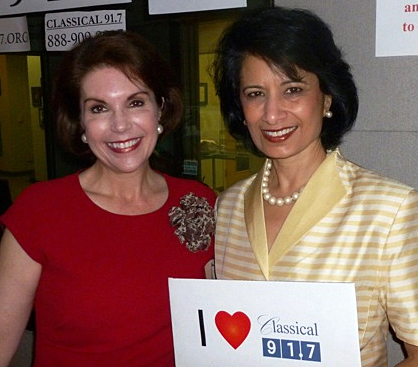 Shumante, pictured at left with University of Houston Chancellor Renu Kantor. "It's a great time to tell the story about public media being efficient and being a leader," she says.

The city of Houston, Texas, sprawls over almost 700 square miles in a state that already has an “everything’s bigger” reputation. But as its biggest public TV and radio stations are striving to better reflect the city’s troubles and triumphs, they’re not ballooning outward. Instead, they’re streamlining and slimming down.

Add the city’s Houston Public Media to the list of pubcasters that are converging radio, TV and online production to increase local programming, attract more financial support and prepare for the demands of an increasingly digital future. For decades the staffs of HPM’s TV station, HoustonPBS, and its radio stations, KUHF and recent addition Classical 91.7, have kept their businesses separate. But under the leadership of a new executive director and at the urging of the University of Houston, which owns the stations, the wall between the two is coming down.

“Radio and TV have started communicating,” says Debra Fraser, director of operations and stations manager, who has worked at KUHF since 1988 and now oversees both TV and radio. “I’ve been here 25 years, and we’ve just never worked together. It was just the culture, and somehow you let it just keep getting bigger and bigger until that’s how it’s supposed to be.”

The transformation puts HPM on the same track as pubcasters such as San Francisco’s KQED, San Diego’s KPBS and Cleveland’s ideastream, all of which have advised Houston’s pubcasters on their new path. If the convergence goes as planned, the new HPM will emerge as a more vital community institution and be seen by Houston residents as a more integral part of city life.

“The growth and, to a certain extent, the survival of the stations in the future really depends on defining them as a service and an asset to the city of Houston,” says Ed Hugetz, who as the University of Houston’s associate v.p. for planning oversaw the re-envisioning of HPM.

University and HPM leaders also hope that retooling the station will draw more support from listeners, viewers and foundations. In a city of Houston’s wealth, there’s certainly room for growth. According to 2008 Internal Revenue Service data analyzed by the Chronicle of Philanthropy, Houston ranked seventh among U.S. cities in charitable donations made by residents, with $3.1 billion given that year.

“The good thing about the change, in addition to the efficiencies on the management side, is that we now have a great story to tell investors at every turn,” says Lisa Trapani Shumate, a veteran of commercial TV stations in Houston who took over leadership of HPM in November 2011. “It’s a great time to tell the story about public media being efficient and being a leader.”

Public broadcasting has a long history in Houston — in fact, HoustonPBS was the country’s first educational TV station. But despite this track record, Houston didn’t have a full-time public radio news station until 2011, when the university acquired student station KTRU from Rice University and turned it into Classical 91.7. The acquisition freed KUHF to go all-news.

The radio expansion came as the University of Houston was considering the future of its public stations. In 2008, a new chancellor, Renu Khator, made a priority of guiding the school toward Tier One status — that is, to become one of the top research-focused universities in the country.

The mandate trickled down to KUHF and HoustonPBS, which had come up for a comprehensive review in 2009. The stations’ community advisory board had also expressed an interest in assessing their future. A task force made up of university and station staff and CAB members embarked on the review.

Converging TV and radio soon emerged as a key element of the plan. Community advisory board members suggested reinventing the separate stations under the umbrella of Houston Public Media. (Though this name is now in use, the stations are still branded to the public as separate entities.) The task force took note of the trend under way among other pubcasters across the country that opted to merge their TV and radio operations.

“As we went through this systematically . . . what emerged was that programming for the community would need to be considered first, and then the delivery mode considered second,” says UH’s Hugetz.

The task force endorsed the convergence plan, but the job of implementing it went to a new executive director and g.m. who would be hired to oversee the transition. The university laid off the g.m.’s in charge of the separate TV and radio stations — John Hesse and John Proffitt, respectively — and hired Shumate to head the fused-together operation. Shumate had previously directed programming and marketing for KHOU, the local CBS affiliate; she also had on-air and production experience from her years at the city’s ABC affiliate.

Shumante, at left with University of Houston Chancellor Renu Kantor. “It’s a great time to tell the story about public media being efficient and being a leader,” she says.

Though Shumate is still relatively new to pubcasting, she makes a strong case for the station’s bigger place in Houston’s civic life with the polish and conviction of a true evangelist.

“You can talk about the number of viewers or listeners or the dollars raised, but what I want to hear is, ‘I love Houston Public Media,’” she says during an interview with Current at HPM’s studios on the university’s campus. “That’s how I’ll know that we’re where we need to be.”

The university also promoted Fraser, who had been serving as station manager of the radio stations. Under the direction of Shumate and Fraser, the station began its move to a more integrated production model.

For guidance, HPM’s leaders turned to San Diego’s KPBS, which has gained recognition throughout the system for merging radio and television news production. HPM staffers paid a two-day visit to KPBS’s studios to learn about the station’s transformation.

They weren’t the first to do so. Interest from other pubcasters in KPBS’s converged model has prompted the San Diego station to start offering a boot camp about the process. Station leaders who visit KPBS often ask first about the tools and technology needed to merge TV, radio and online production, says Deanna Mackey, station manager.

“The conversation in these meetings tends to start with, ‘How do we get an individual to be a multimedia journalist?’” Mackey says, but that’s not where the process of reconfiguring a station starts. “It begins with, ‘Where’s your culture?’”

The culture in Houston had a way to go. Radio and TV staffs worked in the same building, but on separate floors and rarely together. Administrative functions were also divided. But under the new plan, those silos were to come down.

KPBS’s TV and radio divisions were less divided than HPM’s when the station embarked on convergence, Mackey says. Though HPM may have further to go, the buy-in from its leaders demonstrated an essential level of commitment. “That’s 80 percent of the challenge,” she says. “Are you ready for the change, ready to embrace it?”

HPM’s Shumate also came in with a mandate to get spending under control at the broadcaster, particularly on the TV side of operations, which had been running a deficit. The university had been covering shortfalls without the benefit of any state support for broadcasting because Texas law bars pubcasters from receiving state funds. As a result, HPM shed about 20 full-time TV positions, mostly in production.

HPM is now gearing up to launch a weekday radio show that will lay the groundwork for producing content for multiple platforms. The approach is similar to KPBS’s, which started getting more mileage out of interviews for use in both radio and TV features.

HPM enlisted programming consultant Jim Russell to help plan the multimedia production, slated to launch next spring. Russell met with staff for several days, advising them to focus on the radio production first. Because radio is cheaper and simpler to produce, “if you can figure out radio and make the editorial process work, you can spin off or evolve the rest,” he says.

Russell led the staff in an exercise in which they defined Houston and its needs and aspirations. Some said they felt that although the city is the nation’s fourth-largest, people take it less seriously than other major cities.

“Houstonians feel they are underdogs,” Russell says. “They are often not respected by others in the country. It’s viewed as a place of tumbleweeds and cowboy hats. Instead, it’s a place with hidden treasures.”

HPM will soon hire staff for the multimedia production. In June, it hired its first Public Insight Network reporter, who will also be a key contributor to the new show.

“That says it all right there,” Fraser says. “That’s the direction we’re trying to move in. . . . We want to make Houston Public Media more conversational, more interactive and more about the community.”

The stronger commitment to local programming is part of HPM’s plan to become more critical to the Houston community, says Ed Hugetz. “Our viability to survive long-term depends on having an integrated story to go to Houston’s philanthropies and say, ‘This is what we’re offering,’” he says. “We’re leading with the strength of our content.”