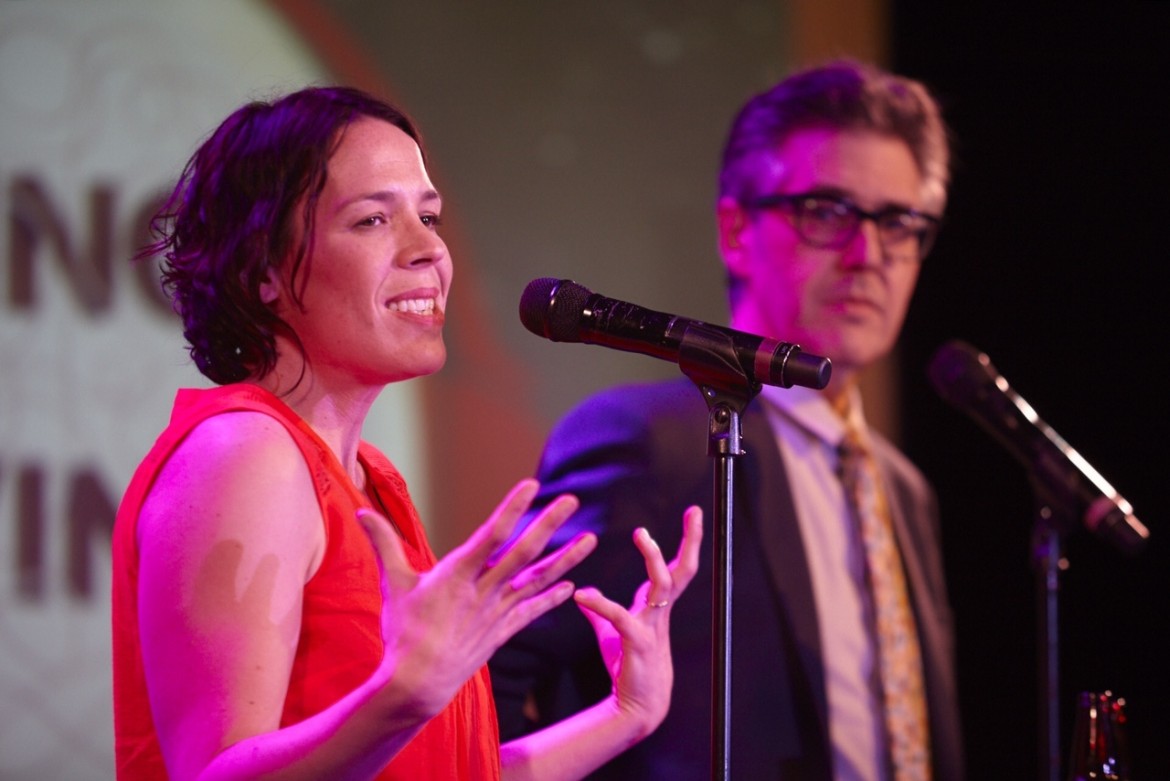 NEW YORK — Big stars of public radio’s podcasting world took the stage of a cabaret nightclub in New York City Wednesday to do what they’re best at — telling stories. But this time the topic was the power of their evolving medium to connect with listeners, and the audience was advertisers.

It was the first podcasting upfront put on by NPR, WNYC and WBEZ, producers of some of public radio’s biggest podcasts. Hundreds of ad agency representatives and podcasting fans mixed with hosts and producers of 26 podcasts in the crowd around a small, dark stage at (Le) Poisson Rouge. And it was clear that the hosts brought their experiences pitching for money during pledge drives or Kickstarter campaigns to their moments in the spotlight.

“The success of Serial is because we’re really good at what we do,” Julie Snyder, senior producer of This American Life and co-creator of Serial, told the cheering audience. “We’ve been putting out This American Life for 20 years and it’s consistently one of the most popular programs on public radio. We know our shit.” 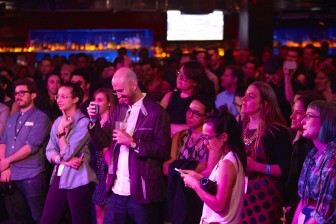 Jad Abumrad, of Radiolab, and Glynn Washington, of Snap Judgment, hosted the presentation portion of the event, which also featured live music. Ira Glass of This American Life and Guy Raz of NPR also took the stage to make pitches, introducing audio clips from podcasts like Invisibilia, TED Radio Hour and Serial.

The podcasting upfront had a decidedly different vibe from the flashy events mounted to sell network TV ads, according to Peter Weingard, v.p. and chief marketing officer at New York’s WNYC.

“This feels like public radio, up close and intimate, more of a community,” he said.

“Time will tell if this translates into more underwriting,” Weingard said. “This is our first step out.”

Scott Rosenberg, v.p. of business development, content and services at Roku, said the presentation “hit all the right notes . . . sell, but not oversell.”

“They stayed true to their ethos,” he said.

During a press conference before the upfront, National Public Media’s Bryan Moffett set expectations for a soft sell to advertisers. “The upfront is partly a celebration of podcasting,” he said. “It’s not your traditional upfront. We’re not going to go out there and reveal grand plans. We’re trying to tell the story of podcasting and kind of show the power of the medium.”

Public radio’s recent podcast successes — such as the 7 million listeners who downloaded every episode of Serial last year and Snap Judgment’s crowdfunder that raised $200,000 for a new season — built buzz and a new base of listener support. But podcasting’s big “moment,” as it was referred to ad nauseam throughout the night, hasn’t resolved its challenges.

“For a long time podcasting has been one of those things that people kept expecting to get big . . . and it never got big,” said Glass, host and creator of This American Life, when he took the stage. “It was like world music or something.”

Snyder recalled her worries about the medium’s prospects as she was working on Serial. She told her family she was starting a new show, but it wasn’t a radio show.

At a cousin’s wedding last summer she talked about starting the podcast, and no one understood what it was. “At a certain point, . . . everyone’s handing me their phones and I’m trying to show them, ‘This is how you download an app.’”

Eventually, she reassured them, “Don’t worry about it, you don’t have to listen.”

Of course, Serial’s popularity put podcasting on a new trajectory. Technology changes, such as Apple making its podcasting app native to its iPhone 6 operating system, also helped, as Glass pointed out. And now public radio’s big producers had attracted a room full of advertisers and marketers looking to get in on the game.

Geary Yonker, who works in national sponsorship sales at Chicago’s WBEZ, said he sees a shift in the sponsorship climate for podcasts. “Now you have people calling us,” he told Current.

Mark DiCristina, director of marketing for MailChimp, knows the benefits of advertising on public radio podcasts first-hand. The email marketing service hit it big with an ad run on Serial that turned its brand name into a meme. It has already committed to ads on the podcast’s second season, he said.

The girl heard mispronouncing MailChimp’s name in the ad was a 14-year-old from Norway who had been waiting in line for an iPhone 6 when she was recorded. Because of the meme, the brand got mentions on major television shows like Saturday Night Live and The Colbert Report. The ads brought “a tremendous amount of awareness” to the brand, he said.

Public radio podcasts are especially valuable for advertisers because their emphasis on telling good stories really connects with listeners, DiChristina said. “We’re not looking to buy [ads on] every podcast . . . we’re interested in good stories.”

“It’s a very intimate medium that the audience generally trusts,” he said. “That trust is transferred to the advertiser.”

But podcasters pitching during the upfront event tried to convince media buyers that Serial wasn’t a one-off advertising hit.

“Listening to podcasts, it’s not a passive experience,” Snyder told the crowd. “It’s not like the radio a lot of times where you turn on your car, the radio comes on, you listen to what’s on. With podcasts you’re choosing. You have to choose every time what show you want to listen to.”

A nationally representative survey by Edison Research on the preferences and behaviors of public radio podcast listeners supported Glass’s pitch points. The stations that hosted the upfront event commissioned the research and shared highlights.

“The exciting news was we could do [a nationally representative survey] because the size of the audience was significant enough that it was not only a feasible survey, it was a very successful survey,” Tom Webster, v.p. of strategy and marketing at Edison Research, told the audience.

Though the upfront was a celebration of podcasting, the new medium must overcome shortcomings if it is to take off with advertisers, according to pubradio executives who briefed reporters before the event. Foremost among these is audience metrics.

“There is no comScore [for podcasts],” Gina Garrubbo, president of National Public Media. “We have to create that standard for tracking and reporting for the industry.”

Sarah van Mosel, underwriting v.p. at WNYC, hopes to tackle the issue of podcasting metrics through a working group she’s forming within the Interactive Advertising Bureau. A white paper to be released later this summer will “define some of the things that agencies need so that they can make those media buys happen a little faster, have a little bit of a universal language that we’re all using,” she said.

Still, “they keep coming back, the advertisers,” she said. “Because it works.”