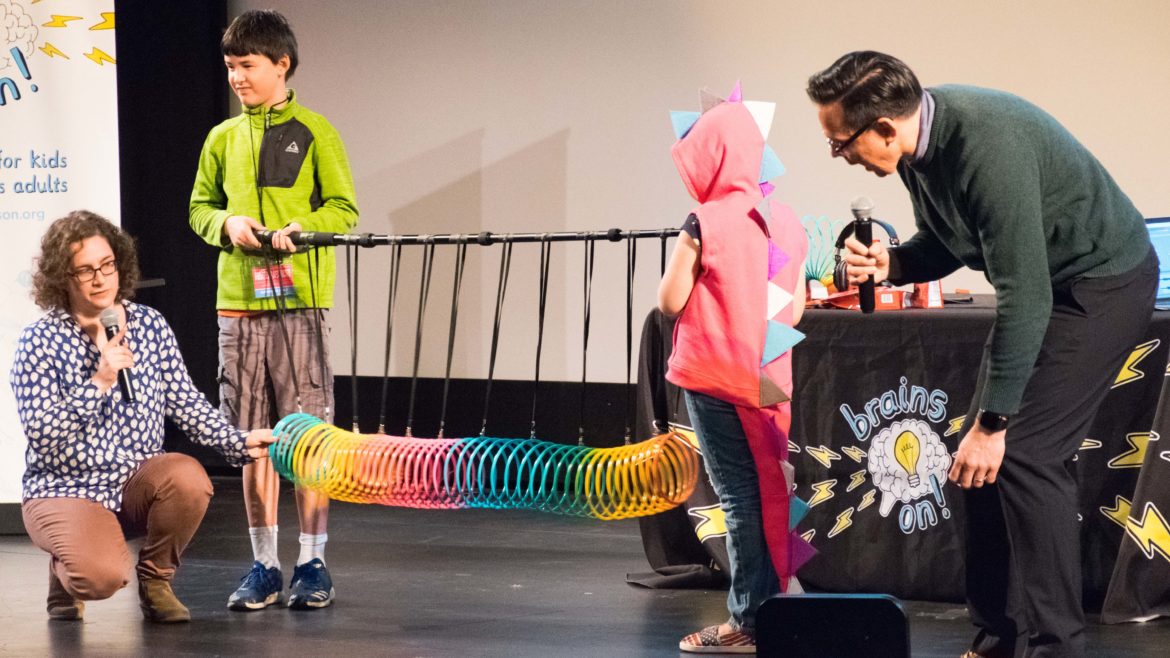 "Brains On!" host Molly Thomas, left, and producer Marc Sanchez enlist kids to help with a demonstration on stage.

Families have an insatiable hunger for entertaining and educational events. Show up to any popular story time or children’s music show, and you’ll find a highly engaged crowd of kids and their deeply appreciative parents.

Now, as more families discover kids’ podcasts, the audience eager to connect with podcasters in person is growing. Producers of these shows are working hard to catch up with the popularity and strategies of their grownup counterparts.

It’s a logical next step for a podcast genre that has gained significant attention and momentum over the past year. Podcasts for adults have sold-out shows, made festival appearances, and booked multi-city tours for years. Recently, The Wall Street Journal went so far to declare podcasts as “the new rock stars of the touring circuit.”

If the success of the first-ever kids’ podcast festival is any indication, kids’ podcasts are poised to make their own leap on stage.

The most superlative podcast festival for kids

This spring, The Mega Awesome Super Huge Wicked Fun Podcast Playdate brought five shows and over 400 kids and parents together for the first time.  The two-day event was the brainchild of Amy Macdonald, director of community engagement at WBUR in Boston.

“I immediately thought, I can do this,” Macdonald said. “I can handle a children’s podcast festival.”

Macdonald assembled a lineup of mostly public media podcasts: Two of the most popular — NPR’s Wow in the World and Gimlet Media’s Story Pirates — along with Brains On! from American Public Media, But Why (Vermont Public Radio), Eleanor Amplified (WHYY in Philadelphia) and Circle Round.  The festival was April 28—29 at the 450-seat Coolidge Theater in Brookline, Mass. Tickets were sold for individual shows ($10), Saturday or Sunday ($20), or the full festival ($40). Shows for Story Pirates and Wow in the World sold out, and the others came close.

“I think a lot of adult podcasts can get away with more talking and tape on stage, because adults can sit still and listen.” — Sanden Totten, “Brains On!”

The festival featured a diverse set of performances. Circle Round presented two stories with live music, Wow in the World featured Brooklyn band The Pop Ups and Eleanor Amplified put on a radio play. Others were built on audience participation. Brains On! invited kids to make sounds and do demonstrations; But Why taught bird calls; and, Story Pirates made up a story on the spot based on suggestions from kids.

After the shows, kids lined up in the lobby, eager for photos and autographs. “It was so surreal to be mobbed by eight-year-olds,” said Sanden Totten, one of the producers of Brains On! “They come up to you, they know your show, they tell you their favorite episodes, and they have you sign their T-shirts and take pictures with you.”

“The children were almost shaking in their shoes when they got to meet the voices they hear when they’re going to bed every night,” said Macdonald. “It’s like going to a concert or a rock show. Kids want to meet the people behind the voices.”

From studio to stage

There’s no set formula for kids’ podcast live shows yet, and that’s part of the magic — for both audiences and podcasters. “It is low stakes, in a way,” said Lee Overtree, co-founder and co-host of Story Pirates. “You can try stuff and make people partners in your experiment.” 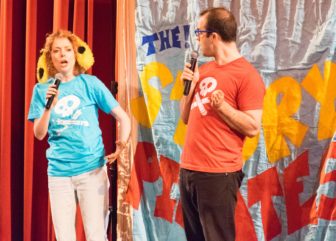 “Story Pirates” Joanna Simmons, left, and Nick Kanellis made up a story on stage during their festival performance.

Producers of Story Pirates are the seasoned pros among the podcast set. The audio show grew out of a children’s theater company that adapts stories written by kids. Now, they’re working to find the right balance for a podcast live show — meeting expectations for highly produced audio while keeping an audience entertained in real time.

“Are you trying to serve your fans, first and foremost, or are you trying to create good content?” said Overtree. He considers the choice between focusing on the people in the room, or the audience listening at home. “I think a lot of people’s first instinct is, ‘We’re making content, we’re just going to make that content live.’ But I’m not sure that always is the smartest way to do it.”

Story Pirates has tried it both ways. They recently recorded a Los Angeles show featuring comedian Patton Oswalt, which was “a heavy lift” in terms of both live and post-production, Overtree said.  “There are so many moving parts between actors, music, sound effects and all the problems of recording live sound,” he said. The Podcast Playdate show was not recorded for an episode.

By contrast, the podcast Book Club for Kids, which began as a radio program on KPCC in Pasadena, Calif., leans heavily on live shows for content. Host Kitty Felde arranges kids’ panel discussions at book festivals, schools and even at the National Archives. “The energy from the crowd adds a special zing to the taping,” Felde wrote in an email.

Either way, there is a big difference between producing a live show for a kids’ podcast, versus adults. Totten, from Brains On!, sums it up this way: “I think a lot of adult podcasts can get away with more talking and tape on stage, because adults can sit still and listen.”

Macdonald described the shows at WBUR’s festival as having three things in common: Interactivity, variety, and timing. Each show involved the kids, whether they were shouting out suggestions from their seats or coming up on stage for demos. Activities were timed out to keep the audience focused. The performances were jam packed. They all clocked in at a tight 45 minutes, so each day’s event ended before the theater’s midday matinees.

The Podcast Playdate made $6,000 in revenue for WBUR, some of which will be used to put on next year’s event. Macdonald plans on bringing in sponsors and partnering with children’s publishers to include authors. Meanwhile, podcasters are continuing to develop their live show strategies. 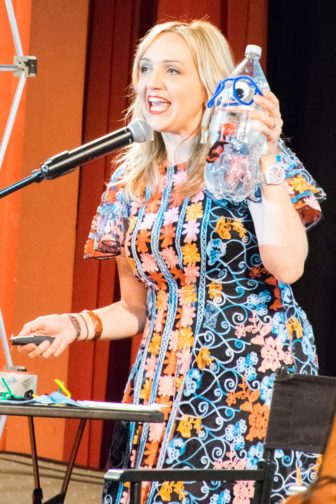 NPR’s Wow in the World is making tentative plans for a tour. “We’re still in the ‘tinkering’ stage, exploring a range of different options to take this show live on the road,” co-host Mindy Thomas wrote in an email. She’s done six different types of live appearances, including discussions with scientists and meet-and-greets. After hosting the “Wow in the World Pop Up Party” at the Podcast Playdate, Thomas wrote, “Building on that concept as a companion to the podcast is definitely something we’re playing with.”

Brains On! is planning six more live shows in 2018, seeing them as a chance to build the show’s brand. “You can really be a brand across many platforms,” said Totten. “Maybe the live shows end up taking off more than the podcast, or lead to a video idea. Some of it is seeing where else brands like this can fit.”

Other shows have experimented with bringing podcasts into schools. For example, Podikins, a Canadian storytelling and activity podcast, created an interactive mystery show for a third-grade classroom. Libraries, bookstores and other venues with children’s programming could provide an alternate route for podcast appearances, outside of theaters. The variety of spaces could create multiple models for successful live event strategies. That means there’s a lot of room for experimentation, within a podcast genre with plenty of space to grow.

Even though podcasts build their reputations on the intimacy of the audio medium, the benefit of translating that experience to the stage is clear. As Story Pirates’ Overtree put it: “When people are in the same room with you, when they see that you’re real people, when they can shake your hand and when you can look them in the eye, it deepens the interest and the engagement with your fan base in a way that just listening just can’t do on its own.”

Lindsay Patterson is the creator, producer and co-host of Tumble, a science podcast for kids. She is also a co-founder of Kids Listen, a grassroots organization of advocates for high-quality audio content for children.