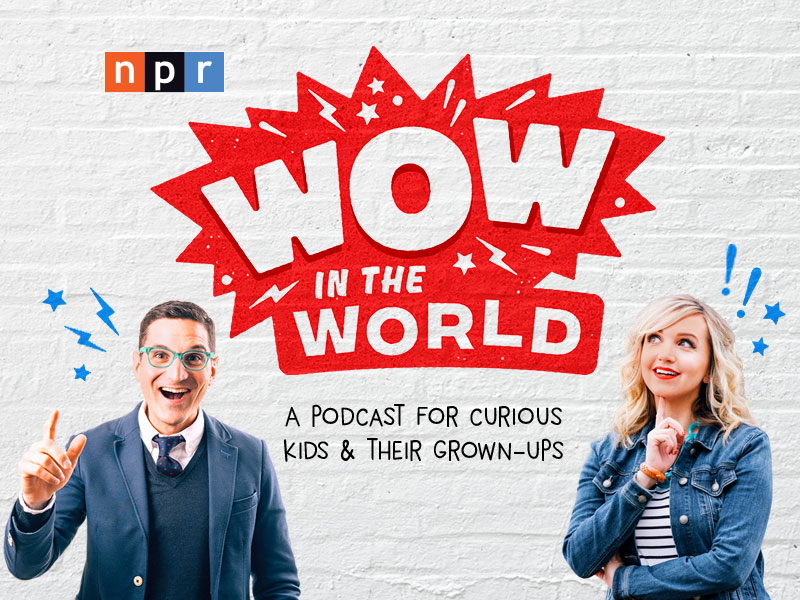 NPR fans didn’t know that they had waited 47 years for children’s programming until a few weeks ago.

Wow in the World, a podcast hosted and developed by veteran hosts Guy Raz (NPR’s TED Radio Hour and How I Built This) and Mindy Thomas (SiriusXM’s Absolutely Mindy), is the first show that NPR has ever produced for kids. When it appeared on Apple Podcasts a week before launch, Wow in the World rocketed to the top of the charts. Its rise was driven, most likely, by public radio–loving parents anxious for something their kids could listen to. So why did it take NPR so long to make a show for kids?

“Honestly, NPR has always been curious about kids programming,” Anya Grundmann, VP for programming and audience development, told me. “But we haven’t had quite the right venue.”

Radio has a strong history of family-oriented programming, predating the arrival of Saturday morning cartoons. But from its founding, NPR focused on news, ideas and culture – not kids’ stuff. While PBS has built its reputation on kids programming over decades, NPR maintained an unwavering focus on adults. Kids were the invisible audience in the backseat, without access to the radio dial. They grew up on Car Talk, whether they liked it or not.

A few NPR member stations made an effort to cater to kids — most notably, WNYC with Kids America in the late ’80s — but sustained support and distribution was tough to come by.

That’s what makes Wow in the World remarkable. When NPR has put its stamp on content targeted at young ears, it means it’s time to take podcasts for kids seriously.

“We’re seeing the podcast space as a place for us to explore new ways we can do storytelling,” said Grundmann.

Podcasts might be the ideal audio format for kids. Kids Listen, a grassroots advocacy organization that promotes high-quality podcasts for kids, has found that kids are highly engaged podcast listeners. (Full disclosure: I co-founded Kids Listen, and Thomas is a member.)

In a survey of families with kids who listen to podcasts, 80 percent of respondents said that their kids listen to an episode more than once. Nearly 20 percent listen to an episode ten or more times. What’s more, kids engage deeply with the content — they want to discuss the show afterwards, ask questions and tell others what they’ve learned. Kids drive a large part of listening, as well. Respondents reported that 40 percent of the time, it’s the child who requested to play a podcast.

But it’s not the kids that drove NPR into kids’ podcasts. It was the parents.

“When we look at our core podcast audience, we believe it is in the mid- to late ’30s. We believe many of them are also parents,” Grundmann said. By offering a podcast for kids, she said, “we can super-serve the audience that’s loving podcasts.”

In other words, NPR doesn’t see itself as venturing too far outside its comfort zone — though Grundmann adds, “We hope it will expand the audience.”

NPR’s previous experiment with podcasts for kids came from an unlikely place. Last year, NPR digital designers Libby Bawcombe and Kaytee Nesmith created two episodes of a show called Raydiddy, aimed at ages 4–8. Raydiddy turned out to be a proof of concept rather than a podcast, but it asked an important question: What does an NPR podcast for kids sound like?

It’s clear that Guy Raz and Mindy Thomas have an answer. Wow in the World is focused on science and technology, although Raz and Thomas are quick to point out that it’s not a science show. “It’s more about discovery and wonder,” said Raz.

The wonder factor is cranked up to 11. As hosts, Raz and Thomas bounce off each other like energetic electrons. The show covers a lot of ground. In the first episode, they discuss astronomy, seaweed and pandas. Thomas provides the interstitial stories and interviews with kids. (My favorite line: “From now on, grandmas always don’t live with panda bears. The end!”)

It’s silly but has a sense of humor that can appeal to parents. The sound design gives the impression of being on an auditory roller coaster ride. The idea is that families will strap in and forget that they’re not looking at a screen.

Wow in the World is Raz and Thomas’ second collaboration. The first was Breakfast Blast, a weekly segment on Absolutely Mindy, Thomas’ daily morning show on SiriusXM Kids Place Live. Raz is a father of two and an avid Absolutely Mindy listener. He got in touch with Thomas, who was a fan of TED Radio Hour, and she asked if he’d be interested becoming a contributor. What began as new 3- to 5-minute segments grew into 20 highly produced minutes of news, music and sound effects unlike anything heard on public radio.

“It’s an antidote for screen time. It’s the joy of listening together and getting off your devices.”

When I asked Raz and Thomas why they wanted to move on to a podcast, the answer was one of access. SiriusXM is a subscription service. “We wanted to make it available to all kids, and we wanted to create something different and new — something that was a magical journey,” Raz told me. “Digital audio is the place to do it.”

Raz and Thomas developed Wow in the World independently from NPR, conscripting their kids into play dates while they worked on the show. They took lessons from Breakfast Blast. “The science stories were the ones we had the most fun with and that kids had the best reaction to,” Thomas said.

Apparently, NPR also responded well. Grundmann pointed out that Wow in the World is inherently journalistic in nature and played to the strengths of their science coverage. “That seemed like it was right on point for us,” Grudmann said.

Raz and Thomas are producing the 25-minute show on a weekly basis with the help of a freelance producer. They’re also working with children’s media executive Meredith Halpern-Razner, formerly with Sprout, on a production company called Tinkercast.

“The idea behind [Tinkercast] is simple: Help create and develop kids programs,” said Raz. “Wow in the World is our first show. There’s plans down the road to develop more. We can’t talk about it right now. But we hope we will be able to soon.”

Will NPR make more podcasts for kids if Wow in the World proves a success? Grundmann says they’re open to it and that the show’s quick rise to the top of the Apple Podcasts chart was gratifying.

“We had a lot of confidence that this was something that would be exciting to our podcast audience,” she said. “The talent involved are really creative and dynamic, and we saw there was probably room in this space to make podcasting feel more essential for parents and kids.”

“I think Guy and Mindy have it right,” Grundmann continued. “It’s an antidote for screen time. It’s the joy of listening together and getting off your devices. The magic of your imagination is triggered by audio. That’s really exciting to us. We were hoping that would be exciting to others as well.”