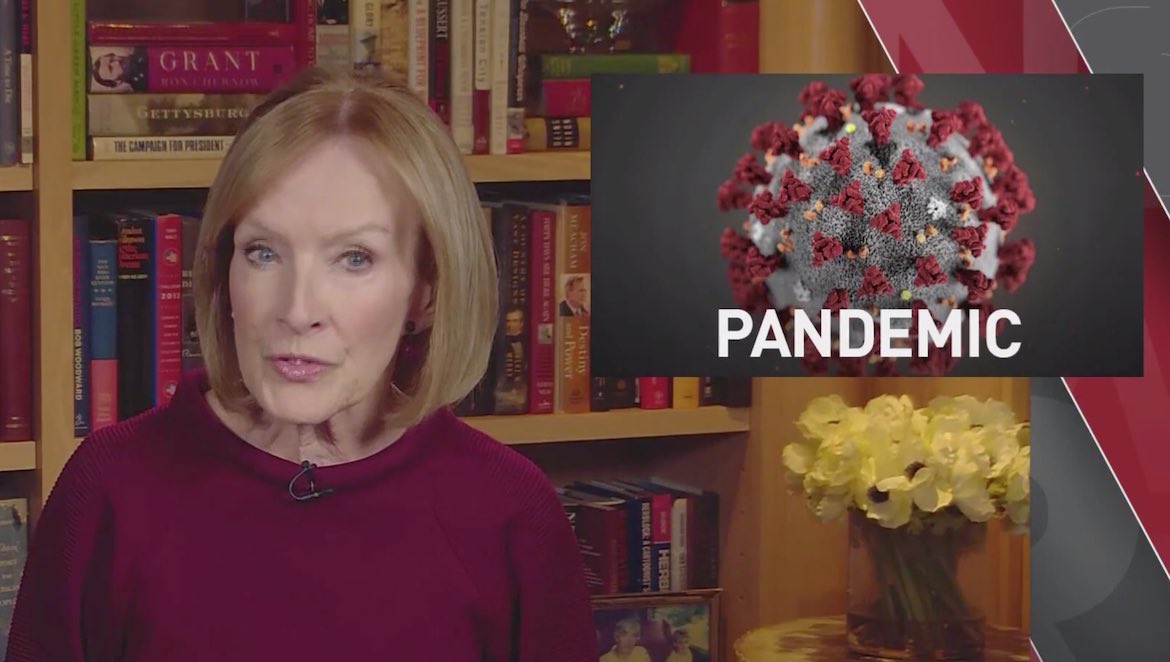 Judy Woodruff anchors the May 8 edition of “PBS NewsHour.”

The COVID-19 pandemic brought more viewing to public television, and PBS NewsHour was among the programs that kept viewers tuning in with more frequency.

Nightly news programs became increasingly essential to television viewers in February as Americans learned about community spread of COVID-19 within the United States. When the pandemic reached crisis status in the first weeks of March, COVID-19 outbreaks varied widely from state to state and town to town, making it more “local” than most national crises.

The pandemic created an exceptional set of circumstances and generated an insatiable demand for national and local news. Businesses and workplaces shut down, and Americans went into lockdown. The sheer number of viewers available to watch (measured by Nielsen in households using television) increased because more people stayed at home. They needed to know about coronavirus spread in their communities, and television stations provided daily doses of local news coverage. Studies by Nielsen and TRAC show that overall viewership for TV news began in February and continued to climb through March. By early April, local news audiences had declined to more typical levels, but NewsHour maintained its growth into May.

People seek familiar, trusted news sources in times of crisis, and that’s why PBS NewsHour gained audience during the first weeks of the lockdown. NewsHour does not compete with commercial channels on hard-news turf; it focuses on narrative exposition, news event perspective and expert observations, as in the popular Friday political segment, Shields and Brooks. We characterize the core values exemplified by NewsHour’s format as “calm discourse” in comparison with local TV news formats (“If it bleeds, it leads”).

What drove this increased and sustained viewing for NewsHour? Data suggests one reason: Casual and light NewsHour viewers watched more frequently. We believe NewsHour’s format of calm discourse was particularly attractive to older and apprehensive viewers during this time of duress, causing them to tune in more frequently. We found scant evidence suggesting new viewers were responsible for NewsHour increases.

Our analysis examined the audience growth from several different vantage points, including weekly and 90-day cume trends, audience viewing behavior and the effects of market characteristics or geography on audiences. The analysis reinforced a growing belief of many media scholars and researchers that increased frequency is the key for building audiences now and in the future.

A well-accepted frequency-building strategy for local stations is on-air promotion. In many ways, that’s what the pandemic provided for NewsHour, acting like an external tune-in campaign, bringing viewers to the program more frequently and increasing average–quarter-hour ratings 37% from the February average to the first week in April.

TRAC began by monitoring the effect of the pandemic on public TV audiences starting in February, plotting the NewsHour’s cume audience by week. Week 1 of TRAC’s analysis began Feb. 10; week 8 was the first week in April. The data in the following chart is household cumes averaged across the metered markets.

Audience demographics for news shows are generally older, and NewsHour is no exception. However, viewers from some younger households appeared in the cume, including 18–34­-year-olds. There was considerable variation in audience demographics in different markets. In Miami, Houston, New York, Philadelphia and Dallas, NewsHour audiences were much younger than in other markets.

What lifted NewsHour’s audience? The usual answer from a research perspective is that there was a larger available audience (an increased number of homes using television), and that increased impressions (people 2+ viewing). But another explanation might be that people sought out NewsHour for its diverse perspectives on this important news event, looking for more detailed scientific knowledge concerning COVID-19.

Public broadcasting, at its essence, is an assemblage of hundreds of individual stations that differ from one another in audience size and performance. Boston and Birmingham, both metered markets, differ dramatically. We plotted their NewsHour weekly cumes during the eight weeks of our analysis.

NewsHour and other public affairs programs attract smaller audiences in some geographical parts of the country than others. NewsHour viewership is generally stronger in California, the Pacific Northwest, Mountain states and the Midwest.

The NewsHour struggles to attract viewers in the Eastern time zone, both north and south, though for different reasons. Socioeconomic, educational and demographic characteristics of the people who live within a specific “geography” are more important than latitude or longitude, and these determine the culture and viewing preferences of audiences in different regions. So, with all these nuances, geography matters in television viewing patterns. It influenced the size of the NewsHour audience, as shown in the above graph. During the weeks of the pandemic lockdown, the NewsHour audience grew for many stations, despite the differences in their geographies and demographics.

March pledge weeks provided a convenient opportunity for an experiment: We could compare NewsHour’s cume performance at the same station before and after pledge.

Public TV stations that already had large cumes for NewsHour broadcasts grew even more. These stations serve markets where news and public affairs programs perform well even in normal times — Seattle, Oklahoma City and San Diego. NewsHour cumes for KCTS, OETA and KPBS increased within the range of 46% to 51%.

In some markets where NewsHour previously had smaller cumes, many more viewers tuned into the program as the pandemic intensified. These markets include Detroit; Pittsburgh; Tampa, Fla.; and Orlando, Fla. In these markets, growth in NewsHour’s cume was quite impressive, ranging from 40% to 75%. No doubt each station has a separate tale to tell about how their viewership changed, but local cultural variables influenced NewsHour audience cumes in each case.

Building a station’s cume is like filling a sports arena. In professional sports, team owners want to fill seats with as many fans as possible. Yet there are many kinds of fans: season ticketholders, fans who show up as often as possible and others who come sporadically or just once a season.

NewsHour viewers come in as many varieties as sports fans, but they all make similar decisions about whether to attend on any given night. Across the nation, hundreds of thousands of people decide to watch the NewsHour every evening. But, like sports fans, not everyone attends every game. They come and go, five days a week. When researchers ask viewers about their favorite programs, they say they watch every night or every week. But Nielsen meters tell a far different tale.

Take, for example, Austin, Texas. It’s a good NewsHour market. Austin is the state capital; it is home to a large public university and lots of people who work in high-tech jobs. For KLRU, its PBS station, news and drama genres are popular with viewers.

To return to our sports analogy, all viewers in the NewsHour cume don’t “attend” every night; they don’t even attend every week, even during a pandemic.

Like many other markets, KLRU’s NewsHour broadcasts compete with local commercial newscasts. In a given week, almost two-thirds of the viewers in the NewsHour cume also showed up in the cumes of these nightly newscasts. Local competition affects the size of NewsHour’s audience.

In Austin, the NBC affiliate is dominant, as it is in most U.S. TV markets except in the Northeast. When we looked at news cumes for five Austin stations during the last two weeks of March, NewsHour on KLRU had a weekly cume of 5. Cumes for the ABC, Fox and CBS affiliates ranged from 16 to 14. For KXAN, the NBC station, the cume was 24.

This is typical. All across America, NewsHour has a smaller cume than commercial stations’ news programs. That’s because NewsHour’s unique format and narrative tone is attractive to some people and not to others.

Like the sports fans that fill seats in a basketball arena, NewsHour viewers assemble each evening. On any day, the audience is drawn from the larger pool of viewers that are already in the cume. Audiences for all stations are composed of both heavy and light viewers. The pattern is similar for every station in the Austin market and in every market in America. Most of the viewers who assemble for nightly news programs in Austin watch only one night a week, and a similar percentage of every station’s cume watches every night.

Because public TV programs of every genre attract more light viewers than heavy viewers, TRAC uses a 90-day cume window. This allows us to capture casual viewers, a large segment of the total audience for any program.

The following table compares NewsHour weekly and 90-day cumes at markets in different regions of the country during the pandemic quarter (January to March). It also calculates the percentage of viewers in the 90-day cume that watch each week.

KPBS in San Diego has the largest 90-day cume — 20. About one in five homes in the 90-day cume (22%) tuned to the NewsHour in an average week. That ratio is similar for stations in all markets regardless of the variability in 90-day cumes. In other words, the NewsHour audience in each market behaved essentially the same— a nice redundancy.

The cumes themselves differ, due to the impact of geography. San Diego’s 20 cume is quite different from Philadelphia’s 7. The reasons why could be the subject of another analysis for a different time.

In its own way, the pandemic served as a tune-in promo for the NewsHour. The viewers’ needs for authoritative information and interpretation of COVID news from a trusted source motivated them to view more often, lifting the NewsHour’s viewing frequency above pre–COVID-19 levels. Viewers who were already in the NewsHour’s cume — as season ticket-holders or casual fans who show up sporadically — knew when and where to tune in for NewsHour’s calm discourse on the day’s events.

For on-air promotions that will continue to build frequency for NewsHour, remember that the best promotions for programs create and manage viewer expectations. When producing an on-air promo, one should never assume the obvious is known to the viewer, especially younger ones. A good promotion tells viewers about broadcast time. Better promos contain messaging about the value of the NewsHour format and how its calm discourse can improve the quality of the viewer’s civic and personal life.

Promotion that builds frequency does not have to be elaborate or expensive. The most effective promotions are created by local stations and scheduled through a strategy of shared program affinity. Promote NewsHour adjacent to other programs that its viewers watch — shows like Antiques Roadshow, Nature and Nova.

Twentieth-century scheduling practices stressed scheduling to attract large audiences (gross ratings points), but audience fragmentation over the last two decades rendered that notion archaic. In the 21st century, frequency is key to building audience. It’s a matter of getting someone who views once a quarter to view once a month and getting the casual fan who views once a month to watch once a week. Our analysis shows that the pandemic did not attract a lot of new viewers for the NewsHour. It caused light viewers to watch more often. Build frequency, and GRPs and cumes will increase naturally.

Stations have many local touch points with their audiences. Outreach activities, websites, social media and streaming platforms attract participation primarily from viewers already in the broadcast station’s cume. When a station’s touch points focus solely on internal interests (e.g., attracting more page views) they aren’t promoting the broadcast schedule to increase viewing frequency. The wise manager will develop strategies that promote both on-air broadcasts and streaming as well as social and digital services for younger audiences. It’s not an either-or proposition.