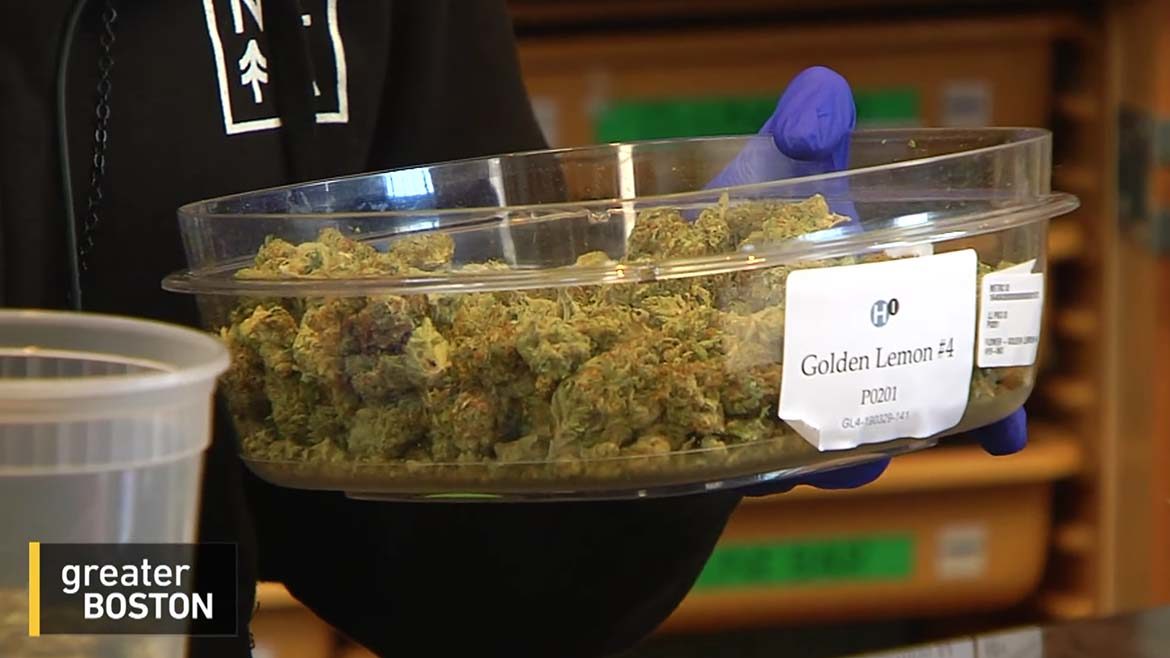 WGBH reported on regulation of marijuana retail sales for the news collaboration.

For starters, they’ve shared five news segments on marijuana legalization to be packaged for broadcast in a flexible format. All of the stories are available to PBS stations across the country.

Each segment tackles a different aspect of the complicated changes in marijuana policy that are playing out state-by-state. Stations can choose segments to insert into their own programs or package them into a half-hour show.

The collaboration sprang from a spur-of-the-moment proposal by Phil Alongi, executive director NJTV Nightly News, at the end of a two-day meeting of news executives from five big-city stations. They represented most of the public TV stations that produce news every day, and met in San Diego in March for pragmatic talks about running a news operation.

“The original point was to share ideas on everything, from how we’re staffing to what types of equipment we’re using,” Alongi said. “Has anyone found a new way to streamline workflow or improve the operation of the assignment desk? What time of day were the editorial meetings, and did beat reporters work out better than general assignment reporters?”

As the meeting wound down, Alongi made a pitch. “There’s enough of us here doing quality content,” he said, recalling the exchange. “What if we took five different aspects of a big national issue, like marijuana, with each of us doing a local take on the issue?”

The idea resonated around the table. Within an hour, they devised a flexible format to which, potentially, any PBS station could contribute.

Each news executive in the group chose an aspect of the marijuana controversy to cover:

“We just divvied it up in a way that made sense,” said Mary Field, EP of WTTW’s Chicago Tonight. “It was so fast and so casual.”

“This was really a good opportunity for us to be able to experiment and see if we could develop a half-hour show that could air in every state,” said Kate Zachry, WGBH news director.

They agreed that editorial control would be vested in the station that produced the segment. The content had to conform to that station’s editorial standards.

Stations shared their work-in-progress as the stories took shape. “We shared story directions with each other and then, before we went into production, we shared the scripts we would be doing,” Alongi said. This was done less for editorial approval than to be sure the reporting didn’t overlap, he said.

Each of the five stations agreed to air the pieces produced by the others, though they have flexibility in deciding how the coverage rolled out.

“My understanding is that everyone handled it a little differently,” Zachry said.

WTTW opted to air each story in separate episodes of Chicago Tonight, its weeknightly news show. The station also plans to combine all five segments into a full half-hour program to be broadcast this summer, Fields said.

WGBH packaged four of the five stories into Cannabis Country, a half-hour program that included a studio-based debriefing interview with correspondent Arun Rath.

The coverage could potentially reach every corner of the country. All five reports are available from Wavelength, the two-year-old free digital content-sharing platform operated by WNET in New York City, parent station of NJTV. Through Wavelength, any PBS station can download one or all of the stories.

Wavelength was itself designed to support collaborative productions that emerged from public TV’s Major Market Group Arts initiative, a program coop that launched in 2013 and allowed stations to share arts coverage; and SciTech Now, a content-sharing initiative for science and technology reporting. Both were spearheaded by WNET, which went on to develop Wavelength as a broader content exchange for PBS stations. Since launching in 2017, it has enabled stations to share local productions tied to The Vietnam War documentary series from Ken Burns and Lynn Novick, among other national program initiatives.

For the collaboration on marijuana coverage, each partner station created graphics for its local version of the show. However, Alongi is seeking funding for an anchor and generic graphics so that PBS stations with modest production capabilities would be able to package the segments into a complete program.

In the future, Wavelength could function as a bulletin board for similar public affairs collaborations, allowing stations that don’t regularly produce news stories to participate in a production.

“You don’t have to do news every night to contribute one segment on an issue,” Alongi said. ”If we put together a really strong model, next time we can do this on pre-K education, mass transit or anything we can learn from each other.”

A former producer for NBC News, Alongi said he understands that the independence of local stations, and their ability to create programs tailored to local communities, is a strength of the PBS system. But these qualities also have a downside. “That can also sometimes be a weakness because we end up in these silos,” he said. “We’re trying to break down some of these silos and benefit from the same advantages of commercial outlets which share content and information.”

He described a strong economic incentive for further developing a content-sharing model for news coverage. “We wound up producing a five-minute piece that we would have produced anyway,” Alongi said. “It not only didn’t cost more, but I got an additional 20 minutes of content free from these other stations.”

“It’s difficult to put together a half-hour special on marijuana,” Alongi said. “It would take a lot of time, resources and money. Now I’m only responsible for my one-fifth, and we have something substantive.”

Alongi said he would like to use the format to produce monthly news stories on other national issues.

Meanwhile, newsroom leaders who participated in the first production hope to get other stations involved.

“We definitely could use support to build the collaboration and strengthen it,” Field said. “Who knows what else might happen? Maybe fiber links between local news shops. The potential is huge.”