Public television stations are ramping up production of local arts and culture programming through an initiative launched last September by WNET in New York and the Major Market Group, an affinity organization for stations serving the largest television markets.

With production materials and support provided by a small team of WNET producers, the Major Market Group Arts Initiative, or MMG Arts, opened the door for New Mexico’s KNME to revive ¡Colores!, a popular arts showcase that had been dormant since 2007, and for WCNY in Syracuse, N.Y., to deepen an academic partnership with the Newhouse School of Public Communications at Syracuse University. 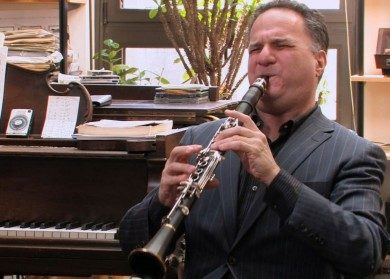 Clarinetist David Krakauer performs in a segment produced for WNET’s local arts series and shared with other pubTV stations through the MMG Arts collaborative.

KETC in St. Louis, a station that brands itself as the Nine Network, created a four-hour locally branded block of arts programming for Sunday afternoons, and WGBH in Boston is using material from MMG Arts to augment its weekly arts program, Open Studio with Jared Bowen.

MMG Arts was designed around the needs and resources of the big-city stations that belong to the affinity group, but WNET President Neal Shapiro is looking to bring stations in smaller markets on board.

So far, WSKG in Binghamton, N.Y., is the only non-MMG station participating in the production co-op. The $14,500 annual co-op fee is more than one-third of the station’s annual budget for TV program acquisitions, yet station chief Brian Sickora says MMG Arts has helped to raise the station’s profile within the Binghamton arts community while also raising the bar of quality in its local productions.

Sickora, who decided to commit to the initiative last year after learning about it during a meeting of New York state pubcasters, theorizes that arts content is well-suited for multistation collaborations. When it comes to cultural programming, he said, “there are no real geographic boundaries.”

Others see the initiative as a foundation for building more collaborations among public TV stations.

“The question always seems to be, ‘Why can’t we do something together that really breaks out of the mold?’” Shapiro told Current. “So 10 months ago we decided that we were just going to make it happen. And 10 months later, we’ve made it happen.”

More than two dozen stations receive weekly packages of arts-related content, delivered via file transfer protocol to their computer systems. The packages include video pieces from stations around the country, a lineup, script, credit roll, music and graphics package. Also included are digital templates and graphics for localized arts and culture websites. Each package arrives three weeks prior to the planned airdate.

Shapiro described NYC-Arts, WNET’s five-year-old magazine show, as the genesis for MMG Arts. “It not only does well in the ratings, but also it makes great connections for us in the arts community,” he said.

Shapiro began exploring how other stations covered arts and culture in their communities. Some didn’t — budget shortfalls had forced them to cancel local arts productions — while others were producing content in various configurations, such as monthly or weekly installments, pledge specials or single news segments.

As an experiment, WNET invited MMG stations to submit material from their own local arts programs and packaged some of the performances, interviews and features into four sample episodes.

“We wanted to do one pilot, but we had so much stuff we actually produced four,” Shapiro said. He anchored the pilot programs, which were shared among MMG stations and not intended for broadcast. 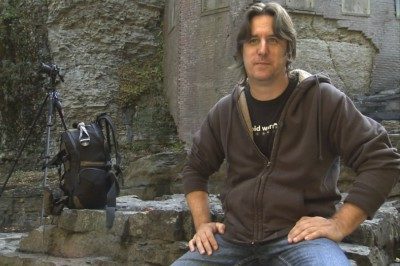 A feature segment on photographer A.D. Wheeler, who specializes in shooting ruins, was produced by WSKG and distributed nationally through the co-op.

Executives and programmers at MMG stations responded enthusiastically to WNET’s proposal to formalize the co-op and begin assembling broadcast-quality material.

As of Feb. 28, the date of the most recent data available, 23 of 28 participating MMG stations had launched or plan to launch a new arts show with content provided through MMG Arts. “The majority of stations regularly contribute content to the MMG Arts Initiative even though there is no requirement to do so,” said Johanna Baker, WNET publicist, who handles the co-op. “In some cases, it is an issue of rights and clearances, or they don’t have the resources to produce their own content.”

Sickora was enthusiastic about joining MMG Arts despite the limitations of WSKG’s $40,000 program acquisition budget. The station had already mounted a weekly arts series, Expressions, and the co-op provided the capacity to add another series, Artist Café, and focus Expressions as a showcase for local performances. After a search for a new talent to host the programs, WSKG discovered Jami Viengkham, a personable waitress with an arts-education background.

Sickora also challenged his small TV staff to produce high-quality segments that would be picked up by other stations via WNET’s weekly program package.

Of seven segments WSKG has offered for the national schedule, WNET producers have distributed three to co-op members — features on a clockmaker, a glass artist and a “decay photographer” who specializes in shooting ruined buildings.

“We were pretty jazzed when we noticed that one of our segments ran in Boston,” Sickora said.

Albuquerque’s KNME had faced similar challenges in mounting local productions after its TV staff was downsized in a series of budget cuts over the past several years. ¡Colores!, which launched in the 1990s and became a robust statewide cultural showcase, dwindled to a series of occasional specials and then went off the air around 2007, said Franz Joaquin, director of content. “[W]hen the bottom dropped out . . . there was no way to fund it,” he said.

But the show lived on in the memories of KNME viewers, who often asked when it would return to the air.

Joaquin saw the MMG Arts Initiative as a way to revive the show and to reverse a nearly decade-long trend of attrition in its TV production and programming staff. He said he had to “scrape money from four different budgets” to hire a new full-time producer for ¡Colores!

The show returned to KNME’s Friday primetime schedule in January. Its format and editorial lens have been revamped: Instead of exploring the “arts and culture of New Mexico,” Joaquin said, it now presents “arts and culture for New Mexico.” He remains “adamant” that each episode include one locally produced segment.

Most participating stations build their weekly shows around those local features.

WCNY tapped journalism-school graduate students in the Goldring Arts Journalism program in Syracuse University’s Newhouse School of Public Communications to shape its local arts coverage. The station and j-school had collaborated on earlier productions, including a documentary exploring how the sport of lacrosse originated from a game played by local Native American tribes.

To produce Artifex, the new weekly series that WCNY launched in September, producer Mark Martino works directly with students from Newhouse. “Our staff provides videography and editing, and students write the segments and appear in them,” said Jim Aroune, v.p. of radio and television. Their work is bolstered with local arts content produced by station staffers and MMG Arts segments.

Artifex runs at 10:30 a.m. Sundays, and its audience is roughly equal to that of other weekly programs, fluctuating between a 1 and 2 share, Aroune said.

Aroune is pleased with content provided by MMG and what WCNY can do with it. “Public media really hangs its hat on its ability to bring arts to the public,” he said. “We’re able to do that — not only locally through our own means but also through the contribution of students.

“That really fulfills important parts of our mission.”

A home on Sundays

Nine Network in St. Louis also chose Sundays to showcase its commitment to arts programming, carving out a four-hour block.

Arts programming “used to be scattered all over,” said Patrick Murphy, production v.p. “Now we can point to Sundays, 1 to 5.” 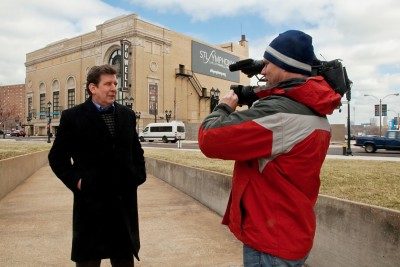 Patrick Murphy of the Nine Network/KETC tapes a lead-in for a Sunday Arts segment outside Powell Hall, home of the St. Louis Symphony.

The block blends Sunday Arts, a locally branded weekly program assembled by one staff member, with MMG Arts content from other stations, a local arts calendar and a locally produced segment. Following Sunday Arts is Living St. Louis: Best of the Arts, culled from nearly 10 years of that popular show; other arts-related content rounds out the afternoon.

The arts block “is developing a buzz on Facebook and Twitter,” Murphy said. “It’s also an incredible way to get much closer to the leaders of local arts organizations.”

One of the largest stations in the system, WGBH, is using MMG Arts content to enhance a showcase for its own arts reporting. Open Studio with Jared Bowen premiered Feb. 8 and runs Fridays at 8:30 p.m. with a Sunday repeat.

Open Studio Executive Producer Valerie Linson said she’s been “incredibly impressed” with the quality of the MMG Arts pieces. “And because for the most part they’re evergreen, everyone around the system can enjoy the content at any time,” she said.

Bowen, who also covers the arts for NPR and WGBH news programs, has heard enthusiastic feedback about the show from viewers. “People on the street really appreciate the eclectic nature of the show. We ran a profile of a photographer in upstate New York who finds beauty in ruins; that really resonated with people.”

Yes, the same segment that Sickora said WKSG was proud to contribute.

“That’s really cool,” Sickora said of Bowen’s compliment. “See, art is in the eye of the beholder, no matter what DMA your eyeballs are in.”