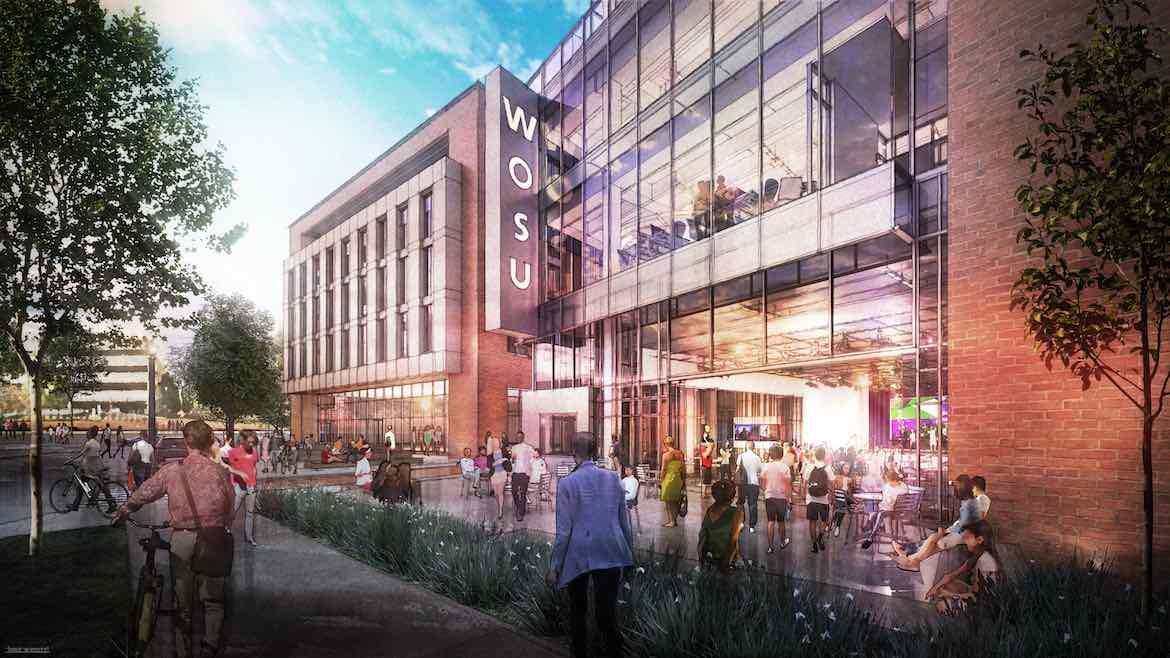 A rendering of WOSU's new headquarters.

A new era has begun for WOSU and a tumbledown neighborhood in Columbus, where Ohio State University’s campus opens to the city.

The public broadcaster’s new headquarters, under construction on the corner of 15th Avenue and High Street, is the flagship of an ambitious urban redevelopment project called 15+High. WOSU broke ground in April on the 52,000–square-foot, $29 million building, which features a five-story glass tower.

Financed with proceeds from the FCC spectrum auction, fresh cash from a capital campaign and a loan by its university license-holder, the building is scheduled to be completed by early 2021.

An abandoned sorority house and two dive bars are being flattened to make way for the pubcaster’s new home, said WOSU Public Media GM Tom Rieland. When the headquarters is completed, the dual-service public broadcaster plans to offer programs and events for students and the public well beyond what it can provide now from cramped basement digs on the far west side of campus.

The multiblock city area that’s being redeveloped for 15+High will eventually include performance venues, restaurants, retail stores, a new hotel and pedestrian walkways.

“Everybody wanted to see light because we have basically no windows,” Rieland joked. “So we probably went overboard on that.”

For the past 50 years, WOSU’s staff has worked from several wings of the basement of a large conference center remote from campus. “There’s not even a bus stop within walking distance,” Rieland said.

With no open spaces that lend themselves to collaboration, “radio, TV and digital content producers rarely run into one another,” Rieland said. “We are stacked on one another in typically small closed offices. Some of the physical space, such as the radio studios, were updated about a decade ago, but the areas are very siloed.”

He described the design of the new building as open and providing many spaces where staff can talk and collaborate across departments. “All our content folks are really looking forward to growing their capabilities as reporters and producers,” he said.

The media lab will be a place to experiment with community podcasting and 360-degree video storytelling. Community Studio will be used by all areas of WOSU to host events, broadcasts, live streams, and internal and external gatherings.

When the university opted to put the broadcast license of WPBO-TV in Portsmouth, Ohio, in the FCC’s spectrum auction, the $8.8 million earned by relinquished channel was critical to the headquarters project, Rieland said.

Ohio State set aside $7 million for construction of the new building and $800,000 towards furnishing and equipping it. The remainder of the proceeds, $1 million, was earmarked for internships and other student opportunities at WOSU.

The university also provided a $10 million long-term loan for the project. To cover the $29 million price tag, WOSU launched a $12 million capital campaign; it has raised $9.6 million so far.

The total cost of equipping and furnishing the building is estimated at $7 million, Rieland said. Most of those expenses will be covered by an equipment reserve fund that WOSU has built over the past four years.

WOSU is working on plans to expand its programming for central Ohio, Rieland said. An upgrade to WOSU’s digital news operation is under discussion, as the newsroom aims to produce more in-depth coverage of the ethnically diverse, fast-growing city of Columbus.

Discussions are also ongoing to “reforge links to the academic core of OSU” and define new academic programs that could take various forms, Rieland said. He’s talking with the School of Communication about ideas for engaging journalism students beyond internships. The College of Engineering may also partner with the station to find ways to expose electrical engineering students to broadcasting professions — and to get them to help during the transition to the new facility.

WOSU is also in talks with people involved in OSU’s new interdisciplinary moving-image production major about how to enhance its student experience by interactions with the station.

Rieland is developing closer relationships with leaders of the Wexner Center for the Arts and the School of Music, which is also being renovated. WOSU just laid out initial plans to provide fiber connectivity that would enable the music school to stream and broadcast performances by guests, faculty and students when the renovation is complete.

Engagement programs for the broader community are also on the drawing board. Rieland expects to have at least 20 new long-term partners collaborating in various capacities when the building opens.

WOSU is working with Columbus’ Center of Science and Industry, a family-friendly science museum, to have hands-on telecommunications-related exhibits throughout the new facility.

WOSU and the PAST Foundation, an educational nonprofit that works with schools to incorporate scientific research into classroom instruction, are discussing ways to extend their collaboration in the new facility. The foundation paired with WOSU to develop a new podcast series, Learning Unboxed, and is assisting the pubcaster in creating its new media lab-makers space.

The John Glenn College of Public Affairs will move its monthly speaker series, Dialogue, into the new Community Studio. WOSU has already started to co-produce the series on campus.

WOSU is also working with Gateway Film Center, located a few blocks away from its new HQ, on events showcasing independent film, including kids programming and documentary film premieres.

And the broadcaster plans to open its doors to the public for exhibits of neighborhood art, events for children, meetings, open performances and the media lab.

“We want to be seen as valued, relevant and vital to the lives of our neighbors,” Rieland said.