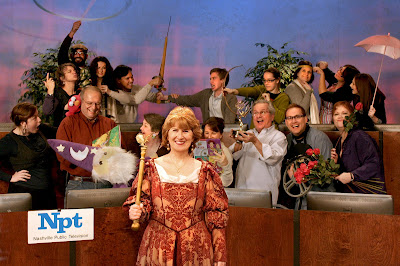 Nashville Public Television was a finalist for a local Bowtie Award for Best Workplace Environment, the Arts and Business Council of Greater Nashville announced this week. The honor recognizes “a business that integrates arts and creativity into the business culture to build morale and foster employee creativity and innovation.” The council said that NPT has “transformed its building into the NPT Arts Center — a modern day, nonprofit arts commune that houses NPT, the Nashville Shakespeare Festival, TN Rep and Nashville Film Festival. The creative collaboration greatly enhances each organization, which benefits our entire community.” Also in the building is Book’em, a nonprofit children’s literacy organization, and NATAS (the National Academy of Television Arts and Sciences) Midsouth Chapter.

Although NPT didn’t win, it sure had fun creating a photo (above) as part of the nomination process. Joe Pagetta, NPT director of media relations, brainstormed with Denice Hicks and Nicole Sibilski of the Nashville Shakespeare Festival on a picture to capture their shared workplace. They began with NPT’s recognizable pledge set and built from there. “There is someone from each of the organizations represented, holding something associated with what they do,” Pagetta told Current. And, yes, that’s NPT President Beth Curley as the queen, reigning over the creative chaos.  “I positioned everyone, Jim DeMarco from NPT lit it, and I basically just told everyone to act crazy several times,” Pagetta said. “And that’s how we got it. It was hilarious!”