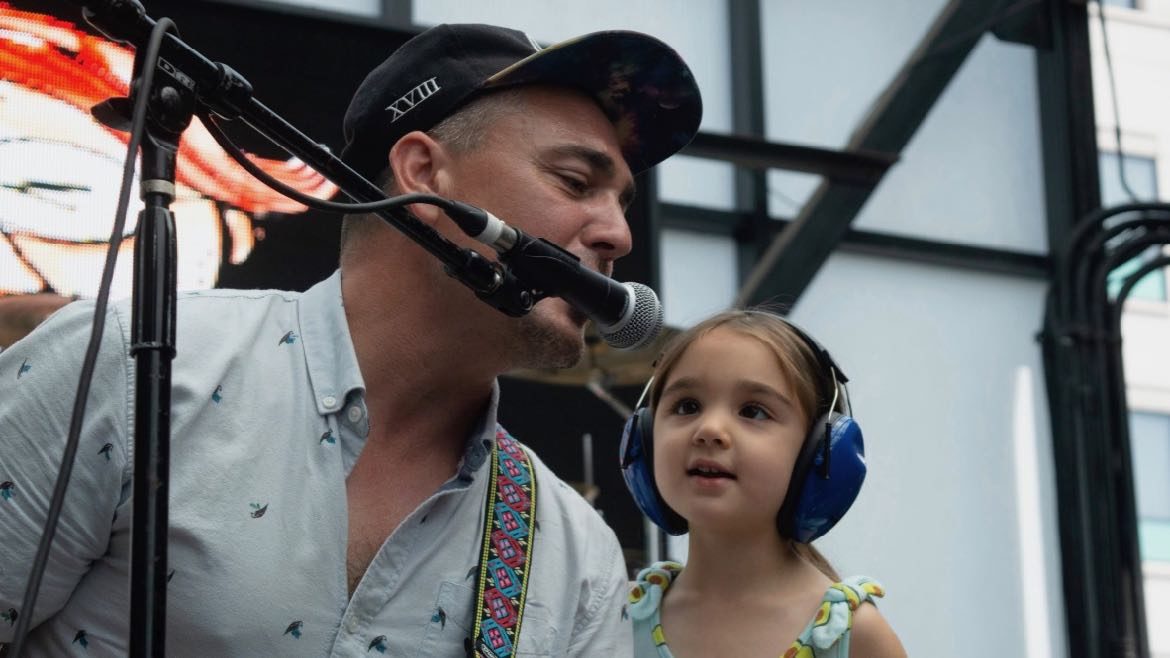 As parents Ryan and Jamie Yerdon sipped craft beers, 3-year-old Talia, wearing a pink leotard, ran in circles around them. It was 10 a.m. on a sunny Saturday in June at Power Plant Live!, an entertainment complex on Baltimore’s Inner Harbor. The Yerdons were relaxing among other music fans who had turned out for Saturday Morning Tunes, a family-friendly concert series produced by WTMD in nearby Towson, Md.

Parents in the crowd, most of whom appeared to be in their late 20s and early 30s, described themselves as Baltimore natives who had moved to the suburbs after having kids. Some were carrying infants with headphones nestled over their ears. Others enjoyed hot dogs and free Starbucks coffee as their school-aged children colored the pavement with chalk. The glass-covered music pavilion was half-full, and restaurants surrounding the stage had opened their doors and staffed their bars for the morning concert. Toddlers and infants bounced on their parents’ shoulders as Phoam, a Baltimore-based Phish tribute band, launched into “Suzy Greenberg.”

While Ryan and Jamie, of Catonsville, Md., kept a watchful eye over Talia, the couple talked with friends whose own children were blowing bubbles and dancing.

“This is a great way to let Talia experience the music in a way that’s safe for her,” Jamie said. “I feel comfortable with her stepping away from us here.” She nodded her head towards her husband with a smile. “And he’s a huge Phish fan.”

“You get to introduce your kids to what you’re into,” Ryan added cheerfully, before getting up to dance with Talia.

The June 8 concert capped the 2018–19 season for Saturday Morning Tunes, a concert series targeting families and young children. Sam Sessa, WTMD’s Baltimore music coordinator, spent the morning behind the scenes coordinating band logistics and monitoring check-in. Then he stepped onto the stage to introduce the performers.

Sessa came up with the idea for Saturday Morning Tunes and has essentially run the show since January 2017, when WTMD officially launched the concert series.

“It’s brought a whole new revenue stream to the station,” Sessa said. The station sold 1,100 tickets for the June concert — not enough to sell out the venue, but a strong turnout from Sessa’s perspective. “To hear the size of the crowd, I got choked up,” Sessa said.

As the father of two young children, Sessa knows the appeal of events that cater to families. In early 2016, he was wearing a WTMD T-shirt when he took his two-year-old son to a storytime at the local library. Other parents told him how much they loved the station and missed going to its music events. Due to nap times, WTMD’s weekly Live Lunch concerts, a free midday series hosted in the station’s in-house performance space, were no longer an option. The First Thursdays Festival, a free summer concert series staged in a waterfront park, had become even more difficult to attend. Each monthly festival, featuring six bands on two stages, begins at 5:30 p.m. “That’s witching hour for kids,” Sessa said.

Where others might have been resigned to an audience drifting away due to lifestyle changes, Sessa saw an opportunity to engage even more people.

“There’s a whole generation of people listening to WTMD,” Sessa said. “They’d come to our shows when they were in high school and college. We’d been there for … all of those stages of their lives, up until they had kids. Why not start hosting concerts on Saturday mornings?”

Since WTMD could host in-house concerts for nearly 500 people, Mullins recalled, “I thought, why not?”

Getting the word out

For the first tryout of Saturday Morning Tunes, the Grammy-nominated kids’ rock band Milkshake performed at WTMD in April 2016. “It sold out in advance,” Sessa said.

After that success, Mullins said he wanted to take time to plan and develop Saturday Morning Tunes into a series. Key decisions were made, such as scheduling the monthly concerts to run from September to June, coinciding with the school year. The station also explored the potential to stage concerts at outside venues.

The biggest hurdle was getting the word out about the concerts. WTMD started by using its own airwaves, running promos and directing DJs to talk up the first concert, Mullins said.

WTMD has “a big advantage over other organizations trying to do events — we have a radio station,” Mullins said. “We can go heavy with promotion. This includes social media and our website.”

The station also partnered with (cool) progeny, a Baltimore lifestyle website for “modern” parents. The website, which maintains a community calendar and promotes family-focused events in an “Out & About” section, wrote up the concerts and supports the series as a sponsor. Other local outlets also picked up on the story. Family-friendly organizations, including the Port Discovery Children’s Museum, Towson University’s College of Education and Race Pace Bicycles, signed on as sponsors, Mullins said.

In booking musicians, Sessa said he’s mindful about choosing bands that will engage both children and parents, and he looks for ways to develop educational components, such as bilingual performers and a special concert for children on the autism spectrum.

“It’s important for us to show kids all different kinds of music, with multiple languages and featuring musicians from all walks of life,” Sessa said.

Saturday Morning Tunes has featured a range of musical styles that includes the Baltimore Rock Opera Society — which performed a pop-rock show about the 1960s — to Scotty P, a reggae artist who has performed in Baltimore for 20 years. A Grateful Dead tribute show, staged early this year, sold out. When Phoam hit the stage for Saturday Morning Tunes, fans were eagerly anticipating a June 22 Phish concert at Merriweather Post Pavilion, an outdoor music venue about 25 miles from Baltimore. Sessa called WTMD’s tribute show a warm-up for the real deal.

“We’re basically raising the next generation of WTMD listeners at the shows,” Sessa said. “We want parents to reengage with us. I want Saturday Morning Tunes to be something parents and kids can both enjoy together.”

For the performers, Sessa sees Saturday Morning Tunes as a marketing opportunity. In addition to advance publicity for each concert, performances are broadcast live on the radio. WTMD also produces a video stream for Facebook Live.

Deciding on the venue for each act is another key step in planning the series. When the shows are staged in-house at WTMD, performance costs are easier to manage, Mullins said. Talent fees vary depending on the band, he said.

WTMD typically charges $15 for tickets for adults; for children age 2 and older, the price is $10; infants and toddlers attend for free, Sessa said. The station also sells “Family Four Packs” for $40.

Ticket-buyers automatically become WTMD members and are added to the station’s email newsletter lists. Newsletters typically promote upcoming events or may be part of a targeted campaign, Sessa said. An email sent before Mother’s Day encouraged procrastinating dads to  “bring their little ones to Saturday Morning Tunes and give their wives a morning off,” he said.

Since the series launched in early 2017, more than 6,000 parents and kids have attended performances, Sessa said.

Those 6,000 attendees include roughly 3,000 families, according to Kristin Laporte, director of membership, and 1,500 of them are considered WTMD members. Laporte said 53% are first-time members, 17% are lapsed and 30% are active members whose ticket purchases are considered an additional gift. WTMD’s membership file has grown by 16% since the concert series’ launch, she said.

This year the station is hoping to attract another 5,000 new parents and kids to performances. For the new season that begins in the fall, WTMD is planning as many as four shows in larger offsite venues that will accommodate bigger crowds.

“We want to go big, to keep growing this series,” Sessa said. “We need to keep bringing families back for more shows, and connecting with new parents and kids who haven’t been to a Saturday Morning Tunes before.” WTMD is also exploring how to expand the series by staging shows in Washington, D.C., and Annapolis, Md., to attract new members.

Both Sessa and Mullins see Saturday Morning Tunes as an event that other stations can easily replicate. “It’s easier than you think to produce a series like this,” Sessa said. “There’s been an explosion in kid-friendly, family-friendly music that wasn’t here 15 years ago.”

Kid-friendly performers — including national acts on tour — have begun reaching out to WTMD about bookings, Sessa said. If a nationally touring artist is performing in the Baltimore region on a Friday or Saturday night, they may be willing to add a Saturday Morning Tunes performance to their schedule. Mullins describes Saturday Morning Tunes as a remarkable success. “Our listeners seem eager for it. There’s a great education component. The parents are members and — who knows? — those kids may grow up to appreciate public radio.”

At the Phoam concert at Power Plant Live!, Aaron Cohen and his 5-year-old son, Hugh, of Montgomery County, Md., sang along to the music. “We both like Phish a lot,” Aaron explained. He’d love to bring Hugh to nighttime shows, he said, but for now Saturday Morning Tunes is a way to introduce him to concerts.

“We got him into Phish in utero,” Jen joked, pointing at Max.

One thought on “By inviting their kids along, WTMD engages new parents missing out on live music”