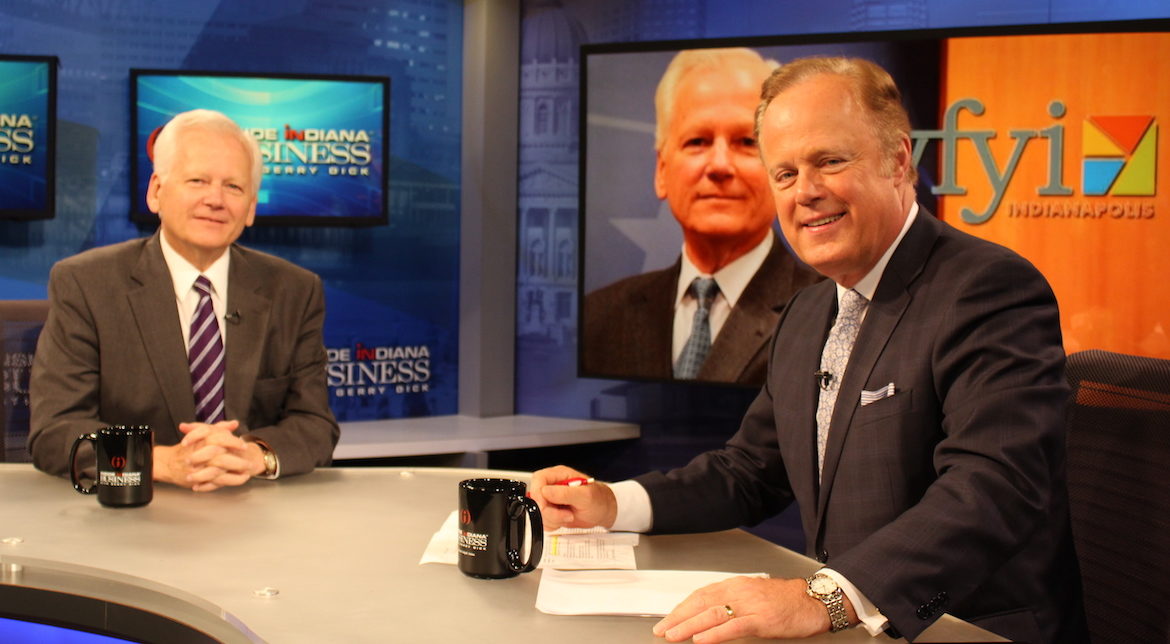 Wright, left, makes his final appearance on "Inside Indiana Business with Gerry Dick."

Lloyd Wright is a lifer. He was bitten by the public broadcasting bug straight out of college and has invested 43 years in public television and radio.

Except for a stint at Chicago’s WTTW ­— a formative experience he describes as his “grad school” — he’s been a loyal Hoosier. He spent more than three decades at WFYI in Indianapolis, his hometown station. For most of that time, he’s been president and CEO of the joint licensee.

Lloyd is proud of WFYI’s $20 million capital campaign, its state-of-the-art facility in downtown Indianapolis and its achievements in adopting community engagement as the centerpiece of its mission and service. As Lloyd told Current Executive Director Julie Drizin, his work has been guided by the principles of “servant leadership.”

I went to Indiana University to pursue a degree in telecommunications and fell in love with television production while I was still in college. But I couldn’t find a job. So, I accepted a position that I thought would tide me over, not realizing that it would launch a career in educational public media.

I eventually got my hands on some equipment and did instructional series on mathematics and on reading effectiveness. With those series, I built a resume reel that led me to a TV production job at WTIU in Bloomington.

So, I came into public media by accident. I took a job that I wasn’t too excited about, but I learned a lot about the power of media for educational purposes, and that led to opportunities with PBS and NPR stations.

What do you consider your most important accomplishment at WFYI?

Putting the community at the center of our mission and our service, and how we’ve managed to integrate community engagement into our work.

I’m great admirer of Jack Galmiche [the late CEO of the Nine Network in St. Louis]. He and I worked with Rich Homberg [of Detroit Public Television] and others on collective impact — when a media organization places its resources around a focused area of concern in the community. With Jack, it started with the mortgage crisis, and WFYI participated in that. Then we worked on American Graduate. Through that work, we changed WFYI from the inside out.

As Richard Harwood wrote about in his book Why We’re Here, by turning outward to face the community, we can better understand the issues that exist in our communities and why they persist, and try to move people to action in a variety of ways that are helpful to them or the community.

What is the funniest thing that you remember happening during your years in public media?

We were making some progress in cultivating a relationship with a significant donor in our community, and I went to visit him with two development staff members on his birthday. It was a visit tied to our capital campaign.

We were warned that there was a good chance we wouldn’t be able to see him because he’d been sick, but we decided to take our chances and hopefully extend our greetings to him.

When we arrived at his home, they showed us into the library where he was sitting. As I walked across the room, it struck me that he looked terrific, and I said, “You look like a million dollars!” As the words were came out of my mouth, I knew it was not the right metaphor, but he didn’t pick up on it. He replied, “I feel pretty good. I’ve been a little sick but I’m feeling better.” Our meeting lasted 40 minutes or so. When we left, as soon as we got back in the car, the staff members said, “’You look like a million dollars?’ What are you thinking?”

What key piece of advice or message do you have for people entering public media careers today?

I worked at WTTW in Chicago for about six years with Dick Bowman, He was senior VP of programming and just a great guy. And then I returned home to Indianapolis to head up WFYI ‘s television production department. About 10 months later, I was encouraged to apply for the president and GM job, which was quite a shock to me.

Dick was my mentor, so I called him and said, “You won’t believe this, but they’ve asked me to throw my hat to the ring for the opening for the president’s job. What advice do you have for me?”

He said: “Don’t worry about what you don’t know, and surround yourself with people who do know, and go buy yourself two new suits.”

That’s what I did. I’ve made a career out of working with really talented people. I’ve been fortunate to be the leader but I was never the smartest one in the room. That includes surrounding yourself with quality board members, members of your management team and the creative people around you. I give a lot of credit to those around me who have helped make WFYI and me successful.

As leaders, we sometimes expect ourselves to have all the answers, but you can’t. That’s why I’m a proponent of servant leadership. In order to lead, you must serve. That can be done in a variety of ways and can be a culture developed in your organization.

So, I would encourage a person coming into an executive position to look at the attributes of servant leadership.

Was WFYI your first CEO position?

Yes. It was quite a stretch for me. I had just turned 35 and the majority of my experience in public broadcasting had been in Chicago. That was a great place to learn and I had great mentors.

So, in retrospect, what do you wish you knew or understood before becoming an executive?

It’s sort of like George Burns’ line, “If I if I knew I was going to live so long I would have taken better care of myself.”

When I was in school, people told me, “You ought to get at least a minor in business or a major in business because then you can you can do anything in any industry.” I always felt like I was more on the creative side, and I wasn’t that taken with the notion of business.

I was not well prepared for a lot of the business and other aspects of an executive position. And members of WFYI’s board at that time saw something in me that I didn’t see in myself and allowed me to grow into the position.

I really was limited in my abilities to work with or head up a board of directors, and that occupies a big part of an executive’s time ­– developing a strong, engaged, strategic board that can help move the organization along. I had a lot of growing to do.

What was the hardest thing you tried to do and failed, and what were your takeaways from that experience?

Back in 1995–96, during the Newt Gingrich era of zeroing out federal funding to CPB, there was suddenly a great emphasis on questions of whether the public TV system was  “overbuilt,” especially in the overlap markets. Around that time a second public television station emerged just five miles from us. WTBU was licensed to Butler University and the last CPB-qualified TV station to sign on the air.

CPB did a very smart thing: It identified 18 markets with multiple TV stations, and created incentive grants to encourage these stations to come together in some way — to consolidate, to merge, to collaborate. That was really challenging at the time, but it launched conversations in Indiana among the eight PBS stations and later the nine public radio stations. We’ve done a lot of really good work together, and we still are doing great work together.

But, I’m not sure we’ve gone as far as we could in terms of consolidation, in finding those economies of scale and efficiencies. We’ve done as much as we can without merging.

Ultimately, WTBU and WFYI did enter into a joint operating agreement for five years. We ran their master control and shared staff in our single engineering and fundraising departments. That worked pretty well, and then Butler University had an opportunity to sell the TV station, so the five-year partnership went away almost overnight.

Not exactly a failure! What are your concerns now about the future of public media?

We are always challenged by the capital needs of our organizations. Public broadcasting is a capital-intensive industry, and that will continue to be a challenge even as technology becomes less expensive and more effective than ever.

That’s another challenge for the future — keeping up with rapid changes in technology. Right now we are dealing with the skinny bundle issue and making our content available everywhere on all the streaming services. And, tied to that, how we maintain our relevance in the rapidly changing digital media environment.

Do you think that the public media system needs to change or be restructured? If you had the power to do it, what would you do?

I’ve always hoped that there could be greater integration between PBS and NPR. There is much more collaboration these days, which is encouraging. Perhaps there’s more that can be done there.