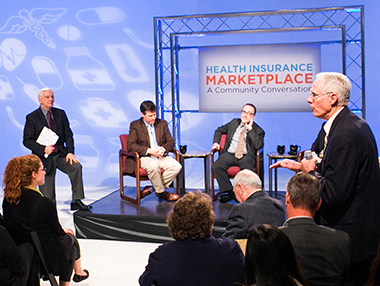 Nine Network explores community responses to health insurance options available to Missourians under the Affordable Care Act in a forum broadcast live in November. The St. Louis station worked with local partners to identify health care as a topic of special concern to the community. (Photo: Jason Winkeler Photography)

This article is the first in an occasional series examining public-service strategies adopted by local public TV stations as they seek sustainable models for the new world of digital media. Read more about the series.

Dave Hilliard, who runs a St. Louis–based national nonprofit that helps economically disadvantaged teens, calls himself a lifelong viewer of St. Louis’s public television station KETC and “a not-a-very-faithful investor over a lifetime of viewing.” But starting three years ago, he personally increased his donations; and while he declined to name a figure, he said the station has now received from him “more than I ever would have thought.”

What changed? “My philanthropy is focused on organizations that make a difference in the life of the community. That’s where they’re working, so now they’ve got my dollars,” said Hilliard, chief executive of the Wyman Center, which spent just under $5 million in 2012 on its programs assisting teens in developing skills and educational opportunities that will help them succeed as adults.

Hilliard is just one of the donors who have helped KETC, which calls itself the Nine Network of St. Louis, increase revenue as it moved to what it calls a “community impact” model of public media service. In the last fiscal year, community engagement contributed 12 percent of new funding, or about $1.3 million, to the station’s operating budget, and is expected to increase  again this fiscal year.

A similar shift in strategy has helped Detroit Public TV post substantial revenue increases as the national economy recovered from the recession. The station posted revenues of $15.8 million in 2009. Five years later, its fiscal year 2014 revenue budget is approaching  $24 million, a gain of more than 50 percent. Foundation and government grants, production funding and individual contributions have all increased, and one year into a major gifts campaign the station has raised $2.6 million of its $4 million goal.

The gains have come even as the station’s ratings have remained flat, suggesting that members of the community value the station in ways other than the amount of time spent watching. “The single most important asset a public television station owns is relationships,” and not its content, as a broadcaster’s more traditional mindset would believe, argued Rich Homberg, Detroit Public TV president. “It’s not just, ‘Are you a viewer or member?’ It’s trusted relationships. And to be in the relationship business you have to be invested in understanding all these folks.”

While each station that has adopted the community impact model takes a slightly different approach, the core of this service strategy calls for working with local partners to identify challenges faced by the community, aligning local productions and outreach to help viewers connect with local partners who are working to address these issues and documenting results. Homberg called it “a framework for expanding our effectiveness in our cities.”

While most public TV stations have had active outreach programs for decades, this model goes much further. “At its best, community engagement is no longer a department; it is a way of operating a successful station,” Homberg said. Many stations adopting the model make engagement “a part of their strategic plans,” he added.

Detroit, for example, has “worked hard to build a relationship with the United Way, resulting in a five-year federal grant that is taking us into the interfaith community to develop a parenting skills training effort,” Homberg said. “DPTV created the media and the guides. The United Way support us in their early learning centers. The interfaith community becomes our partners.”

The community impact strategy implemented in St. Louis and Detroit has evolved out of several converging initiatives.

Production funding grew substantially for Detroit Public TV after it adopted the collective impact model. Individual contributions increased as major donors recognized the difference in its service strategy. Click for a larger image.

CPB’s decision in 2008 to back the Nine Network’s engagement with homeowners facing foreclosure was a key turning point for the station. The initiative, which rolled out to 32 markets nationwide, helped connect financially struggling homeowners with organizations providing foreclosure-prevention assistance “in a way that would actually lead to measurable outcomes, measurable results,” said Jack Galmiche, station president. CPB’s next engagement initiative, American Graduate, used a similar model and was designed to improve the high school dropout rate. CPB also chose the St. Louis pubcaster to oversee it nationwide.

American Graduate “opens the door to a much larger dialogue around the issues we face in education,” Homberg said. Adding in PBS’s early childhood content and online education portal PBS Learning Media, he said, “You instantly have assets for children, parents, teachers and caregivers. American Graduate gives you a platform to talk to leaders and stakeholders about all of the issues behind education.”

Galmiche uses a military metaphor to explain his station’s role: “We’re the Air Force and these other organizations are the Army.” With public television airwaves reaching a broad swath of the community, he said, local pubcasters have the power to create “greater awareness and understanding around these issues.”  Organizations that work in the community as direct service providers “go in on the ground and actually help address these issues.” Nine Network, he said, acts as a “trusted convener” to amalgamate community resources.

The goal, he added, is for public media, when combined with others, to “achieve results that those organizations cannot achieve in isolation.”

Locally, KETC has since applied the model to six issues of crucial importance to its region, from health care to St. Louis’s entrepreneur movement. Its network of partners helped the station choose what to focus on, said Amy Shaw, KETC’s senior v.p. of community engagement.

In developing coverage of the Affordable Care Act, for example, “we knew that there would be a lot of media clutter,” Shaw said. Working with the Missouri Foundation for Health, the station decided to present “basic information” within its local productions. For example, producers of Stay Tuned, its Thursday primetime public affairs show, focused on increasing awareness of who is eligible to sign up and how they could do so.

The Wyman Center’s Hilliard said Nine Network’s leaders “have created something here that this particular community was desperately in need of. I call it the ‘community megaphone on issues of importance,’” he said. “They have thrown out the old model of issue-driven stuff that can change rapidly; they’re not driven by ratings desires, they’re really driven by adding to the value of life in the community.”

Key for him is the station’s stated intent to stick with its chosen topics over many years as it tackles issues such as the high school dropout rate, which he described as merely “a symptom” of broader challenges, including chronic poverty. “This is not a two-year-and-out project,” he said. “In my view they’re weaving a tapestry; they’re building public awareness and public engagement.”

Not a ‘bright shiny object’

Shifting to a long-term focus at Nine Network hasn’t been easy, Shaw said, because it required the station to give up shorter-term initiatives that generated grants and programs or other content. For example, the station now rarely applies for the outreach or community engagement grants related to national productions, on which it used to live. “They invariably make our work more episodic and don’t always align with the most important issues that concern the broader community,” Shaw said.

That change is a challenge: “It’s harder to shift because you have to build so much capacity so quickly, and there’s no body of work to show for it,” she said. Moreover, Nine Network executives have had to manage expectations internally, helping staffers understand that “this is not the next bright shiny object” but an evolution that will lead to long-term sustainability and impact.

Detroit Public TV’s Homberg describes the station’s values statement as “the foundation for everything that we do.”

As Hilliard pinpoints, a community impact approach means repositioning the outreach work that stations have traditionally undertaken. This has become a source of tension — though Homberg described it as “a positive type of tension.” The issue surfaced during a 2010 meeting among several MMG stations when  veteran outreach professionals voiced frustration along the lines of “‘I’ve been doing what you’re talking about for years and nobody paid attention,’” Homberg recalled.

But the community engagement as practiced by St. Louis and Detroit differs in some key ways from traditional outreach. Not only are the issues chosen after extensive consultation with the community, there are also built-in highly specific goals, such as the number of people each initiative should reach or measurable changes in awareness of an issue.

For St. Louis, the key distinction lies in “being intentional about what you are trying to achieve at the outset and collecting data along the way to help see the progress,” Shaw said. To follow through on that, in March 2012 Nine Network took the unusual step of hiring Charles Gasper as a full-time director of evaluation “who is helping us frame our local work and initiatives, and thinking intentionally about outcomes, what are we really trying to accomplish with this,” Shaw said. Gasper goes so far as to monitor every tweet surrounding broadcasts of Stay Tuned, to see if the intended messages are getting across to viewers.

Not every priority identified by the stations has panned out. Despite PBS’s major educational assets, “we are still trying to find our way to the table in education,” Homberg said, citing insular school systems and a decentralized structure. The station has formed a working group with community leaders as it seeks to build relationships with educators.

Adopting the model also requires stations to align their local content with their engagement goals, while also occasionally tying it back to select PBS programs, such as last fall’s Frontline film on head injuries in football.

In St. Louis, the station is no longer “just broadcasting or creating content for the sake of it,” said Shaw. Instead, Nine Network focuses more of its storytelling on the progress that is being made on its chosen issues.

In the past, community leaders might have convinced Nine Network to produce a 30-second PSA for a cherished cause, Hilliard said. Now they can expect much deeper exploration of issues in hour-long roundtables and occasional town hall broadcasts.

In Detroit, the conversations that used to start with, “We have an idea for a doc,” now begin, “We have identified a need in our community,” Homberg said. For the last four years the station has covered the Detroit Regional Chamber of Commerce Mackinac Policy Conference and used its discussions over the region’s economic future to generate story ideas for its public affairs programs, including Michigan Week and American Black Journal, both of which were reworked.

Revenues for local and national productions at Detroit Public TV are projected to reach $6.2 million this fiscal year, more than double the $2.4 million spent in 2009. The growth is driven by foundation grants supporting, among other things, a national documentary on bipolar mental health issues that the station’s partners had identified as a community need and a program on the changing way electricity is generated, a follow-up to the station’s two-hour award-winning 2011 documentary Beyond the Light Switch. One Detroit-based foundation, the McGregor Fund, stepped up to support local arts programming as part of the MMG’s national arts initiative after becoming convinced of the station’s long-term commitment to the subject.

“If we stay at the table, and stay invested in understanding the issues, great documentaries and weekly shows come out of them,” Homberg said, and the productions are more sustainable.