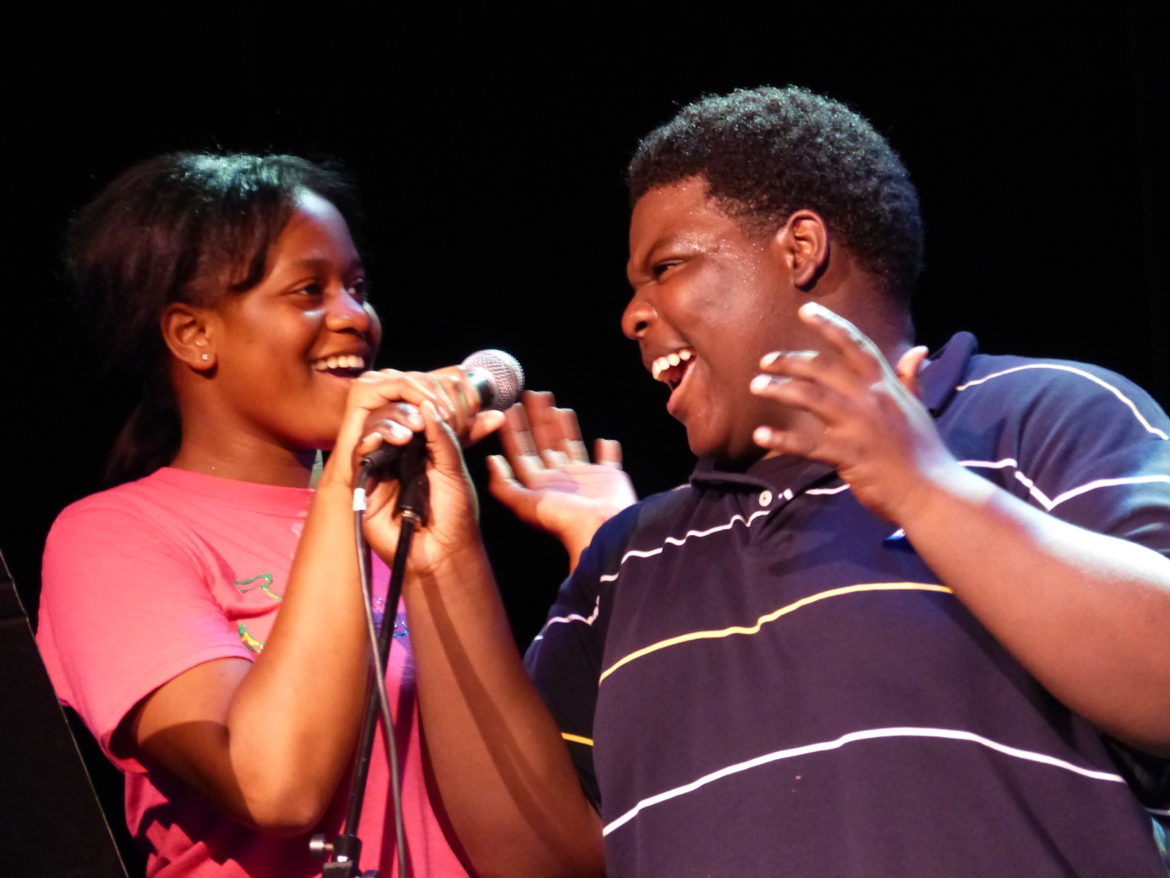 No one in that theater could have left without a sense of hope that together we can do something to stop senseless violence.

Timberley Princess Brown got down onto her hands and knees to show how her father jumped into the grave of her cousin, Pooh. “It was the worst death I ever experienced in my life,” she said.

Timberley is 16. She was one of six teenagers brought to the public media stage of the Pabst Theater last month to speak, dance, rap and sing about day-to-day life in “53206,” or Center City Milwaukee. Hard-hit by job losses of the 1980s and corrupt housing practices in the ’90s, it is the neighborhood where the annual homicide rate increased 69 percent in a single year, from 2014 to 2015, the fastest in the country.

The performances by Brown and other Milwaukee teens before a packed house were a new sort of public media convening emerging from Localore: Finding America, an initiative led by the Association for Independents in Radio. They culminate months of work by independent producers, local stations and my team at AIR to invent new models for public service in partnership with and for those who are not yet deeply engaged with public media.

A child writes a mailbox stationed at the Tucson Festival of Books by the Localore project Dímelo. (Photo: Sophia Paliza-Carre)

In Milwaukee, Eric Von with Brad Lichtenstein joined with WUWM to create Precious Lives: Before the Gunshots. They sought to bring together disparate parts of the local community through the pieces they created for broadcast and the performances staged at the Pabst Theater. To a casual eye, half the audience in the theater represented the station’s white, highly educated core audience, who probably turned out after hearing promos that aired in heavy rotation on the station. The other half was mostly black family, friends and supporters of the teens on stage. They were encountering public media in a new way, or perhaps for the first time.

That’s how it appeared, anyway. And that’s what WUWM and the Precious Lives team — and my team, in our role as the producing entity and architect of Localore: Finding America — hoped could happen when public media turned over its microphones, digital and broadcast platforms, and physical spaces to let communities tell their own stories, on their own terms.

Here’s our next challenge as the local incubation phase of Localore winds down: figuring out what really happens when public media convenes these special live events. We intend to document the impact in a way that pushes beyond the assumptions that can be made from simply taking a quick scan of the audience. I’d like to tell you about one way we’re measuring our work.

Since last November, when 15 independent teams of Localore: Finding America landed in local communities across the United States, the producers have studied the day-to-day experiences of citizens living in each location. They established new connections for and with people whom the host stations had not yet effectively reached. In January local projects began rolling out a broad range of live events, with one of the first in New Orleans as part of Unprisoned: Born on Parole, created by indie producer Eve Abrams and Laine Kaplan-Levenson with WWNO. The events blossomed into scores of gatherings, bringing the military community to a drive-in movie theater in Watertown, N.Y., for example; standup storytellers to a black-box theater in the Anacostia neighborhood of Washington, D.C., and an outdoor arts space in North Philadelphia. In the Sandtown neighborhood of Baltimore, people came together for a skating party at Shake & Bake, a popular family-centered rink and bowling alley.

Tony Jones of the Serenity House Men’s Group in North Philadelphia tells a story at an event staged by the Localore project Every ZIP Philadelphia. (Photo: Miguel Martinez)

Through events like these, thousands of people have come together to share their experiences on matters of common concern — faith and religion, crime, gentrification, immigration and poverty. Our thesis is that by creating conditions where people can meet in a new way, indie producers and stations will discover a meaningful extension of public service media to build on.

With our partners in this public media experiment, we began with some hypothese­­s: that those who live in neighborhoods with low station membership don’t yet know much about public media, or they know about it but weren’t interested or didn’t feel served by the content. At AIR we think that if public media understands more about those living in underserved communities, we will find opportunities for independent producers and stations to strengthen and expand our public service in ways that genuinely inform, enlighten and engage a wider audience.

We also believe that our approach will ultimately lead to an expansion of voices and perspectives; a public media that effectively reflects more of what it is to live in America today.

AIR has partnered with the Public Radio Program Directors Association, Greater Public, the National Federation of Community Broadcasters and the Independent Television Service to hire Edison Research to conduct a new benchmark study based on polling data from these events.

We hope to gather new actionable information, including findings from a segmentation analysis providing insights into how this new constituency compares to core pubmedia listeners, and where they converge and diverge in terms of income, outlook and media consumption.

Edison is dispatching teams to Philadelphia, Kansas City, Knoxville, New Orleans, Tucson and Richmond to collect data at live events. Their study will be included in a wider body of findings AIR staff will gather in the coming months.

Our experience so far is showing us that bringing thousands of people together across micro-communities and focusing on timely issues of gun violence, gentrification, imprisonment, immigration, military families and opioid abuse represent a powerful opportunity. Stay tuned.