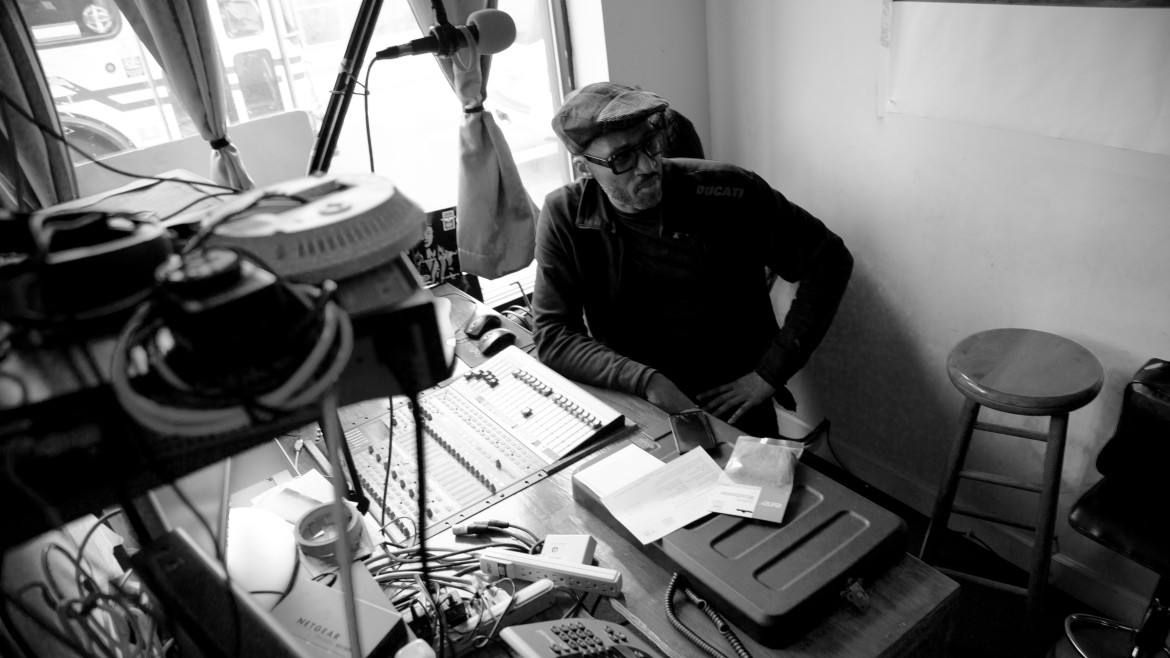 For years the long-neglected, predominantly black Anacostia neighborhood of Washington, D.C., has fallen off the city map — sometimes literally.

But a new community-based project, Anacostia Unmapped, is training local producers to go into the neighborhood and tell unfiltered stories about the area, reporting on the community with a familiarity that the city’s public media outlets struggle to achieve.

Facilitated by Washington’s WAMU, the project is giving longtime residents a platform where they can express a full range of emotions: confusion about the future, disdain for developers whose plans steamroll over their neighbors and love for their community.

“So you can point to this community as a place where people actually live,” said John Johnson, an Anacostia resident and producer on the project, “and not the Christopher Columbus mentality white people often have, like they discovered something when there were already … residents in Ward 8,” Johnson said, referring to the section of D.C. that contains Anacostia.

“There were people here before you discovered it.”

Putting Anacostia back on the map

Anacostia Unmapped is one of 15 Localore: Finding America projects across the country that are promoting diversity and new storytelling models while aiming to reach undercovered corners of communities.

This latest phase of Localore, an initiative spearheaded by the Association of Independents in Radio, kicked off in November 2015. Each Finding America team includes a creator and station collaborator who are working to develop a sustainable project that can continue past July, when Finding America wraps up.

Anacostia Unmapped creator Katie Davis, a longtime public radio producer, had never walked around the neighborhood before joining up with WAMU on the project. Growing up in D.C., Davis often heard “Don’t go there.”

When she did go, not everyone welcomed her. Davis said she had to call Anacostia resident Kymone Freeman several times before he agreed to become a local producer on the project. She also asked friends of his to lobby for her.

Johnson softened up after Davis sent him several of her stories to listen to, and offered to walk her around the neighborhood. A dominant theme emerged during her visit: growing development displacing longtime residents who can’t afford the rising property values.

“… [T]hey’re building half-a-million-dollar homes … pulling out the red carpet for people on the outside of this community,” Johnson said.

The project appealed to WAMU because its programming hasn’t often sounded like Washington, said Brendan Sweeney, managing producer for new content and innovation. Anacostia is just seven miles from the station’s headquarters, but WAMU didn’t want to just parachute into the neighborhood.

“Katie spent a lot of time there without ever turning on a microphone,” Sweeney said. “On a certain level, she’s using some low-tech approaches that sometimes we don’t put enough of a premium on.”

WAMU had previously taken its local talk show, The Kojo Nnamdi Show, to Anacostia and considered it a success, Sweeney said. But reporting on a neighborhood as an outsider poses challenges, he added. Too often conversations are framed as definitive, but he sees Davis’s work as more subtle.

The Kojo production in Anacostia introduced Sweeney to Johnson, a poet and playwright, and he recommended that Davis consider Johnson as a producer.

The producers, all black and living in Anacostia, quickly became adept with their audio equipment. Each faced a learning curve with other elements of producing stories and had varying levels of media experience, but it helped that they were already accustomed to being in the public eye. Davis asked veteran sound engineer Flawn Williams to train the producers, provide feedback on their pieces and work with her to prepare stories for broadcast.

Davis doesn’t assign producers specific stories, but instead asks them to pursue what they feel is important. The stories that air are mostly unfiltered, with subjects speaking freely. The audio reveals an intimacy with residents that an outsider can’t immediately achieve, Davis said.

“I think really good radio asks questions, and most of this audio that they bring back is interesting,” Davis said. “You finish, you put it on the radio, but there are still a lot of questions. But not just what would happen next, but really powerful questions like, if people have been marginalized in an area for 40 years, do they own it or not?”

“You could actually hear somebody”

Each piece is between four and seven minutes long and airs Wednesdays during WAMU’s All Things Considered broadcasts. In the project’s opening piece, “The Lion and the Map,” Freeman shared how he stumbled on a D.C. map that showed nothing east of the Anacostia River, including the Anacostia neighborhood, yet included Virginia’s Arlington and Alexandria. Freeman argued that Anacostia will be silenced until the community collects and tells its own stories.

That segment had the second-highest number of shares and “interesting” marks among more than 200 stories WAMU has fed to NPR One since October 2015.

Davis expects to complete up to 24 stories by the end of the project. So far Pondexter-Moore has interviewed residents of Barry Farm, one of D.C.’s largest public housing developments, that’s slated for demolition. Johnson spoke with longtime resident and friend LaTeashea Lofties, who recalls her Aunt Helen as an old-school version of the neighborhood watch.

Freeman’s interview with Teresa Howe-Jones, Anacostia’s point person if you want to get anything done, was among Sweeney’s favorites.

“It felt like you could actually hear somebody,” Sweeney said. “Sometimes we have this tendency to over-edit and to insert ourselves in every little silence. I’m really impressed with the way that some of these pieces emerge in terms of how much they breathe.”

The project is also introducing WAMU to people who may not have been familiar with the station. Joking with Davis, Johnson said the station has “five black listeners.” And his visit to the station revealed a disconnect: “When I went up there, it seemed like a whole bunch of white people,” Johnson said.

As the pieces have aired, Johnson’s assumption was challenged; he learned that some of his neighbors are regular listeners. Still, before the project he rarely saw his interests reflected in WAMU’s programming or coverage.

WAMU has established a framework for continuing to find stories in Anacostia after the Localore phase of the project ends, Sweeney said. Neighborhood producers will keep their recording equipment and continue collecting stories.

Anacostia Unmapped producers plan to cover a housing debate among local politicians May 31. And, in July, Johnson will host a community event at the Anacostia Playhouse, where he wants to bring together people he’s interviewed.

“Hopefully, it will create community and have neighbors become even closer,” Johnson said.