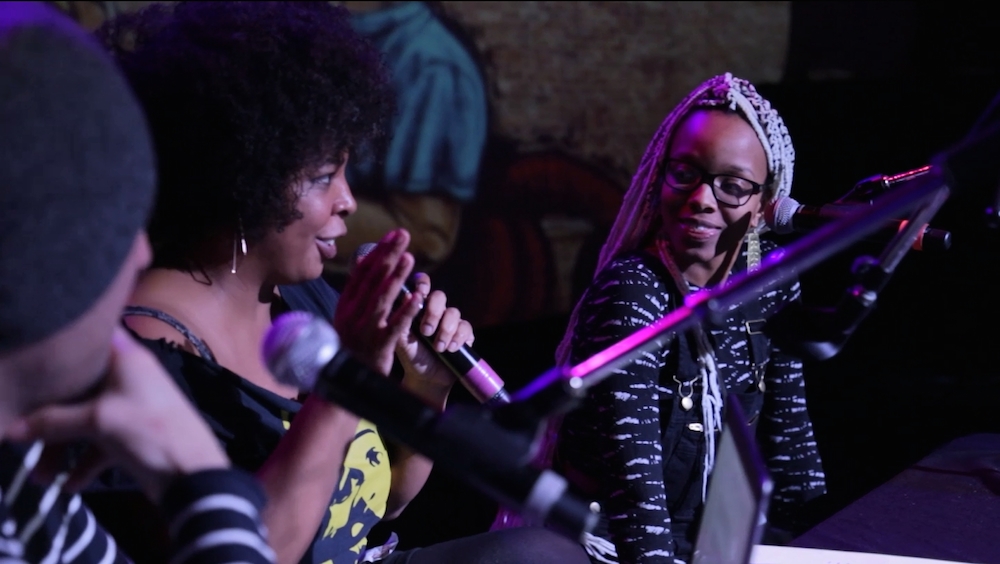 As the Chicago public radio station Vocalo approaches its tenth year, it’s entering a new stage of growth that’s testing its potential appeal to bigger audiences in its city and possibly across the country.

Led by then-CEO Torey Malatia, Chicago Public Radio launched Vocalo in 2007 to reach a more racially diverse audience that would reflect its city’s demographics. It has since shifted from its original programming strategy, which emphasized listener-contributed content and social networking.

Today’s Vocalo sounds more like a mix of commercial and community radio. Broadcasting from a translator on the John Hancock Center in downtown Chicago and a signal in northwestern Indiana, it features its own weekday morning talk show instead of Morning Edition and a music mix of hip-hop, R&B and indie rock during weekdays.

Despite the unusual musical genres for a noncommercial station, Vocalo remains public radio. It aims to distinguish itself from the commercial hip-hop stations in Chicago that play a “soundtrack for everything that’s not right in this city,” said Silvia Rivera, managing director of Vocalo. That involves screening for “lyrics and the music that’s telling a story,” she said, and looking for lesser-known artists, especially local acts.

Other shows include Beat Latino, which features Latino music, and Domingos en Español, a Spanish-language music and talk program. In recent years, Vocalo has canceled afternoon and evening talk programs to give more airtime to music, according to Rivera.

This unique programming has caught CPB’s attention. In January, the funder gave Chicago Public Radio $450,000 for research to “develop and refine a fresh format that can potentially be scaled to other public radio stations,” said Erika Pulley-Hayes, v.p. of radio. Consultants are also researching the format’s viability in Baltimore and Norfolk, Va.

“These genres of music haven’t necessarily been played, at least not heavily in public radio, in the past,” said Pulley-Hayes. “We’re trying to see if it can be a mechanism for attracting new audiences to public radio.”

A CPB-backed market survey by Paragon Media Strategies conducted from April to June questioned 600 radio listeners in Chicago ages 18–44. Only 21 percent were aware of Vocalo, and 13 percent listened in a typical week. But those who listened were 29 percent Hispanic, 14 percent African-American and 11 percent Asian. Their average age was 32.

Both listeners and nonlisteners in focus groups rated Vocalo “favorably,” and target listeners said they would recommend the station to friends.

But Vocalo’s weak coverage of Chicago has limited its ability to gauge whether its format might resound with a wide audience. The station has never achieved an average weekly cume of 43,000, the threshold to appear in the market’s Nielsen ratings, Rivera said. Audience data Vocalo does receive from the Radio Research Consortium show that it has reached upwards of 16,000 weekly listeners.

By comparison, WBEZ had an average weekly cume of 582,350 in the first half of the year, according to the station.

Vocalo now has a chance at more listeners, however, after receiving FCC approval in May to boost its Hancock Center signal. The station’s potential audience jumped from 400,000 listeners to over a million.

“That’s now put us in the position to reach the most people we’ve ever reached in our history,” Rivera said. “We’re ready to start testing this model, this format that we’ve been refining over these last few years, in front of a broader audience here in Chicago.”

Today’s Vocalo is worlds away from its initial approach. When Malatia created Vocalo in 2007, he wanted to abandon everything listeners expected to hear on public radio, including network programming and hourlong shows. Most of Vocalo’s inaugural staffers had little or no radio experience.

Vocalo emphasized digital over broadcast by airing content contributed by web visitors. In its first two years, it was branded as Vocalo.org. Social networking was in its infancy then, but Vocalo encouraged interaction in an online user community.

Vocalo was much anticipated within public radio. Jake Shapiro, now c.e.o. of RadioPublic and then an advisor on Vocalo, called it “one of the most exciting things underway” in public radio.

It was “the coolest, edgiest, most forward-looking project in the [public radio] system, by far,” said Robin Amer, who worked for Vocalo in its first two years.

But from the beginning, things didn’t go as expected.

It first broadcast over a small repeater station in Michigan City, Ind., purchased from New Jersey station freeform WFMU. CPR planned to move the antenna closer to Chicago but struggled to find available spectrum in the crowded radio market.

Instead it built a tower in Northwest Indiana to improve coverage. After two years of effort, the signal reached only as far as Northern Indiana and into some of Chicago, south of downtown.

“Vocalo’s signal issues were a major disappointment to all of us — me, our engineering consultants and staff team, our board, our production staff,” Malatia said.

The signal coverage “did not reach the diverse South and West Side audiences in Chicago that we said we were trying to serve,” said Amer, who is now deputy editor of news at the Chicago Reader and piloting a podcast for WNYC. “It was a real letdown. And I think a lot of people on the staff felt misled in one way or another.” (Malatia said he did not make promises about the signal improvement.)

After the initial disappointment, CPR continued to try to expand Vocalo’s reach. “We spared nothing in trying to solve this problem,” Malatia said. The station purchased another low-wattage FM signal for Vocalo and put a translator on the Hancock building.

But Vocalo also struggled with mission and programming. Much of Vocalo’s early content, which included stories shared by listeners, was “not great,” Amer said. Vocalo’s staff spent a lot of time improving it for broadcast.

Vocalo was too ambitious from the start, Amer added. “I respect [Malatia] very much,” she said. But everything that was easy about radio — music, fixed schedules, personality-driven broadcasts —  “he wanted to take away. … Everything was supposed to be different. And that was really hard. How do we do all of these things? How do we break every mold with, like, 10 people who have never done radio?”

“If you were to ask a different person, ‘What was the main goal of Vocalo?’, you might get six or 10 different answers,” said Luis Perez, a host and producer at Vocalo from 2007 until last year. “And they might all be true. … When [you’re] expected to upend every aspect of the thing you’re participating in, you’re going to fail.”

Malatia, now c.e.o. at Rhode Island Public Radio, said he sees Vocalo as “the right thing to have done” despite some of its struggles. “I think it’s a kind of experiment that needs to be performed more frequently in more places in media,” he said. “… No matter how much it varied from its original notion of internet-primary and broadcast-secondary, it got its audience, it found its audience. … [I]t’s kept them, it’s kept them loyal.”

Lessons from Vocalo also led to changes at WBEZ, Malatia said, including diversifying on-air voices. He believes that the community engagement initiative Curious City, now Hearken, “was born out of that concept of getting more community members involved in the product that was constructed and offered on air.”

Now Malatia sees Vocalo as “fundamentally a radio station,” he said. “It’s sort of gone back to where we didn’t want it to go, frankly. Which is okay. … It’s doing good work. It’s just that radio is primary again. And that’s okay.”

Rivera, who became managing director in 2010, said she was “put off by what was being produced” on Vocalo in its early years.

“It was very random programming,” she said. “Stories didn’t make any sense. They weren’t relevant to me. … It was just really silly, gimmicky things that just weren’t relevant.”

Rivera signed on after leading Radio Arte, a youth-driven Latino public radio station in Chicago. She worked to shift Vocalo’s focus to “traditional personality-driven programming” and to gradually increase the music mix as a “gateway” to communities and local conversations, she said.

Perez, who was at the station during the transition, said the changes made Vocalo sound more authentic.

“When I was on the air and I was sad, you could tell I was sad about something,” Perez said. “… You really felt like that was that person broadcasting. It wasn’t some painted-faced clown who was just going to shout into the microphone, try to tell jokes and be happy the way you might hear on an FM morning show or something.”

Rivera hasn’t completely dropped the original idea of working user-generated digital content into broadcasts. Vocalo encourages listeners to upload original music to its SoundCloud page and considers submissions for broadcast. It is also putting on storytelling workshops to involve the community with more direction, she said.

The low bar for submitting content to Vocalo before made it “the equivalent of cat videos,” Rivera said. “Now when we do these storytelling workshops, there’s some intentionality behind it, where we say we want to produce stories about people giving back or about some of the themes that we talk about on our shows.” Stories have included a young woman interviewing her grandfather about the Chicago record label he started in the 1960s, submissions from local black artists, and interviews with Chicago Public Schools teachers and a teachers’ union delegate during contract negotiations.

Vocalo is also exploring new ways to engage its audience, hosting a Halloween dance party for members and launching a crowd-funding campaign. In April, Vocalo raised over $28,000 on Kickstarter in anticipation of the signal boost earlier this year.

After six years leading the station, “it feels like … we have this platform that’s going to position us in a really great way,” Rivera said.