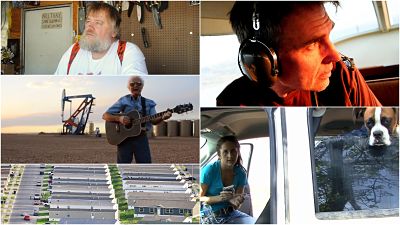 From roughnecks to singing cowboys and itinerant knife dealers, North Dakota’s oil boom has lured thousands to remote areas of the state to find their fortunes, and in the process became a fertile source of stories for an immersive yearlong multimedia reporting project.

“Black Gold Boom: How Oil Changed North Dakota” is produced by independent producer Todd Melby, a North Dakota native who was born about three-and-a-half hours from the boom’s epicenter, Williston, N.D. — named this year as the U.S. Census’s fastest-growing “micropolitan” area. He credits his sister who still lives in North Dakota as the inspiration for his project.

“She kept saying they’re drilling oil here now and things are so different, and you’ve got to come and see these man-camps,” Melby said. “So, I took her advice and headed off with only a vague idea of what’s going on there.”

His vague idea turned into one of the most widely distributed productions to date from Localore, the CPB-backed initiative experimenting with local multimedia production at public TV and radio stations. Prairie Public Broadcasting, the statewide pubcasting network covering North Dakota, is Melby’s partner in the production.

Melby and his wife, Diane Richard, co-founders of the Minnesota-based nonprofit audio production house 2 below zero, are collaborating on “Black Gold Boom,” along with a revolving crew that has included a pair of photographer/videographers and a reporting intern.

North Dakota’s oil field covers roughly 200 square miles of the state’s sparsely populated northwestern corner — or it did until energy companies began using hydraulic fracking and other new techniques to reach previously inaccessible pockets of oil and natural gas. To keep the oil flowing, energy companies have hired thousands of truck drivers, oil-rig workers dubbed “roughnecks” and other laborers who are paid six-figure salaries. People seeking oil jobs have flocked to the area, and a side economy of entrepreneurs and small businesses catering to the new workers has taken off.

“It’s definitely the modern-day gold rush — they want the big-money oil-field jobs,” Melby said. “The economy for working folks is so bad that people are flocking to North Dakota to get any kind of better-paying job they can get.”

Oil-field workers in Williams County, where Williston is located, earned an average of $99,000 a year, according to Melby, but round-the-clock work hours and availability of overtime can boost annual pay to some $140,000. Most, he said, pulled 80- to 90-hour workweeks to capitalize on overtime pay.

The once-small towns that dot the region were ill-prepared to provide basic amenities such as rental housing, grocery stores and even entertainment options.

In one “Black Gold Boom” story, Melby describes his first apartment in the oil fields. He rented a tiny unit in Bowbells, N.D., that lacked a kitchen and a bathroom in the unit but still commanded $1,100 per month in rent. Later, he found a basement for rent in Williston for the same price.

The housing shortage prompted some oil- field workers to move into ghost towns, bringing them back to life. Others live in the “man-camps” that Melby’s sister described with amazement. These prefab housing developments, which typically are subsidized by the energy companies for their workers, dot the prairie.

“That’s a colloquial term, ‘man-camp,’” Melby said. “The companies make sure to call them ‘crew camps,’ even though I don’t think I’ve actually seen any women living at one.”

This mix of infrastructure strain, quirky characters drawn to the boomtown atmosphere and workers seeking fortune or the means to just support their families has been a treasure trove of stories for Melby and his collaborators. In the last 11 months they have turned out 38 audio, video and multimedia stories — several of which have been picked up for national air by APM’s Marketplace and NPR’s All Things Considered and Tell Me More.

“Black Gold Boom” has featured interviews with the singing “Oil-Field Cowboy” and a trio of young Minnesotans who were drawn to North Dakota for the chance to make big money. They found themselves living in a tiny camper furnished with only three beds and a television.

In one story, Melby interviews “Bobcat” John, an Idaho man who sells knives to oil-field workers out of his truck. Called Bobcat because he used to have one as a pet —he now keeps a Canadian lynx — Bobcat John said he came to the oil fields because the workers had the disposable income to spend on his knives. A customer base had been hard to build in his home state.

Melby has also explored how the oil boom has affected those who already lived there and how towns have struggled to respond to the changes.

The most-watched online video from the series is “It’s a Scary Place for Women.” It features a 21-year-old waitress who moved to the area from Florida and who tells of how constant harassment from men from the oil fields prompted her to begin carrying a small arsenal of weapons — a pistol, eight-inch knife and a Taser — in her truck. The video racked up more than 12,000 views on YouTube and Vimeo.

A capstone production of “Black Gold Boom” is an interactive documentary highlighting the changes the boom has brought to the state, which will launch Jan. 7 as the Localore project nears its one-year anniversary. It is a personal narrative in which Melby contrasts the wide-open spaces and sparse traffic of the North Dakota of his childhood with the industrialization and sprawl of today’s oil fields.

He interviews a 15-year veteran of the Los Angeles Police Department who retired to Spearfish, S.D., to escape the hustle and bustle of Southern California. Bryan Johnson, the ex-cop turned fire-retardant–clothing salesman, travels regularly to the oil fields for business. With lines of big rigs, pickup trucks and SUVs creeping bumper-to-bumper behind him, he tells Melby that he’d never imagined that Los Angeles–style freeway traffic would come to North Dakota.

For Prairie Public Broadcasting, “Black Gold Boom” has delivered a precious resource — journalists reporting from a remote region on one of the biggest stories in the history of North Dakota. PPB’s closest newsroom in Bismarck is a four-hour drive from the oil fields.

“North Dakota is a huge state, geographically, and the boom is in a part of the state where we don’t have staff,” said Bill Thomas, director of radio. “It’s a huge story for our state, and having this has enabled us to get some serious, intimate coverage of the oil boom.”

Arbitron does not track radio audiences in the boom area, but Thomas has anecdotal evidence that “Black Gold Boom” has attracted new listeners and donors. He has heard from long-haul truckers who said they enjoy the series and are happy to have PPB as an listening alternative among the limited offerings on their radio dials.

Thomas recalled talking with a female truck driver who regularly travels into the boom area. “She told me, ‘I can name the next 10 songs coming up on the country station, so without you guys I’d be going crazy,’” Thomas said. “She thanked us and gave us a donation.”

“Public radio has always done well with people who are stuck in their vehicles for a long time, and thanks to the boom, there are lots of them,” Thomas said.

With the project’s Localore grant winding down at “Black Gold Boom’s” one-year mark, Melby and Prairie Public Broadcasting are working to find funding to keep it going.

“It’s been a great experience to be able to tell stories like [the one about] an itinerant knife dealer and have them be heard by a national audience,” Melby said. “This is what I like to do, tell stories of people living through it, and this has let me do that. And I’m hopeful we can continue doing it.”