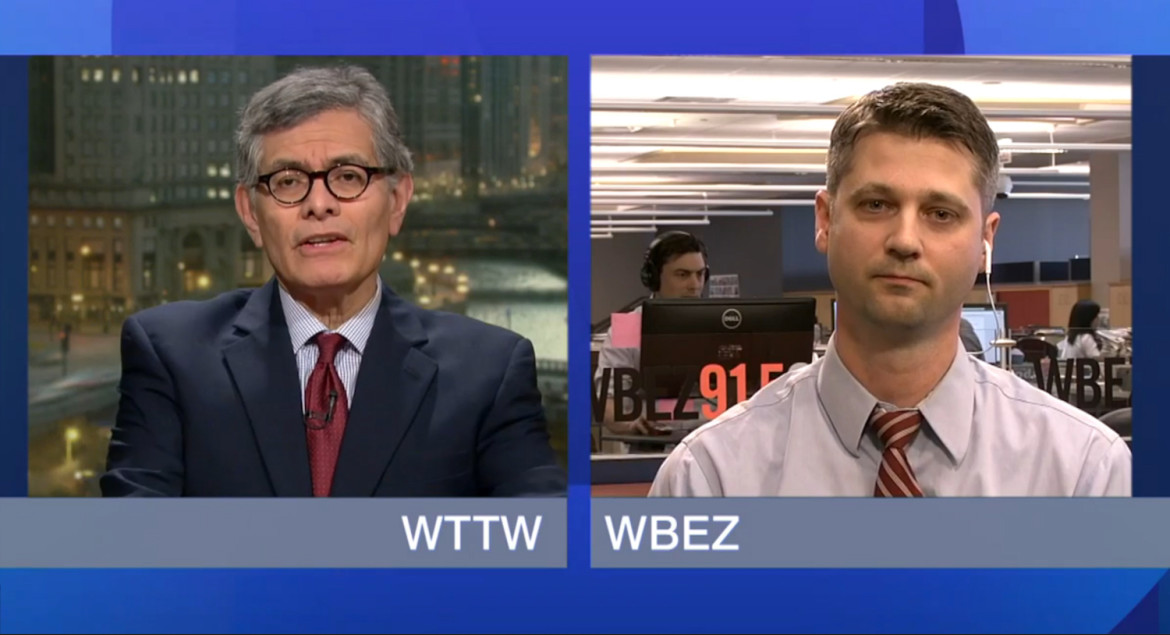 A robotic camera in WBEZ’s newsroom allows reporters such as Rob Wildeboer, right, to appear on Chicago Tonight, the public affairs program on WTTW-TV hosted by Phil Ponce, left.

Perhaps some of that standoffishness dates back to the Public Broadcasting Act of 1967, as WTTW President Dan Schmidt observed. “The Act was aimed at public television, and radio and TV were always considered separate,” he said. “And for years that worked, because we are separate media in many respects.”

“But, as we’ve now come to understand, we’re not just two legacy broadcasters,” Schmidt said. “We are both public media.”

In the final installment of our Currently Curious series about radio–TV collaboration, we look at public television and radio stations that operate under separate licensees in the same market and have forged successful partnerships. Part one of the series explored national partnerships between NPR and PBS, and part two reported on work between the media within joint licensees.

In each case, flexibility, patience and the ability to focus on the potential advantages of a partnership — and there are many — are vital to success. Yes, television and radio production approaches differ. “One newsroom doesn’t work with the same urgency as another, or even on the same schedule,” said Jim Schachter, v.p. for news at WNYC, which has also collaborated with NJTV.

But all agree the advantages outweigh the problems.

“Don’t look for the ‘no,’ but work toward the ‘yes,’” said Emily Donahue, director of journalism, sustainability and impact at KUT. “Focus more on the community service angle rather than production challenges.”

In Chicago, a suggestion from a trustee who served on the boards of both WTTW and WBEZ was the catalyst for the stations’ latest cooperative effort.

The stations already had a history of partnering up. Back in the 1990s they won awards for Chicago Matters, an annual series produced in collaboration with the Chicago Reporter newspaper, the city’s public library and the Chicago Community Trust. Each year the coverage focused on a specific problem confronting Chicagoans: violence, racism, aging and immigration policies.

Last summer WTTW Chair James Mabie proposed working with WBEZ on a more regular basis, said Ben Calhoun, WBEZ v.p. of content and programming. “That sparked the conversation about the practical first steps to build the infrastructure to support that,” he said.

A leadership change at WBEZ also gave the project a nudge, Schmidt said. Goli Sheikholeslami, who arrived as WBEZ’s c.e.o. in 2014, “is incredibly receptive to leveraging content,” he said.

Sheikholeslami, whose background is in digital media, “understands that the technology enables what is really important, which is sharing content,” Schmidt said.

The stations split the $50,000 cost of a robotic camera that connects the WBEZ newsroom at Navy Pier to WTTW on the city’s north side. That equipment upgrade, announced March 28, allows radio journalists to report live on Chicago Tonight during its 7 p.m. broadcast. A new high-speed fiber connection also lets WTTW hosts contribute to WBEZ broadcasts.

Schmidt envisions using the link in other ways, such as for editorial planning. “We can debrief each other on our work,” he said.

Calhoun noted that the collaboration makes each station more powerful. “If we combine viewership for their evening newsmagazine and listeners for our morning drive time, that’s about 250,000 people,” he said. “That provides a whole different proposition for approaching newsmakers, and for enriched engagement opportunities with a civic-minded audience. That really brings a lot of heft.”

“It’s a no-brainer to try and find ways to get our content across more platforms to reach more people,” Schmidt said.

Recently two WTTW staffers traveled in person to WBEZ “just to give a training session to our reporters about being on TV,” Calhoun said.

WTTW Correspondent Brandis Friedman put the radio journalists at ease: Talking to a camera still feels unnatural even to her, she admitted. “So I pretend there’s a little Phil Ponce inside the camera and I talk directly to him,” she said, referring to the longtime Chicago Tonight host. Friedman even calls him her “Little Phil.”

That advice may seem remedial to TV professionals, Calhoun said, but it was valuable insight for reporters used to working behind a mic, not a camera. “And it’s just that kind of generous exchange that makes me confident that this partnership will be a success.”

“Deeper journalism with a better reach”

The public media news landscape in New York City is similar to other major markets: The radio newsroom at WNYC has “heavily invested in reporting,” Schachter said, while WNET, the flagship public television station, has experienced producers but far fewer journalists.

So WNYC reporters “are always available to go on Channel 13’s MetroFocus show pretty much whenever they ask,” Schachter said, referring to the multiplatform magazine show that debuted in 2011. “And we’ve had conversations about doing other things over the years as well.”

One of those conversations has now progressed to a joint reporting proposal. WNYC’s On The Media and WNET’s NewsHour Weekend teams could soon join forces to examine issues related to poverty and how newsrooms cover it, Schachter said. Early plans include sending On The Media host Brooke Gladstone to report from the Republican National Convention in Cleveland this summer about how poverty affects the city and how local news organizations report on it.

“We hope those reports will land with some impact during the presidential campaign season,” Schachter said.

“In addition to contributing investigative reporting, we brought NJTV reporters on our air,” Schachter said. WNYC reporter Sarah Gonzalez also appeared on NJTV News with Mary Alice Williams, a weeknight series that airs at 6, 7:30 and 11 p.m. on NJTV, operated by WNET.

That approach is an “interesting and important form of collaboration,” Schachter said. “It’s addressing a topic of mutual concern with different news organizations throwing in together to try to get as big an audience as possible by sending reporters onto different platforms.”

Funders are also interested. “There’s a strong urge in the funder community to see more collaboration,” Schachter said. “When it’s done purposefully, it’s a great story to tell them.”

Stations that are looking to partner on a project need to go in expecting challenges. “It’s going to take longer, and there’ll be some friction,” simply due to differing work styles, Schachter said. “You’ll need to invest time in scheduling and getting news values aligned.”

If there weren’t a payoff, “it would feel like a burden,” he added. “So understand how working together will produce more in the way of deeper journalism with a better reach and greater impact. That’s the objective. And that’s important.”

Cooperation between KLRU-TV and KUT-FM began decades ago when the two were housed on the same floor in a building at the University of Texas at Austin.

Back then, joint projects took root as staffers ran across each other and pitched ideas. Over the years the stations have reported projects and co-produced mayoral debates, forums on transportation issues and Civic Summits, town hall–style discussions on public affairs.

KUT recently moved down the street, “so we don’t get to see them quite so often,” said Maury Sullivan, s.v.p. of community engagement at KLRU. “But we still have very similar ideologies about how we work and serve the community.”

Women wait for an early-morning bus to Austin at the Park & Ride in suburban Manor, Texas. KLRU-TV and KUT-FM looked at transportation challenges in their “Austin’s Eastern Frontier” series on rapid growth in the metro area. (Photo: Ilana Panich-Linsman)

And the shared work hasn’t slowed down a bit. Their most recent collaboration last year, with the local Austin Monitor newspaper, was “Austin’s Eastern Frontier,” a digital reporting project investigating the impact of explosive growth in the metro area. Stories focused on the city of Manor, 12 miles northeast of Austin, where the population has mushroomed more than 500 percent over 10 years.

“That is a part of the region that all three news organizations had overlooked,” said Allie Sandza, public affairs producer at KLRU, “so all of us liked the idea.”

They chose to report during the summer months, traditionally a slow news time, and publish in the fall. KUT took on radio and web work, KLRU produced video and the Monitor contributed text. Pieces delved into topics such as education, transportation, food and healthcare.

“We handled it as if we were all in one newsroom,” Sandza said. “We had traditional editorial meetings, and reporters all pitched stories. It worked out well. We hope to do more of that.”

The stations are also currently working on bringing TV programming to a wider radio audience. KUT airs an audio version of Overheard with Evan Smith, a KLRU public affairs interview program hosted by the Texas Tribune c.e.o. The stations have started working together to improve its repackaging for radio and expand its distribution, according to Sara Robertson, v.p. of production and technology at KLRU.

Next up, said Emily Donahue of KUT, is a joint project this summer to mark the 50th anniversary of the 1966 UT Tower shootings, America’s first mass murder on a college campus.

“Together, we produce something more powerful,” Donahue said.

Corrections: A previous version of this post reported that KLRU’s Overheard with Evan Smith was being reformatted to air on KUT. The program already airs on the station. A previous version also misstated that the Center for Investigative Reporting is part of Montclair State University. CIR is separate from the school.

2 thoughts on “TV and radio stations, working together? It’s possible — and potentially powerful”