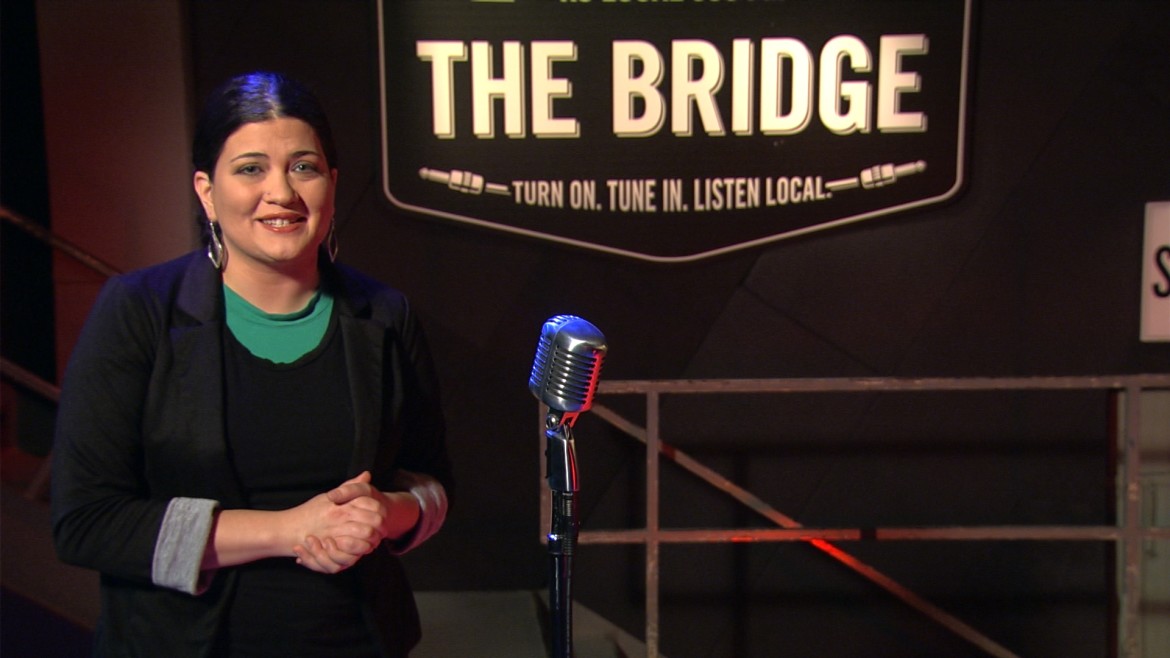 Bridge TV is KCPT’s TV series showcasing in-studio performances and interviews heard on KTBG, the Triple A radio station it acquired in 2013.

Bridge TV is KCPT’s TV series showcasing in-studio performances and interviews heard on KTBG, the Triple A radio station it acquired in 2013.

A joint licensee includes both a TV and radio station, making it one of the most obvious places in public media where collaboration between the two platforms could take root. But even with both kinds of stations under one roof, bringing them together still takes work.

, there were about 75 joint licensees in public media as of 2014. In the latest edition of our Currently Curious series about radio-TV collaboration, we spoke with leaders at three of these stations about how they encourage cross-media collaboration and the difficulties they’ve encountered.

Cleveland’s ideastream has long been at work breaking down its TV and radio silos. The organization was created in 2000 to unite PBS station WVIZ and NPR station WCPN under an umbrella organization. Since then it has grown to include a classical station and digital entities under the ideastream brand.

Each entity has a unique identity and history that requires balancing along with the ideastream brand, said Jerry Wareham, president. “That said, all elements of ideastream share a mission” to strengthen local communities by sharing technical, administrative and financial infrastructure and collaborating on community engagement through content development and combined production resources, he said.

One way ideastream has broken down distribution silos is by tasking staffers with creating content for multiple platforms. Content areas are defined by broad categories such as the economy or arts and culture, and teams create content for both radio and television. Some employees might be more comfortable with a particular platform, but everyone supports each other, Wareham said.

“It is true that you have to customize the content for the medium,” he said. “But those are crafting decisions. Our focus is service to the community in particular areas.”

Public media should go beyond thinking about just collaboration between television and radio, Wareham said, explaining that he prefers to call ideastream a “multiple media public service organization.”

“Simple collaboration between radio and television is not sufficient motivation, nor will it alone make a difference,” he said. “The work needs to be driven by a compelling mission-related priority.” Common commitment to that priority helps collaborators overcome barriers to success, he added.

Collaboration behind the scenes

“It’s called ‘joint licensee’ for a reason,” he told Current. In Culkeen’s view, the different platforms at a joint licensee should be “as close as possible.”

Illinois Public Media comprises a PBS station with three streams of programming, an NPR news/classical FM station and an all-news AM signal. The station’s editorial team thinks broadly about how to use all the platforms, especially for special projects, Culkeen said.

“When we do the design of the content for any project, we look at all the elements that we may be able to deliver that content on,” he said. “So a project is designed not only for television, it’s also designed for radio, new media and social media.”

For example, the station recently produced a 30-minute documentary about the history of Ebertfest, a major film festival in the community that was created by the late film critic Roger Ebert to celebrate under-recognized films. Though the show will air on TV, IPM’s radio team was also part of the planning process. An interview with Chaz Ebert, Ebert’s widow, aired on The 21st, the station’s new radio show. The newsroom also produced radio news stories on the festival.

Bringing together radio and TV can be very challenging behind the scenes. About five years ago, IPM began using the same broadcast management system for radio and television. Previously, the television station used ProTrack, and the radio department relied on an “Excel spreadsheet–type system,” according to Culkeen.

IPM is also working on an upgrade of its radio and television facilities to better align the stations, merging their audio systems using a Wheatstone broadcast audio board. The change will allow the TV station “to go live out of the studio and feed that to radio,” and vice versa, he said. The plan calls for phased-in upgrades to its radio studios, expected to be complete in 18 months. IPM is also planning a shared television studio with the College of Media at the University of Illinois, its licensee. The latter project has a completion timeline of 2018.

Making radio and television more compatible makes sense from an efficiency standpoint, Culkeen said. “We’re an analog house still, and we’re looking at redesigning it to become a fully functional digital house,” he said. “And by selecting boards that support each other both in the radio station and TV station, that will be more effective.”

Among joint licensees, KCPT is unusual. Unlike Illinois Public Media, which includes an NPR news station and a PBS station, the Kansas City station PBS station only recently became a radio operator. In 2013 it bought music and news station KTBG-FM and turned it into a Triple A station now called The Bridge. That same year KCPT also founded the Hale Journalism Center, which produces local coverage with journalists working across the platforms.

Since that expansion, KCPT has worked to bring together its various distribution arms. The TV and radio stations are cross-promoting each other. By promoting its TV programs on the radio, it “lets us talk to smart 25- to 35-year-olds,” said Kliff Kuehl, president of KCPT.

Cross-promoting “gets them in the tent,” he said, referring to The Bridge’s listeners. “It’s almost like a gateway drug. … We’re going to be doing more and more.”

Now that The Bridge is part of the public media music video site VuHaus, KCPT’s TV and digital arms are helping the radio station produce videos. The TV station also airs Bridge TV, an hour-long weekend program that highlights performances and interviews on the radio station.

The radio-TV cross-promotions began when Bridge TV launched in January 2015. In the last four months, the TV station has been trying to do more with cross-promotion on radio.

But the cross-promotions have to be carefully crafted.  “We don’t interrupt the music for a lot of chatter,” said Angee Simmons, v.p. of TV production & creative services at KCPT. “We are very conscious, when we do interrupt, that we remain respectful of the audience and make sure that it’s of true value to them.”

While Kuehl would like to see even more promotion of KCPT on The Bridge, he recognizes there are limits. To protect the station’s music format, programmers of The Bridge want to limit the talk, he said. But “I need to find a balance.”

Uprooting a radio station, which KCPT bought from University of Central Missouri, and integrating it into the larger organization hasn’t been easy. “We think of it like an organ transplant,” Kuehl said. “We want to accept that organ, and we need [it] to accept us.”

Different platforms have their own rhythms, Kuehl said, and The Bridge’s staff of four full-timers is far smaller than KCPT’s workforce of 55 employees. “You have a daily grind,” he said. “Then we tell our teams, ‘Now go meet a bunch and figure out this new project.’ That does make it kind of tough.”

Regardless, Kuehl described radio station as having a positive influence on KCPT. “As a public television manager, it was eye-opening in terms of looking at the mindset of the Triple A managers,” he said. That attitude can be summed up as “live, local, and authentic,” he added.

Kuehl said KCPT is now in the midst of an internal audit to look at “how we’re working together,”, and is striving to get its v.p.s of radio and TV more closely in sync.

One thought on “Joint licensees breaking down TV, radio barriers”