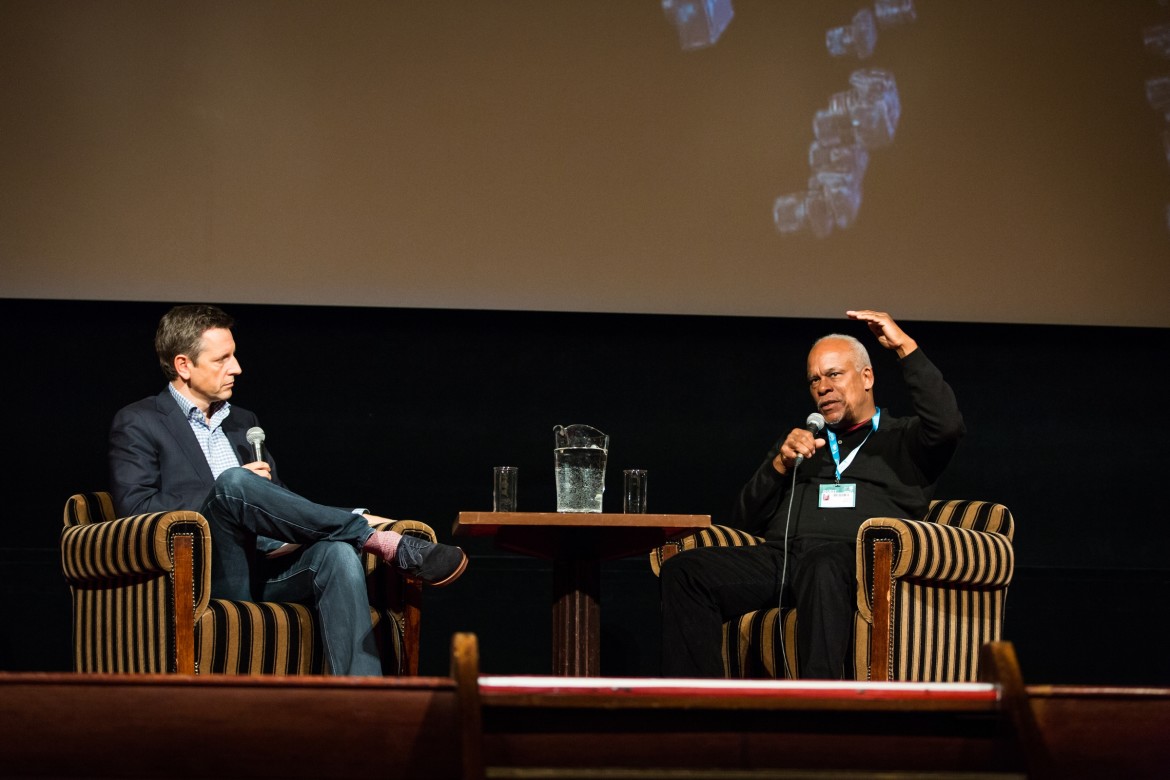 The International Documentary Film Festival Amsterdam has become increasingly important for U.S.–based public media. Producers and filmmakers from PBS’s creative documentary strands come to make deals and make friends, showcase new work and get inspired by the state of the art.

This year’s IDFA, Nov. 18–29, was a meeting ground for 3,271 documentary professionals from 93 countries, including producers from Independent Lens, Frontline, POV and American Masters, and executives representing PBS, New York’s WNET and the World Channel based at Boston’s WGBH.

They sought co-financing and co-production partners at the IDFA Forum; shared their visions for the future of documentary storytelling at DocLab, a conference and exhibition focused on interactive media; and bought and sold films in the Docs for Sale marketplace. They also participated in dozens of panel discussions, Q&As with filmmakers and industry leaders, workshops and social events.

POV executive producer Chris White was tracking new talent in Amsterdam. “IDFA is a place to connect with filmmakers who might not be on our radar, who haven’t submitted to POV through our open call or who are just breaking into the industry,” he said.

Director Stanley Nelson came to IDFA to present The Black Panthers: Vanguard of the Revolution, debuting on PBS’s Independent Lens in February. He also served on the jury for mid-length films and looked for international partners for a film about the Atlantic slave trade.

“There’s nothing like it in the U.S., with this many documentary filmmakers from around the world,” Nelson said. “You see films you would not see in the U.S.” His jury gave the 10,000-euro prize (about $10,996) to Denmark’s At Home in the World by Andreas Koefoed, about a class of children, ages 10–12, in a school for asylum-seekers.

IDFA veteran Klara Grunning-Harris, a commissioning editor at the Swedish Film Institute who worked for ITVS for 11 years, described IDFA as a mecca for international documentary. “It’s definitely one of the best places to launch a project in development or a newly completed film,” she said.

Along with its industry focus, IDFA is the largest documentary film festival in the world. This year, filmgoers bought more than 255,000 tickets for 319 films screened in world-class theaters.

These screenings play an important role in the business that gets done at IDFA, according to Nelson. “Buyers and commissioners see a film with an audience and not looking at it on their laptops while on a train or eating breakfast,” he said. During a Q&A that followed a screening of The Black Panthers, Nelson said audiences are responding to the documentary because “police violence has become so prominent, such a relevant issue in the U.S.”

With ITVS’s multilayered involvement in funding and presenting documentaries on American public television, its films were all over IDFA. In addition to Nelson’s The Black Panthers, another ITVS-funded film, Welcome to Leith, was featured at the festival with an extended Q&A with co-director Christopher Walker. The documentary follows a North Dakota community’s response to an invasion of neo-Nazis and is also slated for Independent Lens.

Best of Enemies, on the TV debates of Gore Vidal and William Buckley in 1968, was selected for a special track of the film festival, the “Masters” series. Co-directed by Academy Award–winner Morgan Neville (Twenty Feet from Stardom), the ITVS co-production, also headed for Independent Lens, is one of 15 documentary features shortlisted for an Oscar this year.

Other ITVS-funded films featured at IDFA included: In Jackson Heights, Frederick Wiseman’s 40th documentary, an epic celebration of diversity and democracy in Queens N.Y.; Thank You For Playing, David Osit and Malika Zouhali-Worrall’s film on the emotional journey of a family whose young child has cancer, slated for POV’s 2016 season; and A Young Patriot by Du Haibin, which will run on the World Channel.

Independent Lens has counted on IDFA to drive international interest in its new films and projects in development. “Most of the projects we’ve pitched have received additional co-production support as a result,” said Lois Vossen, e.p. For example, both India’s Daughter by Leslie Udwin, which debuted on PBS last month, and True Conviction by Jamie Meltzer, scheduled for a 2016 premiere, were featured in the Forum at previous festivals.

This year, Vossen and director Hao Wu pitched People’s Republic of Desires to broadcasters and film foundations. It was one of 17 projects selected out of 600 Forum submissions for a “Central Pitch” held before a roundtable of 25 commissioning editors and an audience of 300. With development financing from ITVS and Sundance Institute, the film was seeking $369,697, out of a production budget of $513,772.

Afterwards, Vossen said she was pleased by the response. “They saw the relevance around the world,” she said. Director Hao Wu said he found enthusiasm for the project in follow-up meetings over the next two days with broadcasters, including France’s ARTE, Denmark’s DR and the BBC. Netflix also expressed interest.

American Masters at the Forum

Seeking $423,346 out of a production budget of $973,146, Koch told broadcasters the film would put “Sammy Davis Jr. in the context of the place, the time and the social upheavals.” Commissioners for the BBC, ARTE France, Dutch broadcaster VPRO, Norway’s NRK, and Japan’s WoWoW applauded the trailer and expressed strong interest in the film. Kantor, e.p. of the WNET-produced series, said afterwards that he was confident the film will find “a broad and diverse audience around the world.”

Koch, who has been representing PBS and WGBH in international film markets for more than 20 years, described IDFA as “a central piece to our sales and acquisitions activities.”

PBS Distribution has been “represented at IDFA for 18 years,” Koch said. “We have successfully sourced, pitched, bought and sold programs to global broadcasters and from producers at every IDFA festival.”

With Harris in Amsterdam, Frontline had a presence at IDFA for the first time this year. “IDFA is so important,” said Raney Aronson-Rath, Frontline e.p., “because it brings together those who are pioneering and experimenting in new forms to think creatively about the future of media.”

At the Forum, Harris found that “more and more filmmakers are open to thinking of their documentary projects in a number of different forms — long, short, digital, TV — and I had some encouraging conversations about where Frontline could fit in that equation.”

Since Harris is new to Frontline, IDFA was an opportunity for her to meet people from PBS and other major series. Harris described this year’s IDFA “as a coming-of-age moment for the various documentary programs on public television in America,” a moment “to learn that we all share a lot of the same goals and want our programs to have an impact on a global stage.”

Harris first attended IDFA DocLab in 2012 to present an interactive story she made for the New York Times, and she described that experience as profound. “It was amazing seeing projects from all over the world and knowing that there was a global community thinking about documentary in the digital space that I wasn’t aware of,” she said. “. . . I was inspired to do more nonlinear work. I decided then that I was coming every year.”

At this year’s DocLab, Harris was impressed by the virtual reality projects: “It was really inspiring to meet creators from Israel, Australia and the U.S. who were pushing the limits and trying to figure out how to tell stories in innovative ways.”

Along with the more than 300 DocLab Interactive Conference participants, Harris applauded Bianca Giaever’s improvisational Videos 4 You, featured on This American Life’s YouTube channel. Giaever described her work as “audio-driven video,” visualized in postproduction and realized in collaboration with her subjects.

For one of her TAL projects, Giaver used an open invitation on social media — “Need help with something you want to say?” — to find a Valentine’s Day story. She co-created the video with its subject, Maia, who had not said “I love you” to her boyfriend once in an eight-year relationship.

William Uricchio, founder of the MIT Open Documentary Lab and a leader in IDFA DocLab since it was launched in 2007, helped put Giaever’s collaboration with Maia in the context of DocLab’s celebration of immersive, interactive experiments. In his talk, he emphasized the interest in “co-creation,” the process of involving your subjects in the creative process, an approach that cut across many of the boundary-breaking projects presented at the conference.

Watch the trailer for At Home in the World:

Watch the trailer for Best of Enemies:

Larry Kirkman is Dean Emeritus at American University’s School of Communication, where he teaches courses on social documentary and the history of cinematic arts for filmmakers pursuing graduate degrees. He also works with specialized centers within the school, including the Investigative Reporting Workshop and the Center for Media and Social Impact. Kirkman facilitated the university’s 2010-11 acquisition of Current as an independent journalism center.