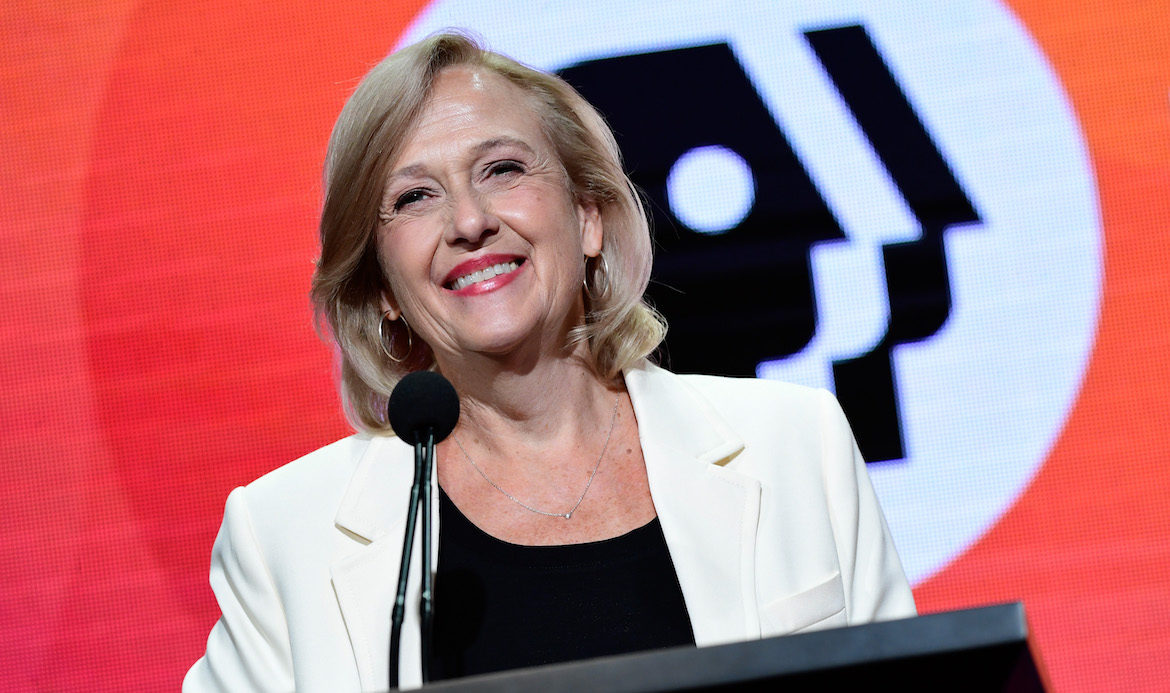 Kerger announced Monday during a press conference at the Television Critics’ Association Summer Press Tour that she had renewed her contract. PBS also revealed its deal to provide feeds of local station broadcasts to YouTube TV’s live streaming subscribers.

Kerger is enthusiastic about the digital expansion that’s underway in public television, she said during her executive session with TV critics, and recognizes that the continual process of change management will be easier to navigate with stable leadership at PBS.

“I believe so strongly in the purpose and the power of public television, in content that makes a difference in people’s lives, in the conversations that bring people together and the programs and resources that prepare our youngest learners for success,” Kerger told TV writers. “I believe that our work has never been more important, and I’m excited about what lies ahead.”

Over the next five years, Kerger wants to continue building a solid foundation for public television in the world of digital media.

The history of public television’s early years are rife with stories about spirited efforts to get stations on the air, she told critics. Today, the challenges are just as exciting.

“We’re at a time of great experimentation,” Kerger said. “In terms of the platforms and the formats — this is not a time for the faint of heart. If you feel like you need everything mapped out, you definitely shouldn’t be in media, and you certainly shouldn’t be in public media.”

Kerger’s presidency at PBS began in 2006, and she said she believes her long experience in the job can help provide the continuity and stability needed to guide an association of independent stations further along the path of digital reinvention. Her close work with stations over the years has built a level of trust as PBS and its members move into “a very strange and wonderful but very complicated environment,” she said.

Yet the decision to renew her contract wasn’t an easy one, she said in a reply to a question from Current. “You always wrestle with the question, ‘How long is long enough?’” she said. “We all look at people that have stayed and done the same thing for too long.”

Even she’s surprised by her longevity, Kerger said. “I thought when I took this job originally that … I would stay five years, maybe,” she said. “And here I am these many years later. … I don’t know if that’s sort of a dubious accomplishment.”

Kerger promised that PBS will announce deals with additional over-the-top streaming providers but would not say which will follow YouTube TV. “We are talking to a lot of people,” she said. “Our goal is to have content in multiple places. … YouTube is just the first.”

Earlier this year, Sling TV was among the virtual multichannel programming distributors that PBS was considering. AT&T’s DirecTV Now and Sony’s PlayStation Vue have told PBS they aren’t interested in offering PBS streams, according to Ira Rubenstein, chief digital and marketing officer.

In negotiations with all vMVPD services, PBS will insist that digital platform subscribers receive streams of local stations’ over-the-air programming. Under the YouTube TV agreement, stations have three options for delivering streams.

“We are harder to work with than other media organizations because my interest is not just to put PBS up there,” Kerger said. “I want to put our local stations there. I want to make sure that what people are seeing in communities reflects not only the great content that we are providing, but also the great content that the stations are providing.”

Kerger acknowledged that PBS’ demand for localized live streams is hard for some “skinny bundle” providers to accept.  “That causes some of our partners to swallow deep,” she said. “They ask, ‘Can’t you just give us one feed and we’ll be done with it?’

With YouTube TV, she said, “we worked and worked and the result is they are going to pick up all of the public television stations in every community. And I think it’s a great partnership.”

When a critic asked about the Trump administration’s proposal to eliminate CPB’s federal funding, Kerger acknowledged disappointment about one aspect of her role as PBS president. Public broadcasting enjoys widespread bipartisan support on Capitol Hill, she said, but the White House’s persistence in trying to eliminate CPB’s $445 million appropriation requires that she and other pubcasting leaders spend significant energy advocating to preserve the funds.

“I stand alongside our stations on visits up to the Hill to try to make the case,” Kerger said. “But it takes time and energy to do that, and this is time and energy that is taken away from investment in creating content, building relationships with communities and organizations, working in schools, all the other stuff that we do.”

Federal funding amounts to about 15% of overall system revenue for public broadcasting, she said, but stations in smaller and rural communities rely on CPB grants to maintain their services.

“This isn’t an issue about Big Bird being unemployed,” she said. “It’s really an issue about the health and vitality of communities in which local television access plays an outsized role.”

Public television must build revenues from private sources that are the largest source of funding for stations and public media as a whole. “We simply couldn’t do our work without the generosity of individuals and organizations,” Kerger said. PBS will be “even more deliberate in tapping into philanthropy to fuel our work,” she said. “My top priority, working closely with our 335 member stations, is to ensure that public television and the mission we represent is there for the next generation.”

In highlights of sessions on programs airing this fall and beyond:

Frontline devoted its Tuesday session to For Sama, a documentary by Waad al-Kateab about her life during five years of Syrian bombardment. The film covers a time when al-Kateab fell in love, got married and gave birth to a daughter. For Sama won top awards at the Cannes Film Festival, Hot Docs and the South by Southwest Film Festival.

“We’ve never even had a film a documentary at Cannes before, so it was a really unbelievable experience for all of us,” said Raney Aronson-Rath, Frontline EP. The documentary is in theatrical release prior to its PBS premiere and recently opened in New York City, Los Angeles and San Francisco.

Viking Cruises renewed its sponsorship of Masterpiece through 2021, the year when the series celebrates its 50th anniversary, said EP Rebecca Eaton.

The corporate sponsorship will help support production of World on Fire, a sprawling World War II drama that follows the stories of characters from the United States, France, Great Britain, Poland and Germany. The BBC co-production is led by Mammoth Screen, which previously made Victoria, Poldark and Endeavour. The first season of seven episodes will start next year.

Henry Louis Gates Jr. described the evolution of Finding Your Roots, the popular genealogy series that launches its sixth season Oct. 8. The first version of the show debuted on PBS in 2006 as African American Lives and focused on the ancestry of prominent black Americans. Feedback from a viewer prompted Gates to rethink his approach after a second season aired in 2008.

“I got a letter … that changed my life and changed the series,” Gates said. “It was from a woman who said she’d always admired my stances on cultural pluralism and diversity. But [she] decided I was a big, fat racist because I didn’t do white people.”

Producers revamped the series to present genealogical research on people of other races and renamed it Faces of America. Later, the title changed to Finding Your Roots. So far, Gates said, more than 200 guests have appeared in all three versions of the series.

Edward James Olmos was clearly moved when he spoke on an American Masters panel about Raúl Juliá: The World’s a Stage, to be telecast Sept. 13. Juliá, a multifaceted Puerto Rican actor, performed on and off-Broadway and in numerous feature film and television roles, including on Sesame Street.

“He died never receiving an accolade,” Olmos said of Juliá, who had a stroke and died in 1994 at age 54. “He was nominated but never received one. I received his Golden Globe (posthumously) for Burning Season.” Juliá also received posthumously an Emmy and a SAG Award for his work in that film.

“I’m emotional right now because it’s been 25 years and this is the first time we’re talking about him,” Olmos said.

Experts who discussed McCarthy, a two-hour American Experience documentary that premieres Jan. 7, concluded that many who now use the word “McCarthyism” do so incorrectly.

“It’s become sort of a pejorative,” said David M. Oshinsky, whose book is the basis for the documentary. “If you are in the environmental movement and people are killing trees, you’ll call that person a ‘McCarthyite.’ It’s used by every single group to single out people they really do not like. What it really is supposed to mean is the irresponsible smearing of innocent people. I think probably it has become too widely used.”