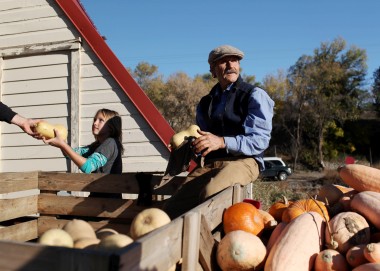 For a Localore project hosted by a community radio station in western Colorado, Julia Kumari Drapkin set out to invert the traditional model of science reporting.

As a reporter for news outlets such as PRI’s The World and for the environmental organization The Nature Conservancy, and as a former fellow at the Metcalf Institute for Marine and Environmental Reporting, Drapkin is well-steeped in the slow, reactive practices of most science reporting: review a scientist’s newly published research, interview the scientist about the findings and then, if time allows, interview people about how the study affects them.

The Paonia audience for I See Change is made up of many farmers, coal miners and others whose occupations make them intimately familiar with the environment. They are encouraged to share their personally recorded climate data on The Almanac. (Photo: Julia Kumari Drapkin)

Drapkin wanted to begin by communicating with the people who are most affected by science reporting, and she devised a new approach to pitch to the Localore initiative launched by the Association of Independents in Radio in 2011 to test new approaches for creating locally produced public media. In Drapkin’s experimental model, people would ask questions about environmental phenomena they observed, and she would discover the answers by talking with scientists.

Localore approved her proposal, which became I See Change, and paired her with KVNF, a community radio station licensed to the town of Paonia, Colo. (population: 1,500). KVNF broadcasts across 10,000 square miles with two transmitters and seven translators, but it serves the smallest community of any of the 10 Localore host stations. It’s also one of only two Localore projects based in rural communities — the other, Todd Melby’s Black Gold Boom, is produced in North Dakota.

Listeners interact with I See Change in several ways. As Drapkin envisioned, they pose questions about environmental oddities in and around Paonia, from the early blooming of flowers to the massive drought that plagued the West in 2012. Drapkin takes their questions to scientists at environmental institutes such as the Rocky Mountain Biological Laboratory in Gothic, Colo., and the Sierra Nevada Institute at the University of California–Merced. The resulting stories air on KVNF.

But I See Change also collects citizen-reported climate data and publishes it within the context of scientific studies, a tactic that helps to marry qualitative and quantitative data, allowing even its most skeptical participants to arrive at useful conclusions based on their own findings.

“We don’t have to say that there’s definitely a relationship, but we can at least put the two things next to each other,” Drapkin said, adding that the observational method of crowdsourcing connects with the public better than lectures do. “Americans don’t want to be told that ‘This is climate change, and you have to do X.’”

Recently KVNF added a weekly “Change Cast” segment to its on-air news reports, providing airtime for Drapkin to share the latest stories from the project. She’s also co-hosted occasional live programs along with a local scientist. Michael Soule, the father of conservation biology and a Paonia resident, is a frequent guest.

The conversation continues off the air, too, thanks to a massive online “community climate journal” that makes up the bulk of the I See Change project. The Almanac, as it’s called, is a crowdsourced hub of user-submitted climate info, charting the weather patterns of individual weeks of the year as well as for the seasons at large. Users upload their observations, along with photos and video, and their findings are recorded for comparison with past and future years.

KVNF General Manager Sally Kane, who has lived in western Colorado her entire life and whose family helped found the station, jumped at the opportunity to house the Localore project.

“It is a source of pride for people that we were able to market our station to a nationally funded project and that we were successful in attracting a multimedia producer here,” Kane said. “In general I think that the [public media] system doesn’t place a high enough value on the contributions that rural stations are making and can make.”

Many of Drapkin’s listeners don’t believe in man-made climate change, but Drapkin says they still “have really smart questions about it.” (Photo: Julia Kumari Drapkin)

With a small budget and a full-time staff of only eight employees, KVNF wasn’t able to provide much financial or editorial assistance to I See Change, but it did match Localore’s $107,000 grant with in-kind contributions. To get The Almanac up and running, Drapkin recruited a four-person digital team to work together remotely from Paonia, Boston and New Orleans. Drapkin also has two editorial advisers for the project.

Although unexpected design challenges delayed the website’s launch until January 2013, I See Change has cultivated a small but loyal online following. Among the listeners who responded to Drapkin’s invitation to text in their weather observations: the local fire chief, who used the service to report suspect blaze patterns. Then when The Almanac went live, local participants began to dig through their personal journals and upload the climate data they’d recorded in months and years past. The site received more than 500 postings after its first two weeks.

The decision to launch I See Change at KNVF was key to Drapkin’s ability to build connections between the project and various community interests. The station’s listenership includes farmers, ranchers and coal miners who, when it rains, put a sign outside their church reading “Dear God, Thanks for the Moisture.”

It’s also a region where many people are skeptical about whether climate change is caused by human activity. Early in working on the project, Drapkin learned that many townspeople were already keeping climate journals and had questions about their own findings that they wanted to ask scientists.

“People who don’t believe in climate change have really smart questions about it,” Drapkin said. “The idea that they’re anti-science is ridiculous.”

Kane acknowledged that she was initially concerned about the project’s reliance on texting and social media to engage KVNF’s audience. “I just wasn’t sure how much that would take off,” she said.  Yet residents have quickly adapted to The Almanac’s system, something Kane attributes both to the interests of newer residents and the tenacity of Drapkin’s pursuit of the “old-timers.”

“People who are new to the area are the catalysts, they’re the change-makers,” Kane said. And people who have been established here for a very long time don’t tend to step up into those kinds of roles — you have to go find them. And that’s what Julia did.”

Drapkin’s interest in environmental reporting stems from firsthand experience with nature’s wrath. She grew up in Clearwater, Fla., just off the Gulf Coast. “I remember the first no-name storm that took out my house,” she said.

In 2004 Drapkin reported on the Asian tsunami out of Sri Lanka for the Associated Press, then moved to New Orleans. She enrolled in Columbia University’s journalism school just before Hurricane Katrina hit her home.

Her father had been a denier of climate change until Drapkin began sharing the local evidence with him — she sent him stories reporting on climate change’s effects on the Florida Gulf Coast, where he still lives. His more cautious reaction gave Drapkin a crucial insight: People are more receptive to environmental reporting when they recognize how it affects their everyday lives.

Drapkin shared this thought during a Feb. 6 seminar hosted by Resources for the Future, an environmental research nonprofit based in Washington, D.C. Afterwards she was swarmed by the public-science workers in the audience. Such workers have expressed interest in I See Change, as well as others in public media, and Kane and Drapkin hope to leverage that interest into greater financial support for the project.

This will be crucial to the project’s survival. Like the other Localore projects co-produced by AIR, I See Change must secure additional funding by March, when its initial grant expires, if it is to continue. Kane is optimistic that it can extend past its first year.

Drapkin is preparing to phase herself out of the day-to-day operations of I See Change and move back to New Orleans by the end of the year. But she hopes to secure enough funding to expand The Almanac to at least two more stations in the Rocky Mountains. And, as a final pièce de résistance in Paonia, Drapkin wants to tackle what she calls “the big, big questions,” such as whether climate change is in fact man-made.

“I do have faith that this is not the end of the story,” Drapkin said. “People literally stop me on the street and say, ‘I see change!’”