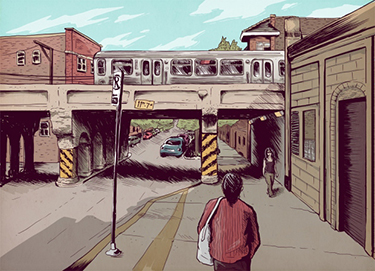 Jennifer Brandel was a general-assignment reporter for WBEZ in Chicago when she pitched her idea for a participatory local journalism project to the Association of Independents in Radio’s Localore initiative in March.

“I was a little bit of a square peg in a round hole,” Brandel said of working the general-assignment beat. “It just didn’t feel like there was a job that I could apply for that would uniquely be for me.” So she pitched Curious City: Let’s Get Answers as a project for telling local stories collaboratively by appealing to listeners for coverage ideas.

AIR eventually awarded $100,000 to WBEZ and Brandel for Curious City; the station matched the grant money with $100,000 in in-kind support for the CPB-backed initiative.

The cross-platform project taps the curiosity of WBEZ listeners, who can participate in several ways: by posing questions about any aspect of life or history unique to Chicago, reacting and interacting on a comment board, and voting on anywhere from two to five questions selected as finalists for that week’s “investigation.” Listeners’ questions  generally spring from the realm of human interest and have ranged from rumors of underground tunnels used by mobster Al Capone to how city workers clean Cloud Gate,  a 12-foot-high steel “bean” structure that is a popular tourist attraction in Millennium Park.

About a dozen questions are posted on the site every week, and the Curious City team chooses among them to select the finalists that are put up for online voting. Brandel compared the process to making a mixtape, a process that involves considerations of variety and the appropriate balance of lighthearted and serious questions.

Once votes have determined the week’s top question, the Curious City team researches and reports the answer in one of a variety of formats: audio, video or other multimedia (including comics). The listener who proposed the question also plays a role in the process: Curious City reporters follow up with the questioner to make sure they’re pursuing the investigation to his or her satisfaction.

The stories aren’t produced on hard deadlines, but reporters put out a steady stream of material for the Curious City segment that airs Wednesday afternoons on WBEZ. Each weekly appearance typically covers one question and one answer; sometimes an answer will spark a flurry of questions on the same topic. An investigation into biodiversity, for example, prompted more questions about animal life in Chicago.

Brandel, who is the project leader, has reported many stories herself. She leads a small team of one editor and one intern and works with freelancers and other general-assignment reporters on individual stories. To date, 35 reporters have worked on 38 Curious City stories.

Because Curious City puts a different twist on the concept of crowdsourcing, Brandel wasn’t sure how listeners would react to it. “We never totally set an expectation. We were just like, ‘If five people ask questions and there are five good questions, that’s enough to do five good stories,’” Brandel said.

Though AIR won’t reveal website metrics for Localore projects until piloting concludes, Curious City’s resonance with online users is obvious from the frequency of posts on its comments board. More than 11,000 votes have been cast for questions to date. The site also has a low bounce rate of less than 6 percent, indicating that visitors come to the site intending to explore the content.

Jennifer Brandel, the lead producer for Curious City, sometimes takes on questions herself. When a listener asked what was at the bottom of the Chicago River, Brandel kayaked down the river with an underwater camera to find out. (Photo: Jennifer Brandel)

Responses to some unusual investigations have also demonstrated high levels of engagement. One of the most ambitious reporting assignments explored the evolution of the Chicago accent. To chase down the answer, Curious City invited listeners to call and record voicemails so that a local linguist could explain the nuances of how Chicagoans sound when they talk. More than 300 listeners submitted recordings in two days.

Curious City was one of three proposals that WBEZ submitted for Localore, according to Torey Malatia, c.e.o. of Chicago Public Media. Each proposal had to have potential for long-term viability as an activity that could be integrated into the station’s newsgathering operation.

“From the get-go, we didn’t even apply for things that we wanted to be a temporary experiment,” Malatia said. “We always had the intention of building [the project] into what we do.”

WBEZ intends to continue Curious City — “everything, including the brand,” Malatia said — once Localore’s involvement in field production winds down in March 2013. Malatia hopes to extend the concept of community involvement in reporting to more “hard news” topics, such as the recent Chicago teachers’ strike.

With the Curious City format, WBEZ could poll listeners about the city’s public education system, for example, and the news team could develop coverage around respondents’ interests.

Even though Curious City isn’t covering hard-hitting news, reporters in WBEZ’s newsroom have embraced the project, according to Malatia.

“No one [on staff] actually says, ‘Damn, gotta do another Curious City,’” he said. “They look forward to it. They hope they can be part of it. They enjoy it immensely.”

Curious City has the potential to expand to other stations. Brandel and her team are exploring the feasibility of marketing their web platform as a turnkey service to other public media stations to allow them to adopt Curious City in their own newsrooms.