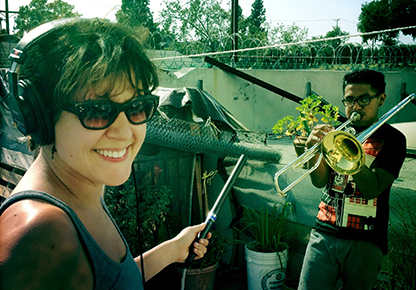 It’s hard to make an experimental public radio project stand out from the crowd, especially in a media-saturated city like Los Angeles. So producers of KCRW’s Sonic Trace decided to create their show inside a bubble.

That bubble is a literal one – a metallic, silver, soundproof contraption, about eight feet tall and four feet wide, with a cushy pink interior. It’s called La Burbuja, and it serves as the project’s mobile recording booth.

La Burbuja can be dismantled and reinstalled in a matter of hours, but the team working with the Santa Monica–based station leaves it in public establishments for several weeks at a time, where interested parties can find it and step inside to record their own stories. In January it was installed in a church in south L.A., where the team recorded stories of immigrants from Guatemala and El Salvador. This month it will spend two weeks parked next to a stationary produce truck.

Sonic Trace seeks to record stories from southern California’s Latino immigrant communities, documenting the many and varied paths they take to get to the City of Angels. Inside the cozy La Burbuja, the stories recounted are built around three central questions: Why did you leave your first home? Why did you stay here? And if you go back home, what makes you return?

The project was launched and funded in its first year as a co-production with the Association of Independents in Radio’s Localore initiative. It is the brainchild of former Radio Diaries producer Anayansi Diaz-Cortes and her husband, photographer-producer Eric Pearse-Chávez. Diaz-Cortes, a Mexico City native who grew up in Miami and formerly worked in New York, had only visited L.A. once — and hated it — prior to pitching Sonic Trace as a Localore project.

Despite her initial negative reaction to Los Angeles, Diaz-Cortes was drawn to the region’s sizeable population of Mexicans (the highest outside of Mexico City) and intrigued by the idea of exploring local stories from a global perspective.

“You cannot talk about any American city at a local level anymore without going beyond borders. How are you going to cover any community locally if you don’t look at it with a global scope and with international stories?” Diaz-Cortes said.

This philosophy fueled her ambition to make Sonic Trace globally focused by reporting on both sides of the U.S.-Mexican border. She embarked on two trips to southern Mexico to flesh out reporting on stories such as “Tavehua, Los Angeles & Tavehua, Oaxaca,” about the exodus of a large number of residents of Mexico’s Oaxaca region to L.A.’s Koreatown.

To fully immerse themselves in the neighborhood that had become their primary area of focus, Diaz-Cortes and Pearse-Chávez moved to an apartment in the heart of Koreatown. They split their workweeks between KCRW’s studios in Santa Monica and NPR West in Culver City, Calif.

To drum up attention for the project and excite Angelenos about sharing their stories, the Sonic Trace team knew they needed a visual hook – something that would catch the eyes of passersby.

They ultimately decided to hold an open design contest among local engineers, designers and architects to create the portable sound booth. Out of some 30 entries submitted in May 2012, architects Hugo Martinez and Christin To — both immigrants themselves — delivered the winning bubble. Martinez is from Michoacan, Mexico, and To from China via Germany.

To raise funds to build La Burbuja, Sonic Trace turned to Kickstarter in August 2012, successfully surpassing its $5,000 campaign goal by more than $2,500. Currently producers are applying for grants to replace Localore’s funding, which ends in March at the project’s one-year mark.

Localore provides $109,750 for production of Sonic Trace, and KCRW is paying $25,000 to Localore to offset AIR’s administrative support fees. The station also provides in-kind contributions with interns, studio space, overhead costs and other support. Diaz-Cortes and her co-producer make a combined salary of $65,000, with AIR providing an additional $44,050 for travel and to compensate the small network of Sonic Trace contributors, which includes Emmy Award–winning videographer Carmen Vidal. Diaz-Cortes pays for additional expenses out of her own salary, she said.

“We end up coming out in zeroes, basically. I think it’s great for year one, just the foundation, but it was a struggle,” Diaz-Cortes said.

By the end of its first year, Sonic Trace will have put nearly 20 pieces on the radio: seven documentaries, two interstitial spots and features produced from stories recorded in La Burbuja. Raising awareness of the project has been a challenge, even with the publicity surrounding La Burbuja’s design. When stories are posted on the Internet, the benefits of sharing them are less obvious to potential participants.

“My dad doesn’t know what the hell I do,” Diaz-Cortes said. “It’s so vague and kind of abstract to the Latino community.”

Her engagement strategy has consisted of “going over the parents to get to their teenagers” — reaching out to the children of immigrants, a younger generation that’s more comfortable with digital technology and more likely to be aware of KCRW and the Internet.

The project heads hope the launch of their redesigned website will bring more recognition and engagement. The site is slated to feature a searchable map pinpointing locations of all the online stories. Web visitors will be able to record their own stories and upload them to the map from their own computers. The site was designed as a tool for finding and sharing stories.

Launch of the site has been postponed at least three times due to complications in its design. Its first beta test is now slated for Feb. 13, and the date for a full launch is pending.

KCRW is committed to continuing its involvement with Sonic Trace, according to Harriet Ells, KCRW program director for arts and culture programming. She wants to build the production output so that pieces from Sonic Trace find their way to every corner of the station’s broadcast schedule. Diaz-Cortes has appeared on other KCRW programs to chat about Angeleno culture; during the Christmas holiday season, the station aired a story from La Burbuja every day.

The stories from Sonic Trace aren’t “focused on a specific thing,” Ells said. “What they’re covering is a . . . portion of the population of Los Angeles. That can inform so many of our content areas. I see them contributing to almost every show that we produce here. I’d like to see them across the schedule.”

This desire to place more Sonic Trace content in KCRW broadcasts stems from the station’s push to bring a wider range of voices to its air, Ells said.

“If you look at our programming lineup, we’re very heavy on the long-form arts and culture interviews and topics. Which are great, and we pride ourselves on that, but we wanted to also diversify a little bit,” she said. “And I don’t mean that on a racial front, I mean that just on the voices side. We wanted to get more stories of L.A.”

The uniqueness of La Burbuja has helped Sonic Trace find its audience, whereas its producers had previously struggled to pitch their concept to Latinos. But to Diaz-Cortes, the sound booth also represents something of an identity crisis for the 10-month-old project – an uncertainty about whether Sonic Trace’s true mission lies with StoryCorps-style audio libraries or high-quality, time-intensive radio documentaries.

“It’s almost like it’s two different departments of Sonic Trace: the production arm and this Burbuja community arm,” Diaz-Cortes said. At Radio Diaries, she had grown accustomed to massaging pieces for months before airing them and placing higher priority on the radio medium over online streaming. Now her producers want to see the project make a larger impact outside of broadcast through community events and an online databank of unedited Burbuja stories. Increasing online engagement is a big priority for the project’s second year, according to Ells.

“We’re not mutually exclusive, but I think we’re at that crossroads,” Diaz-Cortes said of the project’s dual directions. “It’s a blessing and a curse, because I think that tape deserves to be made beautiful, and that’s not what 99 percent of the radio world is trained to do.”