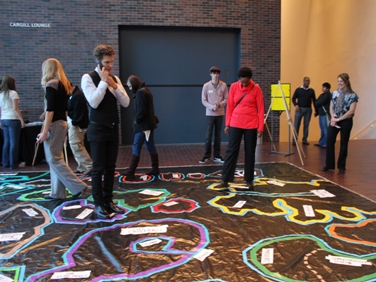 A visitor to the Walker Art Center in Minneapolis calls the Ed Zed Omega hotline while standing on a map. The event was intended to encourage participants to reflect on their experiences with schooling. Calls were later posted on the Ed Zed Omega website. (Photo: Andi McDaniel, Twin Cities Public Television.)

CPB’s American Graduate initiative has set its sights on targeting dropouts, but another project in public media is zeroing in on “rise-outs” — students who are excited to learn but feel that high school is failing to meet their needs.

The interactive, genre-defying Ed Zed Omega stems from Localore, the Association of Independents in Radio initiative backed by CPB to spawn collaborative, innovative multimedia projects at TV and radio stations around the country. The only Localore project based at a TV station, EZO has no broadcast component. Instead, it deploys actors to breathe life into stories of disenchanted high-school students who are considering dropping out. Created by game designer Ken Eklund, EZO is an alternate-reality game that challenges participants to tell the students whether they should stay in school.

The project, produced in collaboration with Twin Cities Public Television in St. Paul, Minn., is the second in which Eklund has blended elements of reality and gameplay to call attention to a social issue.

In 2007, his game World Without Oil, presented by the Independent Television Service, asked participants to imagine themselves in a world facing a global oil crisis. Through blogs, podcasts, YouTube videos and other online media, World Without Oil’s “players” explored how a catastrophic shift in the world’s energy sources would affect our everyday lives.

Eklund was looking to create another alternate-reality game when AIR  paired him with TPT for Localore; both he and the station had applied to participate in the initiative without partners in mind. The designer had been considering a game about education but hadn’t found a hook for one. As a participant in CPB’s American Graduate project, TPT had been exploring stories of dropouts, which suggested narrative possibilities to Eklund.

Education was a suitable topic for TPT, says interactive producer Andi McDaniel. The station’s family and education services department has been growing, and many of its documentaries have included an educational component.

Eklund’s proposal to produce a game was attractive to TPT because, unlike most other Localore projects, it did not emphasize newsgathering. TPT previously produced the statewide news program NewsNight Minnesota but now offers relatively little local news.

By staging an interactive game, TPT hoped to learn how it might engage younger audiences and also take more risks in its programming. “This seemed like a way that we could really open up our process and involve the public more in the unfolding,” McDaniel says.

TPT put out a call for actors, specifying that nonprofessionals were welcome. From more than 50 respondents, the station picked those who talked about their high-school experiences with the most passion and emotion.

Ed Zed Omega’s eight actors range in age from 16 to 31. Only one actual high-school dropout is in the mix; another was homeschooled.

Most of the actors are portraying high-school seniors who are considering dropping out. “I feel very trapped and suffocated. . . . There is a lot more than just sitting in a classroom,” one says in an introductory video on EZO’s website. The project’s name translates to “totally done” (“zed omega”) with education.

Eklund draws a distinction between the EZO students and the students that American Graduate targets — those who face pressures outside of school, such as pregnancy or family problems, that keep them from attending. The students portrayed in EZO are instead “rise-outs,” who want to learn but feel that school is no longer helping them achieve their goals.

As the EZO students struggle with the decision to either stay out of school or return to graduate, they share their thoughts and ask for feedback via a variety of channels: YouTube, Tumblr, Facebook, Twitter, email, a phone hotline and the EZO website. Eklund and TPT want their questioning to spark conversation about whether America’s educational system is preparing students to succeed in a rapidly changing world.

Today’s middle-schoolers will have jobs that haven’t even been invented yet, Eklund says, and schools aren’t giving students a crucial enthusiasm for learning and being creative. He wants EZO’s students to be the equivalent of the boy in “The Emperor’s New Clothes,” who points out something that is obvious to everyone but discussed by no one.

“Ed Zed Omega has been this really cathartic moment where the truth about education is coming out, and also this realization that you don’t need to follow that path if that path is not working for you,” he says.

Eklund and TPT furnished the cast with backstories but no scripts, encouraging the actors to improvise and draw on their own experiences in school as the project unfolds. Real-life experiences have intruded as well. An actor who took a hiatus when his cousin passed away wrote about the death in character upon returning to EZO.

The game’s creators were unsure which elements would prove successful when they launched EZO. It’s turned out that using the actor-students at live, interactive events has sparked some of the most thoughtful discussions.

“The game, and explaining what an alternate-reality thought experiment is, can get bogged down in concept,” McDaniel says. “But if you’re interacting with someone playing a role, there’s no explanation required.”

At live events, the actors have talked for 15 minutes, and the discussions after they leave the room have gone on for 40 minutes, with no guidance needed from Eklund or McDaniel. “It’s easy for adults to talk about teens in a third-person way,” Eklund says. “But when they’re confronted with having that conversation with a teen, all of a sudden it becomes an entirely different discussion, with assumptions laid open for questioning.”

At an event at the Walker Art Center in Minneapolis, the EZO students invited visitors to walk across a map on the floor that featured islands with labels such as “Standardized Testing,” “I Hate People” and “My 21st Century Job.” Explorers were directed to call a phone number and record their reactions to the islands they stood on.

“One of the things I find myself wishing I had when I was in high school was better orientation — really, somebody along the way who would’ve told me what it was for,” one caller said.

As EZO wraps up, the students will decide whether they’re returning to school. Some have yet to have what may be tumultuous fights about the matter with their parents. In December, the actors will step out of their characters and talk about how the role-playing exercise has affected their views of education.

The project has inspired McDaniel to look for more ways that TPT could use actors to facilitate conversations, as the EZO students have done. Eklund’s improvisational approach to creating and guiding interactive games has inspired TPT to be more nimble, she says, possibly by creating a division within the network that regularly undertakes such projects.

“We don’t want someone to hear about a project like this and think, ‘Really? TPT is doing that?’” she says. “We want them to think, ‘This is part of their mission.’”

TPT will sift through the many calls, comments and letters that it received from the public and posted on its website, then figure out how to package them in some finalized form, McDaniel says.

For his part, Eklund hopes that the ripples created by EZO will influence the ongoing discussion of America’s educational system. Change will come “when people start gathering together their individual complaints and expressing how dissatisfied they are with the system,” he says, “and when they’re ready to support someone with ideas about what the system should be.”