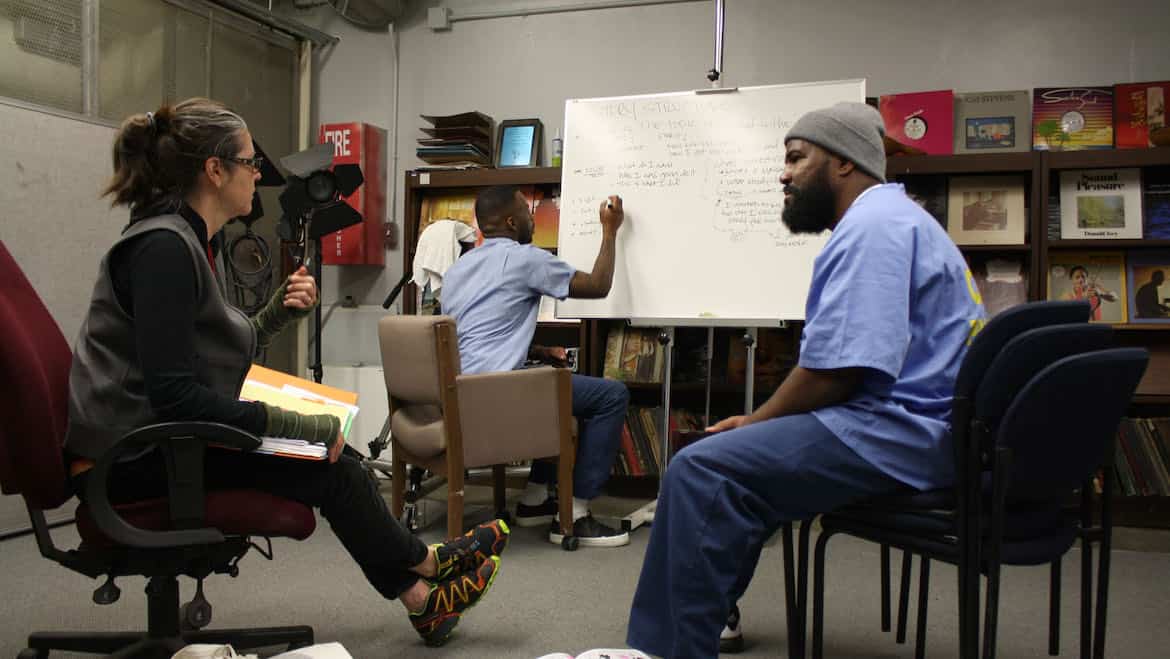 Over two decades ago, Earlonne Woods committed crimes for financial gain and kept the cash under his mattress. When he left prison Nov. 30, 2018, after former California Gov. Jerry Brown commuted his three-strikes life sentence, he had never had a bank account.

On Dec. 3, 2018, Woods was hired to continue working on the Ear Hustle podcast we co-host and co-produce along with Nigel Poor, which launched from inside San Quentin State Prison.

“When I got my first check, I just kept looking at it in my account through an app,” Woods said. “I literally had a check in the bank: That shit was monumental.”

To date, Ear Hustle has been able to hire everyone who worked on the podcast in prison once they were paroled. Sound designer Antwan “Banks” Williams and producer John “Yahya” Johnson are now paid to use the skills they learned inside the San Quentin media center.

“I loved working on Ear Hustle inside, but there’s nothing like being paid for the work you actually do,” Johnson said.

Williams added, “It feels good to be employed, it feels better to be in a field that I love, and it feels greater to be working with the people I was doing the work with inside.”

At first, everyone including Poor worked in the prison media center as volunteers. Poor, a professor of photography, started volunteering at San Quentin teaching a college class in 2012. She switched to volunteering with San Quentin Radio, a radio show that receives training from, and airs stories on, KALW Radio. There she met Woods and Williams.

In 2016, Poor and Woods decided to start an audio platform that would differ from the pieces produced for KALW in that it would be straight storytelling, or “journeyism,” as they call it. They brought in Williams as the sound designer and planned to air on the prison’s closed-circuit network until an opportunity to enter a Radiotopia Podquest contest appeared. They got permission from the prison to submit samples of three stories about prison life and won the contest.

“It looked good, it sounded good, and it was a new, fresh perspective that wasn’t out there yet,” said Radiotopia and Ear Hustle EP Julie Shapiro. Radiotopia, which operates under PRX, distributes and promotes shows in its network and helps independent podcasts grow audiences and raise revenue.

Woods, Williams and Poor had no experience producing a podcast. While they worked long hours at the prison to produce Ear Hustle, Radiotopia took care of the business side. Woods could be found wearing headphones and typing on an iMac from 7 a.m. to 8 p.m. most days. Poor came in often between teaching classes at Sacramento State and also worked from home. Woods had to learn sound design when Williams was sent to the hole for unauthorized fashion items before the launch of season one.

“We had to figure out, how do we do this one man down?” Woods said.

To date, Ear Hustle has received over 54 million downloads. But during the production and release of season 1, due to complications inherent with being incarcerated, Woods and Williams did not receive a cent for their work.

“I think you should be able to make money while in prison,” Shapiro said.

Ear Hustle has a unique relationship with PRX, Radiotopia’s parent company, in that PRX co-produces and hires staff. Poor was not immediately hired, but Ear Hustle did receive $10,000 for being a finalist in the Podquest contest and a stipend for the first season.

Under current prison policies, media center workers make $56 a month at best. I make $36. Some guys volunteer, like Woods did.

“It wasn’t even about trying to capitalize,” Woods said. “It was more about trying to get our voices out and actually learning a trade that I’m interested in instead of refrigeration. I learned something that is definitely beneficial. It was bigger than me.”

Prior to his incarceration, Woods had longed to learn a media trade. Before committing the attempted carjacking that led to a life sentence, he attempted to sign up for film school at the American Film Institute. However, he didn’t have a GED diploma at the time.

“When I went to prison the first time, it wasn’t about rehabilitation,” Woods said. “It was about crime and punishment. They didn’t care about the putting-you-through-school part.”

Woods tried to get financial aid and work his way into film school but got caught up running the street and failed to follow up.

“I was back in the crime world, and a little while later I ended up going back to prison,” Woods said.

Behind bars again, Woods got his GED diploma and took classes in vocational trades like auto mechanics. During a lockdown at Centinela State Prison, he saw a documentary about the San Quentin Film School and knew that he needed to be there. Eventually, Woods reached San Quentin, learned film and audio engineering and co-created Ear Hustle. While he didn’t receive a paycheck from the state, he did get financial support from fans.

“Random people in society, just out of the kindness of their hearts, used to JPay me money,” Woods said, referring to a company that facilitates cash transactions to people in prison.

Shapiro never envisioned Ear Hustle leading to employment for its formerly incarcerated staff, but she’s glad that it did.

“We weren’t thinking that far ahead,” Shapiro said. “But once it became clear Earlonne was going to get out, we immediately started thinking about how to accommodate that. It wasn’t like, ‘Oh, we could do this for Earlonne’ — we were so glad he wanted to stay with the program. He could have gone and done anything once he got out, so it was really an equal partnership in that we could provide an income for Earlonne and he could show up and still represent the show.”

Shapiro added, “We could be personally supportive and keep the show going by taking all of the skills that are being taught inside and put them to use on the outside. We can also be an example for other programs as well, but mostly it was really about keeping the show together and keeping the team strong.”

Williams, who was hired in March of 2020 for season five after a conversation with Shapiro, learned sound design from Pat Mesiti-Miller, an experienced engineer who works with Snap Judgment.

“Working with Pat is like working with the best teacher in school on the one-on-one level,” Williams said. “It shows the importance of smaller classes.”

The engineering skills Williams learned also helped him produce his own album, Moments in Time.

“Ear Hustle pays the bills. Everything else is side projects,” Williams said. “People always need people who can make things sound better.”

KALW’s Uncuffed, another award-winning podcast that launched from San Quentin and Solano State Prisons in 2018 and features candid conversations with incarcerated men, is also leading to success on parole. It receives financial support from the California Arts Council’s Transformative Arts program (formerly Arts in Corrections), which is funded by the California Department of Corrections and Rehabilitation. That funding does not include paying the incarcerated cast and producers of Uncuffed. However, KALW and Uncuffed recently hired a staff member on parole — Eric “Maserati E” Abercrombie — as their sound designer.

“I was super excited,” Abercrombie said. “With a bunch of people more knowledgeable in the field applying, I wasn’t sure I was going to get it.”

It took a four-hour interview and the completion of two assignments for Abercrombie to secure the Uncuffed gig.

“I learned my skills at San Quentin messing with Banks [Williams] and Pat,” Abercrombie said. “KALW trained the creators of Ear Hustle, and Ear Hustle trained me.”

Abercrombie has also dropped an EP, Just Me and My Guitar.

The 27-year-old said that he committed financial crimes because he had internalized a distorted belief system and felt as if he had no value or voice, so he overcompensated for his weakness with toxic masculinity. He ended up in prison for years and paroled in 2019.

“For myself, as well as anybody, employment is a big factor versus recidivism,” Abercrombie said. “I don’t have idle time, and I’m doing what I love to do, using my creativity.”

Woods said that if he hadn’t been sent to San Quentin and co-created Ear Hustle, he’d probably be an auto body mechanic, making less money. He’d still be seeking to abolish the three-strikes law through his nonprofit, CHOOSE ONE (Can Hip-Hop Overturn Oppressive Sentencing Enhancements). Ear Hustle allows him to pursue his goal without taking a salary.

“I worked with [Los Angeles prosecutor George] Gascón, did a podcast with [San Francisco prosecutor] Chesa Boudin and worked with a Supreme Court Justice,” Johnson says. “Ear Hustle gave me the exposure and put me in the right arena. I don’t know if I would have done all that in a year without Ear Hustle.”

Johnson went home in 2020 during the beginning of the coronavirus pandemic.

“Working during a pandemic, I am able to take care of myself,” Johnson said. “I don’t have a care or concern except getting the rest of y’all out of there [prison].”

Shapiro added, “I’m glad we can show that if you trust, make the right decisions and work with the right people, these relationships can really blossom on the outside once people get out. People are trained to do all kinds of things, so the value is maybe a job with us, maybe it’s a job with another show.”

Ear Hustle is more than its episodes and awards, Shapiro said. “It’s really about changing how people think about incarceration and people who are incarcerated,” she said. “So being able to employ guys who get out, and potentially women down the road, it’s the next level of what the show is for.”

“We have dope conversations and strategize to see what we can do to make a difference, and I love that,” he said.

I hope to have a chance to parole within the next year or so and look forward to seeing what the skills I picked up at San Quentin lead to for me.