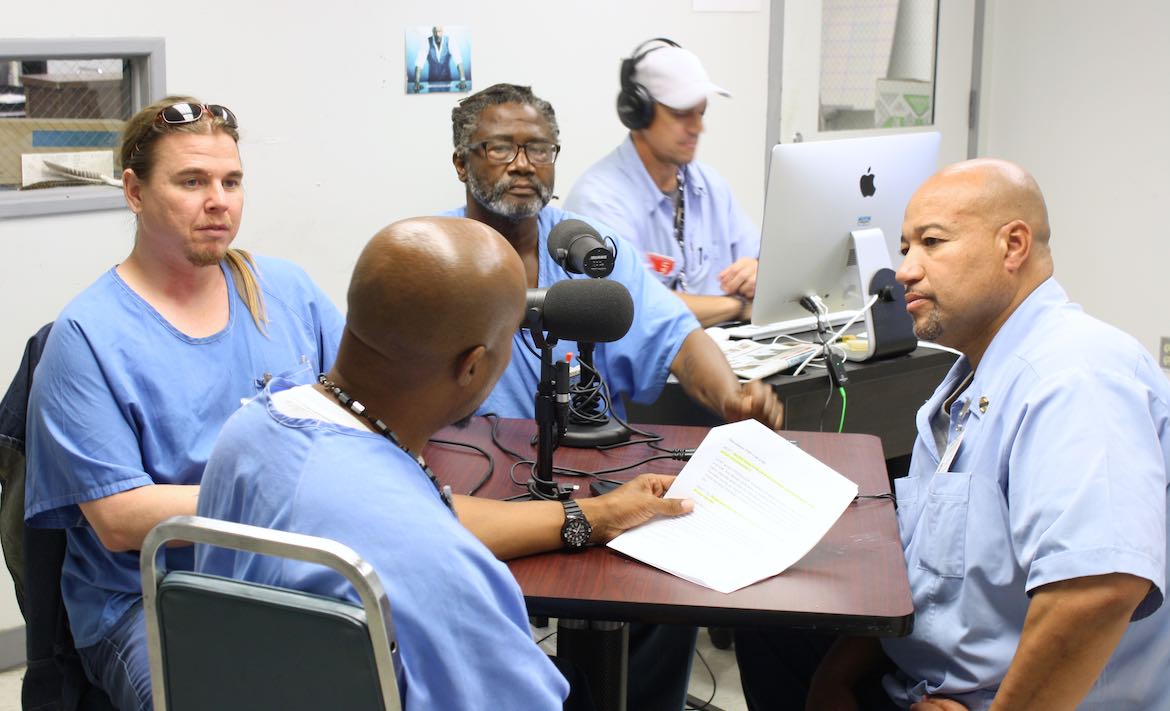 When KALW Public Radio started its partnership with the radio program at San Quentin State Prison back in 2012, the incarcerated men had one stipulation: They didn’t want anyone coming in controlling their narratives. They demanded to be taught how to tell their own stories. KALW obliged, and the results have been award-winning.

“A lot of reporters put their perspective in the story, and not the person incarcerated — that’s the beauty of telling our own stories,” said Greg Eskridge, an incarcerated audio journalist for SQ Radio. The course teaches audio journalism to people incarcerated at San Quentin, with the resulting stories featured on the prison’s institutional TV station as well as KALW.

“All KALW staff is hands-off with our program, which was one of the big concerns when we first started,” Eskridge said. “We wanted to control our narrative, and KALW gave us the opportunity. They are in the background. That shows that they’re in this for us — they want us to prosper. They want the world to hear directly from us.”

Eskridge joined the San Quentin Radio program in 2012, producing audio stories for both KALW and Life of the Law, an online audio platform that focuses on stories involving legal issues.

The tall, dark-skinned man has helped the SQ Radio/KALW team win back-to-back Society of Professional Journalists Excellence in Journalism awards in 2017 and 2018.

“It’s a great accomplishment,” Eskridge said. “It feels good to know what we’re doing is being heard and recognized. Nice to see people interested in those shut away from society.”

In 2018, KALW expanded its model of training incarcerated people in audio production to control their narratives to Solano State Prison with Uncuffed, a new podcast. KALW also acts as a bridge between San Quentin and Solano State Prisons, allowing them to co-produce Uncuffed episodes. It launched in October 2019.

Ninna Gaensler-Debs, who teaches audio at the University of San Francisco, is the SQ program director and senior producer of Uncuffed. Pre-pandemic, she visited San Quentin’s prison media center twice a week to help with editing and to participate in meetings.

Gaensler-Debs said she feels that everyone should have the opportunity to share their narrative. “Coming to prison should not be the first time someone has the opportunity to tell their story,” Gaensler-Debs said. “Everyone deserves a chance to share their truth unmitigated because we all have so much to learn from the way incarcerated people process trauma and grief, which also happens on the outside.”

Gaensler-Debs works with Eskridge at San Quentin to produce Uncuffed. “I can’t imagine a better collaborator,” Gaensler-Debs said. “He’s thoughtful, smart, a good leader, and he brought people together to produce Uncuffed.” Eskridge is one of the hosts of Uncuffed podcast’s San Quentin production team, which includes San Quentin incarcerated members and five other incarcerated producers from Solano State Prison. Two producers from the first season were granted parole, one from San Quentin and one from Solano.

From San Quentin’s small media room crowded with people and outdated Apple computers, the Uncuffed team struck gold winning two awards in 2020 for its first season. With only four episodes due to the pandemic shutting down access to the prison’s media center, Uncuffed took both the Northern California SPJ Community Journalism Award and the San Francisco Press Journalistic Excellence Awards.

Uncuffed was also a finalist in Current’s 2020 Local that Works contest and was among the most popular podcasts produced by NPR stations last year, according to the network.

Episodes covered the experience of COVID behind bars, expressing remorse through music, repairing family dynamics, and holidays in prison.

“I’m not in it for the awards. I just want people to understand what’s going on in prison, and the only way to do that is to hear our stories,” Eskridge said. “I’m just a chauffeur — awards are great, but humanizing people in a dehumanizing situation is much greater than any reward anyone could ever give me.”

Eskridge has told audio stories for KALW about stopping gun violence, why incarcerated people should have voting rights, and a preacher’s son who ended up in prison with a life sentence during which he himself became a preacher.

He’s proud to share the stories of incarcerated people, because Eskridge knows from personal experience the dangers of a rap sheet controlling his narrative. He ran away from home at the age of 10 to avoid further abuse from his mother’s boyfriend. He spent the next 10 years in and out of foster homes and trouble. At 20 years old, he was imprisoned for multiple life sentences for second-degree murder, attempted murder, assault and gun enhancements.

With 58 years to life and 39 years in enhancements alone, freedom felt impossible, but Eskridge still made the best of his situation. He enrolled in a college program, joined SQ Radio, participated in several self-help groups, completed a plumbing vocational course and fell in love with and married a woman. Without a real possibility of parole, he had different incentives for doing the right thing.

“It’s just nice to be able to do something positive as an act of remorse,” Eskridge said. “I seek amends in bringing awareness to certain causes and also working with a group of people who may have at one point been introverts and now have a platform where they’re being heard. It’s also makes me proud that my family can see me doing something positive.”

He said that his work as an audio journalist has had a rehabilitative effect.

“Personally, it’s giving me the opportunity to learn about myself, to learn about other people. It taught me compassion, made me a better listener and a better person in general,” Eskridge said. “I understand people and I’m able to talk to people, and for people to trust me with their stories is big.”

“Mother and Son,” a story he produced for Life of the Law, helped him reconcile with his own mom. The two are now closer than they have ever been.

“Before ‘Mother and Son,’ we only spoke on a surface level,” Eskridge said. “Things opened up after the story because there are no more lies, no more secrets.”

A chance for freedom

Hope of freedom came for Eskridge when the tide shifted towards more humane sentences for crimes committed by juveniles with laws like Senate Bill 261, which grants a chance at parole to people who committed their crimes while under 25 years of age, before their adolescent brains could fully mature. Eskridge thought that under the new law, after serving 25 years in prison he would get a chance to show parole board commissioners the man he is today.

His heart was broken after reading the fine print of the law that passed in September 2015. It  excluded people with prior convictions as adolescents or additional crimes as adults.

Eskridge got his hopes up again when newly elected progressive Los Angeles County Prosecutor George Gascon took office in December. Gascon announced that he would address systemic racism in sentencing by using his power to review all cases out of Los Angeles and recall them to remove sentencing enhancements. For Eskridge, that would mean a sentence reduction of 39 years and an immediate chance at freedom.

“After the juvenile bill 261, I did lose some hope in the system,” Eskridge said. “Gascon’s directive gave me hope again. I read it over and over, every day, looking for exclusions, because I had learned my lesson from SB261.” Nothing in Gascon’s directive excludes Eskridge; however, the Los Angeles prosecutor’s staff rebelled, leaving his resentencing plan moving at a snail’s pace.

“I’m still excited and optimistic, but it’s scary to know that right now, Gascon’s directive is my only shot,” Eskridge said. “He could change his mind, and I’ll still be stuck in prison.”

If ever released, Eskridge wants to continue the mission he’s on inside.

“I would like to start my own podcast and go into communities and be able to tell the stories of people in society just like I do in this place,” Eskridge said. “I think a lot of people are misrepresented and misunderstood, and I would like to tell their stories — single mothers raising kids, homeless juveniles — stories that can empower communities.”