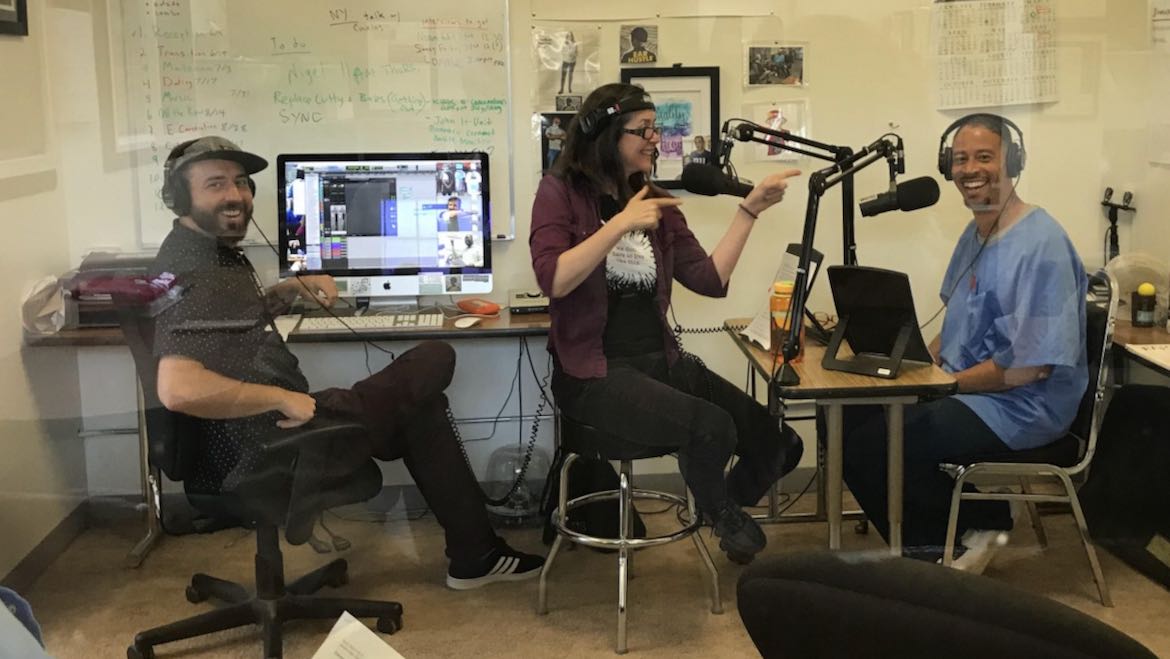 Imagine starting as a rookie on a championship NBA basketball team. You are playing your best ball ever with all-star teammates that mentor you and compliment your game. It’s a joy coming to work.

You make the NBA finals but fall just a little shy of the grand title. The next year your team appears poised to go all the way. Then, just as your second season starts, you get benched by a pandemic.

That’s how I felt when Nigel Poor, the co-host and co-producer of the hit Ear Hustle podcast, told me over the phone March 16 that she wasn’t coming back into San Quentin State Prison. The first three seasons of the podcast were created and entirely recorded here, inside the prison, by Earlonne Woods, Antwan Williams and Nigel, who originally came into San Quentin as a volunteer. Then Earlonne and Antwan paroled. I became inside host while Earlonne hosted from outside as the show took on a new dimension with stories from people on the other side of incarceration: parole.

Even still, the bulk of our stories came out of San Quentin. Then to protect us, Nigel stopped coming, figuring we couldn’t get infected “if no one brings it inside the walls.”

However, a huge question remained. What would we do about season five? The Ear Hustle team outside San Quentin would have to manage with the stories we began inside and with interviews of people on parole.

Two days later, the prison administration barred volunteers from entering the prison and indefinitely closed the media center, where we record Ear Hustle. Season five of the podcast went on without me.

Not forgotten, I got a letter that my “rookie season” of Ear Hustle was nominated for a Pulitzer Prize. This American Life won, but it’s a huge honor to be considered for such a prestigious award while still in prison. I felt so proud of my colleagues Nigel and Earlonne and grateful for them choosing me for the job that led to sharing such an honor.

My palms itched to help us win the prize next year, yet season six was scheduled to start Sept. 9 with me still sheltering-in-cell. Although the launch of the first episode was months away, with no COVID-19 vaccine in sight I was sure to be locked out again.

Earlonne always said, “Ear Hustle isn’t about us.” I remembered his words and the fact that they were already super-successful at presenting the stories of system-impacted people long before I arrived. Ear Hustle would be fine. The more immediate question was, would I survive the coronavirus outbreak that began sweeping San Quentin, trapped in a cell block packed to 175% of design capacity, preventing social distancing with poor ventilation?

I felt my first symptoms June 21 — a pounding headache. June 23, I tested positive for COVID-19. Thank God, I recovered in July, but by mid-August over 2,000 prisoners had contracted the virus (one-third of the population), and 25 were dead. I had no idea who passed away, as most people with symptoms were moved. Some went to the hole or other quarantine areas, some went out to the hospital, and some went home.

Prison Twitter (the grapevine) said people were dead that turned out to be alive, so what I did hear was unreliable. The news announced the names of guys deceased on Death Row, but no mention of who passed away on the mainline except for an increase in the body count. I laid on my bunk, stared at the ceiling and wished to tell this story on Ear Hustle.

As if reading my thoughts, a CO comes to my cell. He hands me a “u’savem” envelope (used for international mail) over the top of the gate along with a few letters. Inside the u’savem was a piece of paper titled, “Ear Hustle Season Six Episodes for New York.” I read summaries of the first five episodes, and at the end, it mentioned I was off the bench. My new role: a cameo at the end of each episode.

For interviews, I get out of my cage, go down five tiers to the collect-call phone booth and dial Earlonne’s number, but only when there’s no program going on. (No one out their cells except critical workers.) That’s usually about 6:30 pm on a Thursday or Friday. Despite the odd hours, Earlonne and Nyge are often down to work whenever I can call. It feels great to talk with them again and joke during the interview, even with the constant interruption of a computer voice saying, “This call is from an inmate at a correctional facility.”

Nyge and Earlonne hit me with a tough co-producer assignment — find guys to talk about the character of the 28 people who died from the coronavirus outbreak at San Quentin. Even as the count increased, I still didn’t know who most of the deceased were because the population is kept separated from different tiers and other cell blocks so I couldn’t tell who was missing. Whenever I see a friend I haven’t seen since the outbreak began, my greeting is, “Thank God, you’re still alive.”

Co-producer Bruce got on the phone line and gave me the first nine names of those deceased that were on the mainline. I didn’t recognize any of them and took some consolation that most of my favorite people were not killed. After the call I started sharing the names and asking around about them.

I found out about another name to add to the list just as I thought the outbreak had taken enough of us this round. This guy changed his life in prison, including becoming a Christian and getting married. After serving decades in prison for burglary under the three-strikes law, he was scheduled to see the board in January, but the virus paroled him to heaven first. Tears wet the corners of my eyes as I collected facts like that for each person on the “should have been released rather than left in an overcrowded prison to die” list. Ear Hustle has done several tough interviews before, but this is my toughest.

I still love my job, and although Ear Hustle isn’t about social-justice reform — we just tell people’s stories  — this special assignment feels similar to the NBA dedicating 2020 to social justice in that the COVID-19 episode feels bigger than usual to me. We’ll be saying many of their names. Not just those who died in San Quentin, but in the whole California prison system.

On Oct. 22, a California State Appellate court ordered San Quentin to reduce its population by half due to the ongoing deliberate failures to protect us from COVID-19 — a decision that’s resulting so far in increased transfers. I’m waiting to find out if the decision sticks on appeal and if it means I will get transferred, remain here or released on parole, and how each outcome could affect my favorite job.

In the meantime, I wish the court order was four months and 29 lives sooner, because all we can do now is say their names.

Rahsaan “New York” Thomas is co-host and co-producer of the Pulitzer Prize–nominated podcast Ear Hustle, from PRX’s Radiotopia podcast network. He is also a contributing writer to the Marshall Project and San Quentin News. Thomas is currently incarcerated and has a fundraising campaign seeking help to secure his freedom.