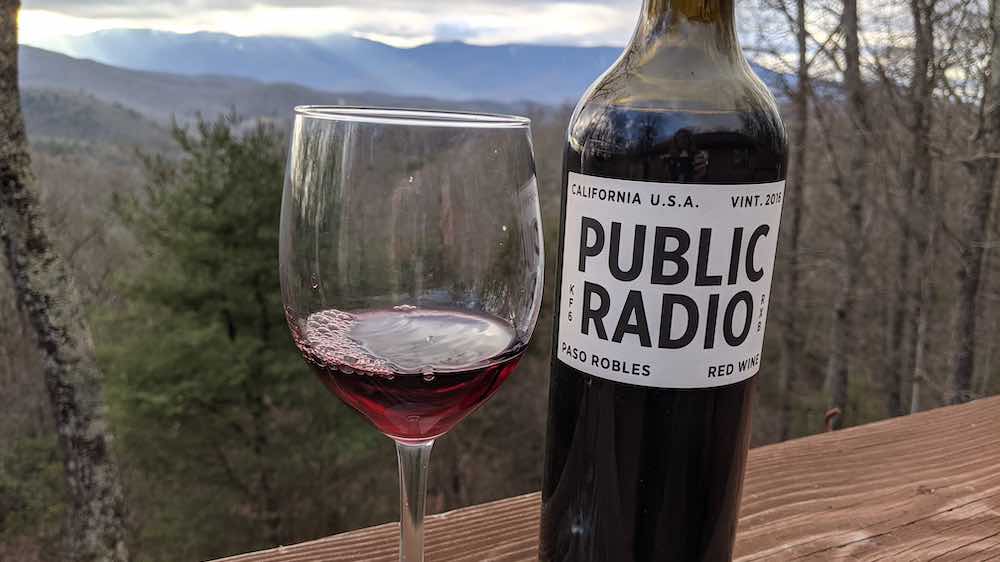 For wine-drinking public radio enthusiasts, one label might cause a double take in the wine aisle — Public Radio from Grounded Wine Company.

The company’s website notes that the wine’s “quality and personality lies in its self-awareness; sensitive to the zeitgeist while acknowledging its role as part of an ongoing story.” But it doesn’t offer many clues about the backstory of the wine’s name. So we went to winemaker Josh Phelps to learn more.

Phelps is not a public radio listener, he said, but his dad is. And his grandfather was an amateur radio operator.

Public Radio is one of the Napa Valley–based company’s smaller brands that help “tell our story and let us have some fun,” Phelps said. GWCo. introduced the Public Radio label with the 2016 vintage.

When deciding on how to brand the wine, Phelps was looking to use a “retro Americana” themed name, he said. His father Chris Phelps, a veteran Napa Valley winemaker, operates his own vineyard specializing in cabernet sauvignon. One of Josh’s childhood memories is riding in the car with his dad listening to NPR.

Having grown up and been “around the business for so long, I felt that we wanted to kind of give a nod to the past, but really also simultaneously focusing on making the wines we wanted to make and the style we wanted to make,” Phelps said.

It felt like a “fun, cool, relevant thing with our theme,” he said. When Phelps is in his car, he’s on phone calls or listening to wine podcasts.

The wine label also displays the call sign that Phelps’ grandfather, Paul Phelps, used as an amateur radio enthusiast — KF6RXB.  His grandfather died two years ago, and Phelps added the call sign as a “nod to him.”

Amateur radio was always a hobby for his grandfather, Phelps said. He had a radio room that was “like you were on an army base,” Phelps said, and would be “talking to people around the country. It was truly this form of communication that he loved.”

NPR got into the wine business in 2017 with its branded wine club (which we reviewed), but Public Radio has no connection to the NPR wine club. The Public Radio brand does draw special attention from customers. “People always ask about the name,” Phelps said.

During the pandemic, Phelps has done more virtual tastings of his wines, he said. At every one, there are “one or two people in the room that … gravitate towards that wine because of the name, because of the messaging, which is kind of fun, because it just makes it a little different and keeps things interesting,” he said.

Grounded makes about 2,000 cases a year of the Public Radio wine, which is “pretty tiny,” Phelps said, but it’s distributed across the country.

Is it any good?

This untrained, occasional wine drinker found Public Radio refreshing to sip on a warm spring evening. Made with 90% grenache and 10% syrah, it’s light, without compromising its fruity flavor.

Judith Smelser, a public media journalism consultant and trainer who writes and podcasts about wine as a hobby, received a bottle of the wine a few years ago as a gift from a fellow oenophile who knew she worked in public radio. She opened it in December during a Zoom Christmas celebration and said she was “pleasantly surprised.”

Since the wine comes from the Paso Robles region of California, Smelser expected it to be a “huge wine — big body, big fruit, high alcohol, and probably a lot of oak influence — definitely not the style of wine I usually like to drink.”

“The wine was certainly generous with its fruit aromas and flavors, and I seem to remember some silky cocoa notes coming through too,” she said. “The alcohol content was on the high side, but its body was lighter than I expected, and there was enough acidity to keep the fruit from being cloying.”

The 2017 vintage received a 92 (out of 100) rating by Wine Enthusiast, the second-highest rating given to Grounded’s wines by the industry magazine.

“This is a wine you could have with salmon and chicken and steak,” Phelps said. “It’s just a super universal wine.”

Priced at $25, Phelps envisions Public Radio and his other brands as accessible wines, compared to the pricing of other Napa wineries.

“It’s all about making something that everyone can enjoy,” Phelps said. “It doesn’t need to be snobby or pretentious. It can just be a delicious beverage that can be enjoyed by all.”