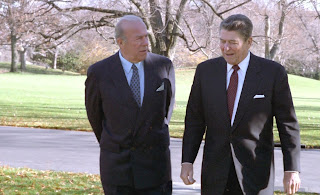 Several hundred e-mails landed in PBS Ombudsman Michael Getler’s in-box regarding the three-part doc “Turmoil and Triumph: The George Schultz Years,” running this month on PBS (image, PBS). Viewers raised many of the same issues that media watchdog FAIR (Fairness and Accuracy in Reporting) did regarding the laudatory tone of the film as well as funding closely linked to the former Secretary of State — particularly by the Bechtel Foundation, where Schultz was president for seven years.

In response, PBS told Gelter in part: “No PBS funder is permitted to exercise editorial control over content. This is the most important consideration in our underwriting policies. . . . It was determined that Shultz’s role in the Bechtel Corporation — which is disclosed in the program — did not preclude funding from the related family foundation under the circumstances since subject matter of the program was Shultz’s role as Secretary of State in the Reagan administration, not his role in the corporation.”

Producer David DeVries told Getler that during the three years of production, “I was completely unaware of who the funders were,” and he was “never pressured” to present Schultz in a good light. “The overall positive tone of my portrait of George Shultz was arrived at through my own research and an extensive interview process. It is positive because I legitimately came to believe Shultz has been a dedicated public servant and a great Secretary of State.”