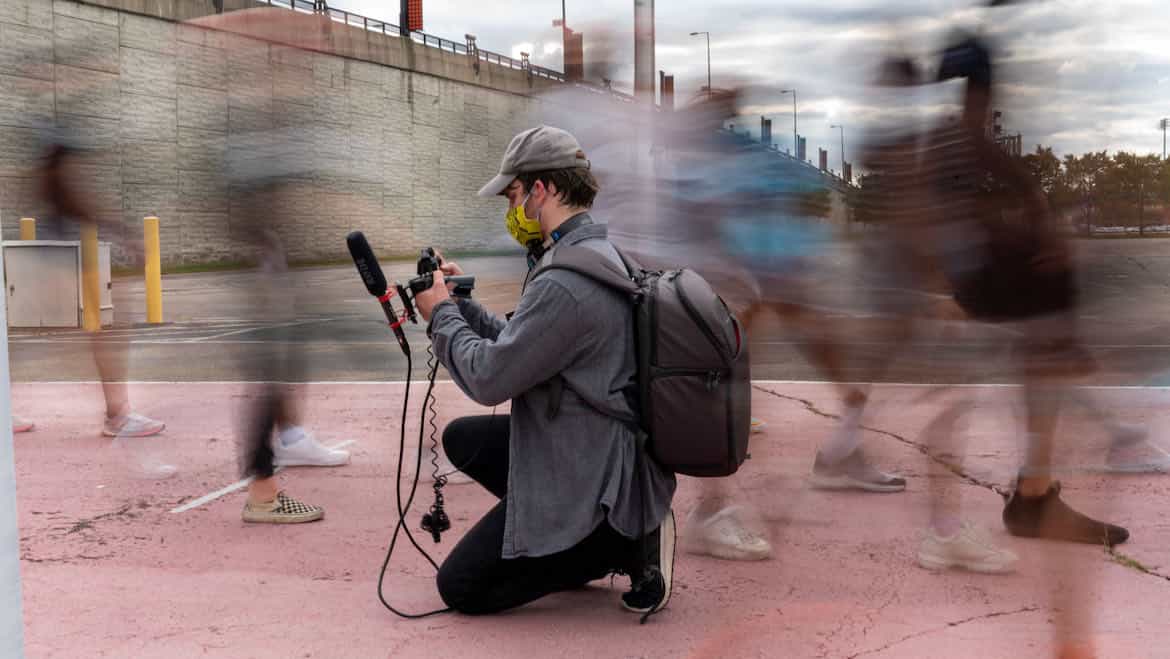 John Boyle, a Report for America corps member at Louisville Public Media, records outside Cardinal Stadium during a march in support of Breonna Taylor.

Stations working with Report for America have boosted their fundraising and reporting staffs by leveraging their partnership with the nonprofit initiative funding the hiring of journalists in newsrooms across the country.

Donors interested in supporting public service journalism increased their contributions last year to fund the salaries of RFA reporters assigned to undercovered areas in their regions. Some foundations made their first donations to public radio as a direct result of RFA.

Connecticut Public, the public radio and TV organization in Hartford, received a two-year $25,000 grant — the first from a foundation in the western part of the state — after it hired an RFA reporter last summer to cover the area, known as the Naugatuck River Valley. The station had not regularly covered the region, a heavily Republican stronghold in a predominantly Democratic state.

The number of major donors at KCAW Raven Radio in Sitka, Alaska, jumped by 85% last year, despite severe economic hardship in the region because of the shutdown of the cruise industry. A major impetus for the increase was the station’s first RFA reporter, hired in 2020 to cover seven remote Alaskan communities and the energy industry.

“What we did with RFA is take a more traditional major-gift approach,” said KCAW GM Becky Meiers. That involved targeting donors who had previously supported the station’s internship and fellowship positions, which were replaced by the RFA corps member.

A new report released by RFA shows that the average amount raised for the program by each nonprofit newsroom last year was $41,254, an increase of 31% over 2019. RFA partnered with 163 newsrooms last year, and nonprofit newsrooms accounted for 52% of corps member positions.

Under the RFA model, newsrooms are required to cover half the reporter’s salary, but 25% of that amount is expected to come from local philanthropy. In 2020, nonprofit newsrooms raised $27,907 per reporter, more than half the average salary of $40,000 for an RFA reporter, Franko said.

Louisville Public Media, which includes news station WFPL, raised $53,000 for its two RFA reporters in direct contributions from individuals and foundations and supplemented that with $20,000 from general operating revenue.

“RFA has been a nice trigger for fundraising, which is what it is designed to do,” said LPM President Stephen George. “We’ve been able to say we are making these big investments in much-needed coverage in our community and we have the support of this national organization that is trying to build a reporting corps in places that have been overlooked by the media.”

LPM hired its RFA reporters in June to cover key underserved areas — Southern Indiana, just over the Ohio River from Louisville, and social services and youth services across the state. Yet the reporters had to switch gears with the coronavirus raging and massive demonstrations taking place last summer to protest the killing of Breonna Taylor by Louisville police officers.

“We have a big enough newsroom to handle it, but their contributions have been undeniably major,” George said. “We would not have been able to do it in the way that we have done it, which is to be solely present for these two major stories day in and day out.”

While the reporter at KCAW was assigned to cover seven Alaskan island communities and the energy sector, she has also helped track the pandemic, including keeping tabs on local business closures and updating health information on the virus.

“We had to actually expand our services to cope with the pandemic,” Meiers said. “The newsroom was creating all this information and coverage like a full-team press. The RFA reporter contributed to that effort greatly and was tracking what was happening in all our translator communities.”

Connecticut Public assigned an RFA reporter to cover Latino communities across the state in addition to hiring a corps member to report on the Naugatuck River Valley. The station is now planning to hire its third RFA reporter in June to focus on affordable housing.

The station has committed to raising between $40,000 to $50,000 to help pay for the salary and benefits for each of its RFA reporters over a two-year period, Tavera said. The total cost of hiring a reporter each year ranges from $65,000 to $70,000 annually.

“Being able to talk to our donors, whether they’re major donors, grantors or members, about RFA and its ability to augment our newsroom and cover important stories, especially during COVID this past year, is a very compelling story,” Tavera said.

Targeting donors interested in the areas the RFA reporters were covering was also a critical part of the station’s fundraising strategy. For example, Connecticut Public reached out to major donors who wanted more coverage of Latino communities and asked them to consider multiple-year gifts, Tavera said.

Under the agreement newsrooms make with RFA, an initiative of TheGroundTruth Project, the funding it contributes to reporters’ salaries declines over three years. The subsidy starts at 50% of salary up to $25,000 in the first year, then drops to 33% in the second and 20% in the third.

An analysis of fundraising to newsrooms partnered with RFA in 2020 shows that individual donors made up 48% of all gifts, the largest group of contributors. The average gift from individual donors giving under $5,000 was $68, the report said.

While some stations have not made a long-term commitment to keep their RFA reporters on staff, others plan to retain them beyond the three-year time frame. Louisville Public Media, for example, expects to keep its RFA reporters “for the foreseeable future,” George said.

“RFA has been a tremendous asset for our station and for the public media system overall, and I look forward to continuing to grow and build those relationships,” he said. “It’s a way to inject direct funding behind public service journalism that does not meet a commercial objective.”