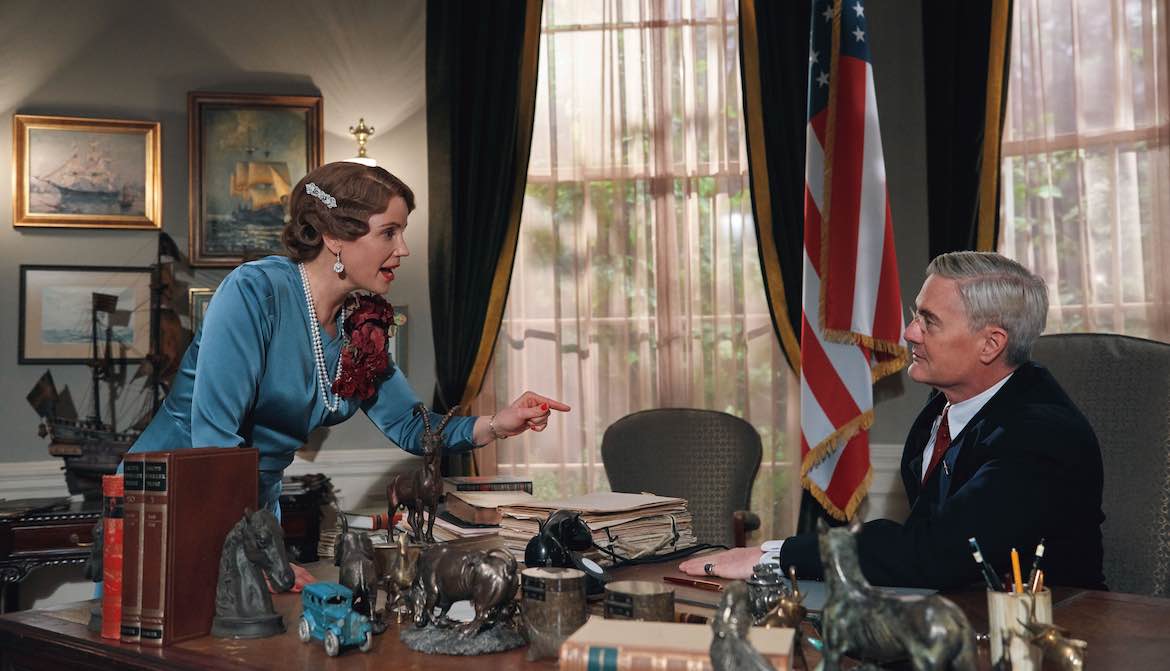 “We had five productions that were delayed by COVID,” Simpson said Thursday during a virtual session of the Television Critics Association Winter Press Tour. In the early day of the pandemic last March, no one knew how long TV productions would be affected by lockdowns.

“Because I’m just naturally a worrier, I decided that I’d better start looking for projects right away just in case the lockdown went longer than everybody expected,” she said.

Among the dramas that caught her eye was Atlantic Crossing, an eight-part series that premieres April 4. It is Masterpiece’s first ever co-production with Norway’s public broadcaster NRK. Additional production partners are Denmark’s DR and Sweden’s SVT public television networks.

The series is based on a little-known but true story from World War II, when Norwegian Crown Princess Martha prevailed on President Franklin Roosevelt to help save her country from imminent German conquest. The drama follows the relationship that developed between them.

Simpson had known about the production for at least six months but hadn’t pursued it because a Norwegian drama was “a little different than what we normally do, “ she said.  But once she saw it, “it wasn’t a very hard decision.”

Masterpiece traditionally avoids subtitled dramas, but Simpson thinks viewers are ready for Atlantic Crossing, she said. “Because of the lockdown, they’ve probably watched a lot of foreign-made shows,” she said.

Simpson, who was promoted to Masterpiece EP in late 2019, also had her eye on Us, about a father who tries to win back the love of his wife and reconcile with their son during a family vacation. The show stars Tom Hollander, Saskia Reeves and Tom Taylor. Simpson said she began pursuing  the show shortly after the pandemic began.

She also learned of Guilt, a darkly humorous and quirky drama in which two Scottish brothers flee a hit-and-run accident. The program stars Mark Bonnar, Ruth Bradley and Jamie Sives.

“Those were shows we needed to fill our schedule through the summer,” Simpson said. “We’re lucky that some of the shows that were delayed, like Grantchester, are going to be showing up in the fall. So we just shifted our schedule.”

Earlier in the week, PBS President Paula Kerger acknowledged that production of another drama series, Call the Midwife, had been postponed due to the pandemic.

Between production delays and viewers’ growing appetite for British drama, PBS and its producers face more competition in acquiring these popular shows, PBS CEO Paula Kerger said. “We are getting involved a little earlier up the stream in some productions,” she said.

Producers working in other genres also described how they have adapted to guidelines for preventing the spread of COVID-19 while working in studios. The team creating Donkey Hodie, a PBS Kids show from Fred Rogers Productions that premieres May 3, described efforts of producers and puppeteers to social distance and come up with the right masks.

“The good thing is that no one sees us because we’re below the frame, working the characters, so we can wear masks all the time,” David Rudman, series EP and writer, said of himself and fellow puppeteers. “We social distance as much as we can, but when we’re shooting we have to be close to each other.”

Finding masks that didn’t muffle the puppeteers’ voices and allowed them to breathe while they were active was the hard part. At one point, Rudman said, he used a “singer’s mask” while playing Bob Dog. Before long, the panting that was required for the character had Rudman gasping for air.

Eventually, the cast settled on paper surgical masks. Even then, Frankie Cordero, who plays Purple Panda, said he’s asked to bring a razor with him so that facial stubble doesn’t cause rustling audio.

In other news and developments from TCA panels:

— A second season of All Creatures Great and Small is already in production and will be presented to U.S. audiences on Masterpiece, according to Simpson. PBS’ Kerger said the show “is having an extraordinary run in that really wonderful, magical period right after the holidays.”

— Producers of My Grandparents’ War said they selected actors whose families had been involved in stories from World War II that were not widely known — including by the actors themselves. The four-part series, which spotlights the war stories of the grandparents of Mark Rylance, Helena Bonham Carter, Carey Mulligan and Kristin Scott Thomas, premieres April 4.

A condition for being selected, Rylance said, was that each actor would learn their family’s story once the cameras started rolling. Each was told in advance locations to which they would travel but not the family history.

Although the series dealt exclusively with World War II events, future editions may cover other historical periods, said Tom Anstiss, series EP. A second series is already in the works.

“We’re not wedded to the format being solely about World War II,” Antiss said. “It is a prism to explore lots of interesting chapters about social history. That could be anything from the civil rights movement to the Korean War to the Vietnam War.

“It’s a format that can be expanded, and we’re discussing that with PBS and with Channel 4 in the U.K.”