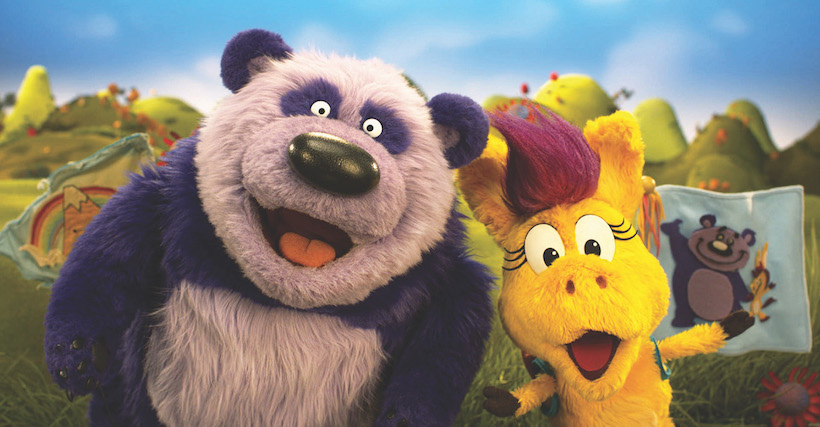 PBS Kids commissioned Donkey Hodie, a new series for 3- to 5-year-olds inspired by characters from Mister Rogers’ Neighborhood, to debut in winter 2021.

The puppet series updates Donkey Hodie, a character that appeared in 59 episodes of Mister Rogers’ Neighborhood from 1968-93. The original character will now be called “Grampy Hodie,” and the new Donkey Hodie is his granddaughter.

Fred Rogers Productions teamed up with Spiffy Pictures to create the program, which is currently in production at WTTW in Chicago. The series’ educational curriculum focuses on social and emotional lessons.

Each of the 40 half-hour episodes will include two 11-minute, character-driven stories with accompanying short-form content. The production adopts the same setting of puppet characters in Mister Rogers’ Neighborhood, “Someplace Else.”

Donkey Hodie is a yellow donkey with a magenta mohawk. Her pals include Purple Panda, Duck Duck and Bob Dog. The series will also feature new music and redos of Fred Rogers’ original songs.

“We were really inspired by the silly side of Fred Rogers, and it’s a thrill to expand the Someplace Else world he dreamed up,” said Adam Rudman, co-founder of Spiffy Pictures, in PBS’ news release announcing the show Friday.

“Life lessons like following your dreams and persevering have always been core to PBS Kids’ DNA,” said Linda Simensky, PBS Kids head of content. “With a little help from Donkey Hodie and her friends, today’s kids will learn how to come up with creative solutions to the everyday problems they encounter and keep trying until they achieve their goals.”

PBS unveiled the show during its portion of the Television Critics’ Association Winter Press Tour in Pasadena, Calif. Its executives also announced PBS Kids’ plans for the third season of Odd Squad, which debuts Feb. 17. The 20-episode season, from Fred Rogers Productions and Sinking Ship Entertainment, features a new cast of Odd Squaders and a new villain played by Toni Collette.

Odd Squad will also add new digital content. Producers plan to release a podcast, Odd Squadcast, this summer. The podcast follows the agents’ boss Ms. O,  portrayed by Millie Davis, as she is promoted to a new role, “The Big O.” In the serialized podcast, Davis’ character hosts a weekly radio show for agents around the globe. A new season of OddTube, a digital short-form spin-off of the TV show, will be released this fall.