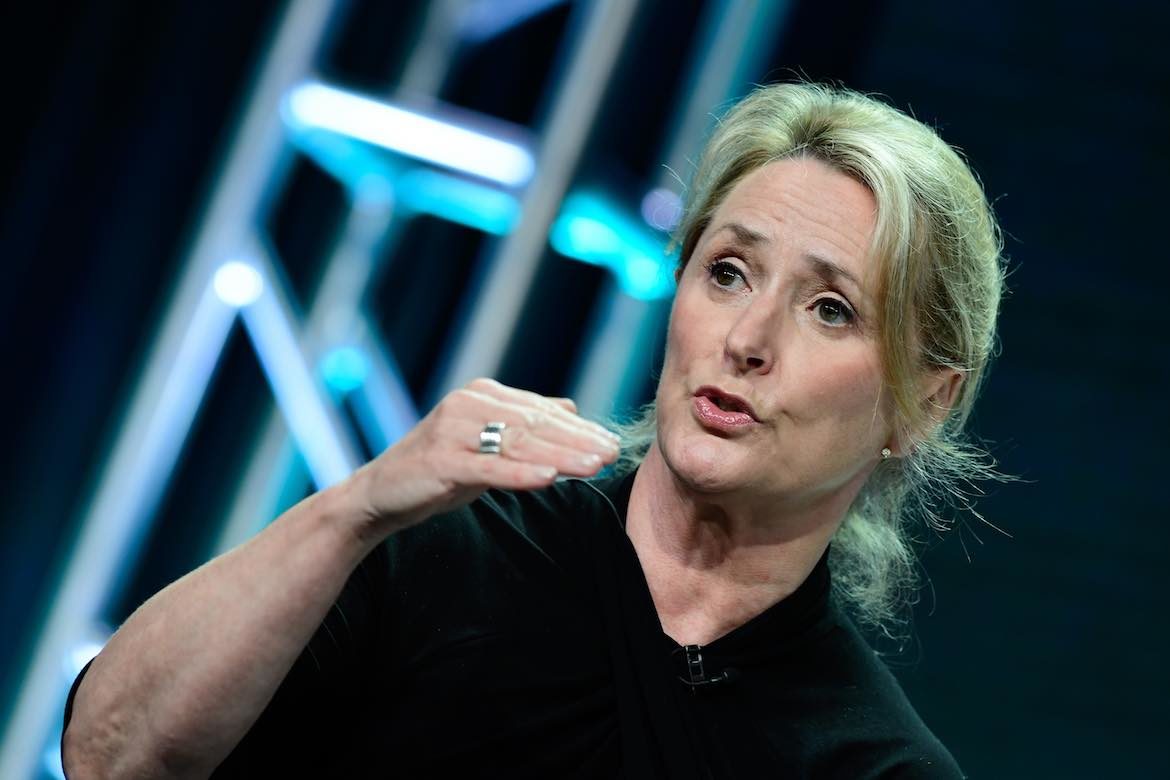 Simpson speaks during a ‘Masterpiece’ session at the Television Critics Association Press Tour in July 2018.

Susanne Simpson, the Masterpiece producer who supervised U.S. broadcasts of the hit series Downton Abbey, has been promoted to executive producer.

She succeeds Rebecca Eaton, who is moving into a new role as executive-producer-at-large. Simpson oversees programming and day-to-day operations while Eaton is focused on development of new drama projects and fundraising for the Masterpiece Trust. The job changes took effect Thursday.

Simpson, a veteran producer at WGBH in Boston, has worked closely with Eaton over the past 12 years. As deputy EP, she was involved in program selection for Masterpiece and headed up promotion, marketing and digital content. She is EP of the Masterpiece Studio podcast, which has 14 million downloads to date.

Eaton also navigated the series through the loss of longtime corporate sponsor Exxon Mobil, developing a new funding model that cultivates support of major donors. The Masterpiece Trust, which Eaton established in 2011, has raised more than $20 million to date.

“Masterpiece will continue to benefit from Rebecca’s sharp-eyed sense of story and character and her unique ability to connect with funders who support the series,” John Bredar, VP of national programming at WGBH, said in a statement. The Boston station produces Masterpiece for PBS.

In an interview, Simpson said the changes are in part a response to the increasingly competitive market for British drama.

“The real difference is that we’re going to try something we have not done much of in the past, which is to take ideas that we have for Masterpiece programs, mostly costume dramas, go to a favorite producer in the U.K. and develop it with them from the beginning,” she said. That will be Eaton’s role as EP-at-large.

“If we develop these projects, they are ours and we don’t have to compete with other streamers and broadcasters,” Simpson said.

Eaton already has three projects in various stages of development, Simpson said. She declined to share details but said one is based on a U.S. novel and two on British literary works.

Simpson handles the day-to-day work of Masterpiece, including programs already in development and production.

“In this competitive TV landscape, we are fortunate to have Susanne and Rebecca — two of the most talented executives working in drama today — taking Masterpiece into the future,” he added.

Simpson, a two-time Academy Award nominee and two-time Emmy winner, has been responsible for Masterpiece series such as Sherlock, Wolf Hall and Victoria. Under her oversight, Downton Abbey became the most watched drama in PBS history.

Earlier in her career, Simpson was supervising producer for Nova, the WGBH-produced science series, and EP for Nova’s IMAX films.

“With the wealth of great drama coming from our U.K. partners, it’s a thrilling time to be working at Masterpiece,” she said in WGBH’s announcement of her promotion.

“I relish working with my British colleagues, the people who actually make and sell these fabulous programs,” Eaton said in a statement, “and I am convinced that Masterpiece is still vital today because of the steadfast support of PBS, our funders, and, most importantly, our famously loyal viewers.”

Among many accolades collected during her tenure as EP of Masterpiece, Eaton was recognized by Queen Elizabeth II in 2003 with an honorary OBE, or Officer, Order of the British Empire — two rungs down from Knight.

CPB presented its Ralph Lowell Award, which recognizes outstanding achievements in public television, to Eaton in 2012.

Eaton’s memoir, Making Masterpiece:  25 Years Behind the Scenes at Masterpiece Theatre and Mystery! on PBS, was published in 2013.