CPB awarded two of its most prestigious honors for service to public television last month — the Ralph Lowell Award, honoring the veteran executive producer who revived one of PBS’s signature series, the British drama strand Masterpiece; and the Lifetime Achievement Award, presented to the Chicago-based attorney and former FCC chairman who played an influential role in the evolution of public television.

As the executive producer who acquired and managed co-productions of British dramas for Masterpiece and its predecessor titles for more than 26 years, Eaton has brought high-profile miniseries such as Prime Suspect, Bleak House and recent hits Sherlock and Downton Abbey to PBS. 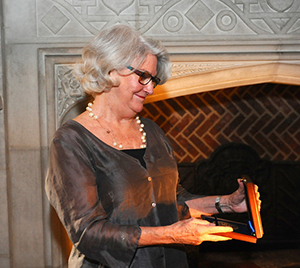 At producing station WGBH in Boston, Eaton led Masterpiece through a difficult downturn with the loss of longtime corporate sponsor Exxon Mobil in 2004, revamping the series title to bring three distinct program strands — classic, contemporary and crime dramas — under the umbrella Masterpiece; establishing the Masterpiece Trust that allows viewers to make major-gift donations supporting the series and their local PBS station; and acquiring popular series such as Downtown Abbey, the serial costume drama that tweaks the formula of Upstairs, Downstairs for contemporary sensibilities. Eaton also launched two American dramatic productions for PBS — The American Collection featuring works by writers such as Langston Hughes, Willa Cather and Henry James; and American Mystery specials based on Tony Hillerman novels. Those series launched more than a decade ago but proved financially unsustainable.

Since British drama was reintroduced as Masterpiece in 2008, audiences for the series have grown annually by double-digit percentages or better, according to CPB. Viewership increased by 15 percent in the first year; 45 percent in the second year; and 107 percent last year.

The series has also earned many honors during Eaton’s two decades at the helm: 65 Emmys, 18 Peabodys, two Golden Globes and dozens of industry awards.

Former Sen. David Pryor, a CPB director who served on the selection panel for the Lowell Award, said the judges unanimously chose Eaton as the 2012 honoree. “We are deeply appreciative of what she’s done for public television, and we look for her to do more in the future,” he said.

In accepting the award, Eaton acknowledged that CPB and played a role in her success and Masterpiece’s return to popular acclaim. “I think CPB saved Masterpiece Theatre’s life,” she said. Years after the withdrawal of Exxon’s corporate sponsorship, CPB’s television programmers recognized that the series was “fading on the vine,” she said. CPB provided a grant from a special fund designated for primetime TV programs, backing the “hard work” that went into updating and rebranding the series. “It was very hard and very risky, and we wouldn’t have done that if CPB hadn’t had our backs.”

“Rebecca Eaton has set the gold standard for programming in the television industry,” said Patricia Harrison, CPB president, during the Dec. 3 awards ceremony in Washington, D.C. “Her commitment to presenting first-rate productions featuring the finest actors, writers and directors has revitalized the Masterpiece series and attracted a wide audience to the most acclaimed content that only public television offers.”

The CPB Leadership Award, presented during the same Dec. 3 dinner, honored Newton Minow’s role in shaping the public television system. Minow’s critique of commercial television as a “vast wasteland,” delivered in a 1961 speech to the National Association of Broadcasters shortly after his appointment as FCC chairman, injected concepts of public interest and educational service into the dialogue about the emerging medium of television broadcasting. Minow also helped lay the foundation for the growth and development of public television with his support for the All-Channel Receiver Act of 1961, which mandated UHF reception capability for television receivers sold in the U.S.

Newton Minow, at right with CPB Director Bruce Ramer and Chair Patricia Cahill, spurred the development of public broadcasting in the 1960s by calling for public interest standards and educational values in the emerging medium of television. CPB presented it Lifetime Achievement Award to the former FCC chairman.

Enactment of the law spurred an increase in the number of stations, including the nonprofit educational outlets that later became known as public television. “In a few short years, public television went from being a novelty to becoming an institution of impact,” said Bruce Ramer, CPB director and Los Angeles–based attorney.

“The CPB Leadership Award recognizes leadership, vision and extraordinary service to the American public,” Ramer said. “No one is more deserving of it than Newton Minow. “You are an icon. You are a giant.”

After leaving the FCC, Minow served on the boards of PBS and its predecessor, National Educational Television, including a two-year term as chairman; he also helped Joan Ganz Cooney secure funding to start Sesame Street.

In the 2001 report Digital Gift to the Nation, co-authored with former PBS and NBC News president Lawrence Grossman, he proposed that Congress endow an $18 million trust to support development of digital content by educational institutions and nonprofit public service organizations such as public TV stations.

Minow continues to practice law at Sidley Austin LLP, a Chicago-based international law firm, where he is senior counsel.