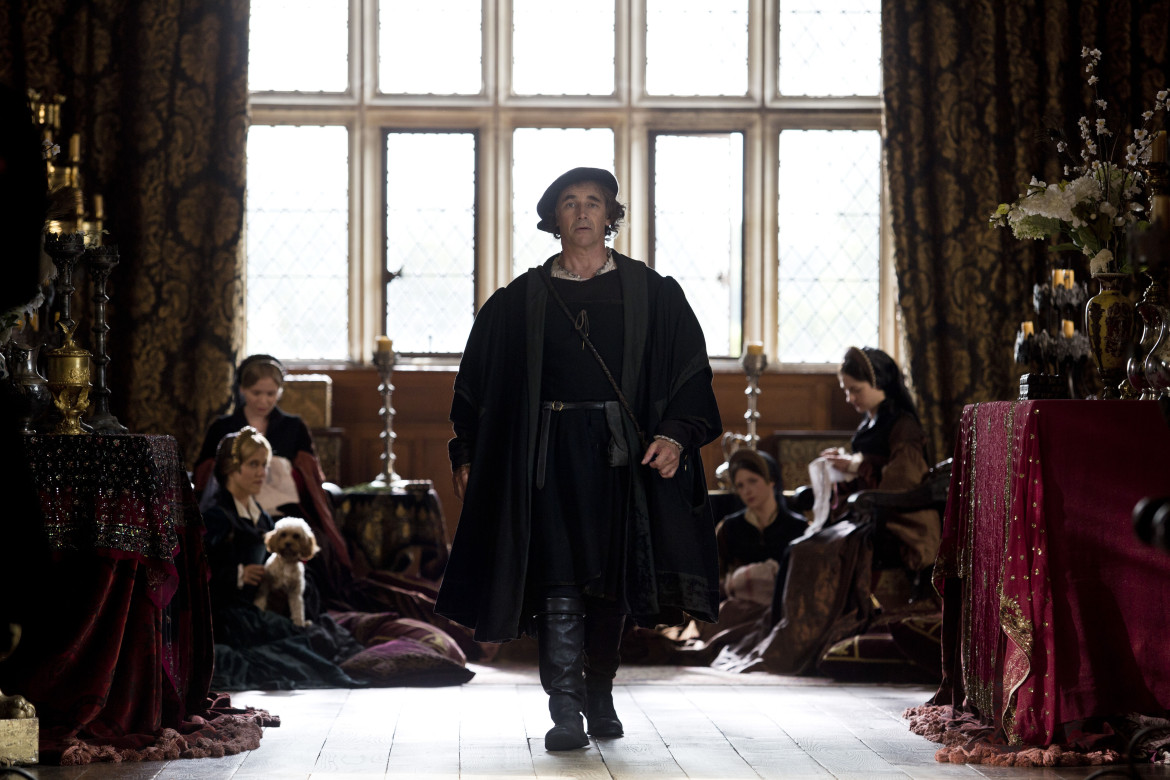 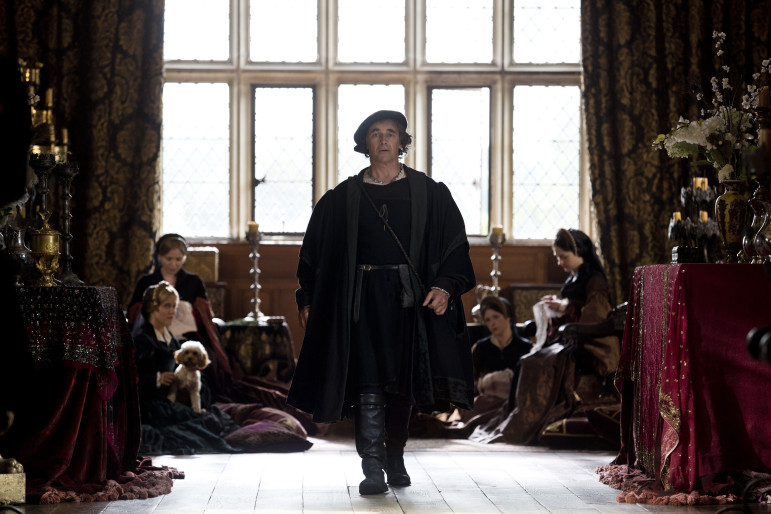 Another drama about the British upper class, set some 400 years before Downton Abbey and with much less silverware, is poised to become PBS’s next Sunday-night sensation.

Wolf Hall, a six-part Tudor-era miniseries to premiere on Masterpiece April 5, is no Downton. Heads are rolled, not pie dough. Its social upheaval and persecutions of the Protestant Reformation trump the class tensions that roiled recent scenes set in the Crawley family’s dining room. Wolf Hall is both a return to the high-end literary adaptation Masterpiece has been known for and a hot property that arrives stateside cloaked in strong ratings, rave reviews and the massive buzz of its U.K. run.

“Even with the success of made-for-TV series or returning series, it makes me happy to see that we are still doing things like this,” said Rebecca Eaton, Masterpiece’s longtime e.p.

The miniseries is based on Wolf Hall and Bring Up the Bodies, a pair of prize-winning books by British author Hilary Mantel set in the court of King Henry VIII and told through the eyes of his powerful chief advisor Sir Thomas Cromwell. After publication of the second novel, in 2012, Mantel became the first woman to win two Man Booker Prizes, Britain’s highest literary award — one for each of the novels.

She’s been working on the third novel in the trilogy, The Mirror and the Light, while preparing for the Broadway premiere of a stage version of Wolf Hall, a production of the Royal Shakespeare Company that opened a 15-week run March 20.

The small-screen adaptation, directed by Peter Kosminsky, completed its debut season in Britain last month, bringing BBC Two its highest ratings in a decade and critical acclaim for the historical authenticity of its sets and costumes, the contemporary relevance of its intrigues and its humanizing portrayal of Cromwell, a figure who has been depicted through the ages largely as a cartoon villain in a black cape.

Mantel loves the television series, which she described during a recent screening at New York’s Metropolitan Museum of Art as “not an adaptation, but a work of art in its own right.”

PBS evidently does too. The network is mounting a hefty paid advertising campaign behind Wolf Hall, something it does sparingly, for only a few shows each year, according to head of programming Beth Hoppe.

“I watched the first episode. It’s what I do to decide whether it will be big or not and if we should put a lot of money behind it,” Hoppe said. “I found it riveting.”

The marketing campaign includes three consecutive half-page ads in the New Yorker and the Atlantic, 30- and 60-second TV spots on national and local broadcast and cable networks, promotions in art-house cinemas and on Amazon’s Kindle Wake Screen, and targeted social and online video.

Wolf Hall arrives at a high point for Masterpiece, the flagship PBS drama series produced by WGBH in Boston. Buoyed by the popularity of the Downton Abbey and Sherlock, it is currently PBS’s top-rated series.

“I think [the ratings] are remarkable, considering Masterpiece is beginning its 45th season,” said Eaton, who has been importing U.K. dramas to U.S. audiences for the series for 30 years. “Downton Abbey and Sherlock have had a halo effect, and ratings for all the other Masterpiece shows are up. People come to Masterpiece and they stay. It’s exactly what we have been working towards.”

Hoppe believes Wolf Hall will draw current PBS viewers and attract some new ones, even though its premiere goes head to head with the final season of AMC’s Mad Men.

If the hype that greeted Wolf Hall’s U.K. premiere is any guide, the complex, dark Tudor drama has a good shot at meeting Hoppe’s expectations.

The frenzied reaction in Britain took everyone involved in the production by surprise.

“We thought we were making a little, esoteric, slightly highbrow drama that would probably be liked by the critics but cordially ignored by the viewing public. Nothing could have prepared us for the acres of coverage the show received,” said Kosminsky. 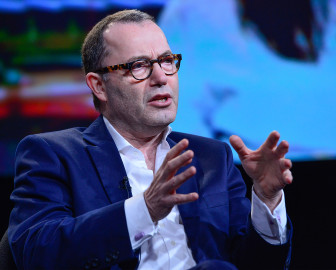 “There was Wolf Hall fever in the run-up to the show — the most extraordinary press,” said Colin Callender, the producer who nabbed coveted rights to Mantel’s books, which have sold more than three million copies. A former head of HBO Films, Callender produced the series with the BBC and Masterpiece through his company, Playground Entertainment.

The media hoopla helped make Wolf Hall BBC Two’s top-rated dramas in a decade. While the audience slipped after a gangbusters premiere, the series averaged a steady 4.4 million viewers each week for the rest of its run, according to consolidated ratings that include time-shifted viewings.

“A chunk of people drawn by the fuss and excitement decided it wasn’t for them,” said Kosminsky. “It wasn’t Downton Abbey.”

“Once those people peeled off, [we had] the natural audience of a complex show based on two Booker Prize–winning novels,” he said. The ratings were double what the BBC had expected for the miniseries.

Cromwell as ‘a hero of our time’

Mantel has achieved celebrity in literary circles with her unfinished trilogy, which starts in 1500 as young Thomas Cromwell endures a brutal beating by his father, a drunk Putney blacksmith, then runs away from home. It jumps to 1527 when Cromwell is a thriving businessman and brilliant lawyer with a checkered reputation and mysterious past from the years he spent abroad, which he seldom speaks of. He works first for Cardinal Thomas Wolsey, Henry’s Lord Chancellor, then for the king, and sets about defeating his enemies with patient, ruthless precision. He is feared for his power and mocked for his low birth.

Following Cromwell as he accrues money and power through his central role within Henry’s court, the novels have a gripping effect on readers, who feel as if they have a front-row seat in one of the most storied chapters of British history.

Mantel’s work is so significant because she’s the first author to develop Cromwell’s personal story of abuse and survival. She depicts a domestic Cromwell, at home with loving wife and daughters, a tentative father to his teenage son. He is shown as loyal, conflicted and often sympathetic to losers in the perilous game of politics, even when it was he who brought them down.

“Thomas Cromwell is a hero for our time,” Mantel said during a March 8 appearance at the 92nd Street Y in New York. “He’s climbing and climbing. He can’t stay still. You can’t balance. People are shaking the ladder from below. What do you do? Do you jump?”

“I had wanted to write about Cromwell for 30 years,” Mantel said. “Henry and his wives, their stories, have been told and retold. But Cromwell was the missing piece. . . . What I wanted to do was not rehabilitate him but explore him, to push aside preconceptions. I found the truth more complex than I had imagined.”

Callender convinced Mantel to sell him rights for the TV adaptation after meeting the author, her husband and her literary agent for tea in London. She had admired his work for HBO Films, especially his John Adams miniseries based on a book by David McCullough, and they discovered that they shared a similar sensibility. “It was an enormous responsibility,” he said, “that we would really honor those characteristics that were at the center of her book, not dumb it down, embrace the complexity of the story.” 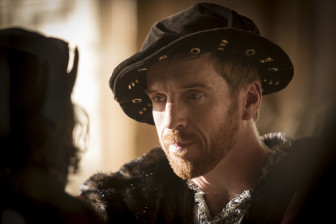 To portray well-known historical figures such as King Henry VIII, played by Damian Lewis, director Peter Kosminsky tried “to give the feeling that the characters don’t know their own history. They are living in the present tense.” (Photo: Ed Miller, Playground & Co. Pictures)

Like Mantel’s novels, the miniseries was shaped by dual objectives — historical authenticity and portrayal of its central characters as living contemporary people. “The idea was to give the feeling that the characters don’t know their own history,” Kosminsky said. “They are living in the present tense. They have no idea that someone is going to be sitting in a classroom reading about their fate.”

Kosminsky is known for documentaries and contemporary docudramas tackling difficult subjects (Innocents, Warriors, No Child of Mine). His 2005 television movie The Government Inspector with Mark Rylance told the story of Dr. David Kelly, a biological weapons inspector in Iraq. His two-part film Britz explored the lives of second-generation Muslims in Britain.

In approaching Wolf Hall, he wanted to be “a little more faithful to the period and less theatrical. Other Tudor costume dramas have tended to be hyped, with a lot of nudity and romping in and out of beds.”

When possible, scenes were filmed at sites where the characters themselves once trod. The costumes are exact historical replicas of Tudor clothing — no zippers or Velcro. An occasional pocketknife is the only dining utensil in evidence. Illumination comes only from the sun, firelight and candles.

“I wanted to get the sense that rooms were very different between day and night in that era. The question was how to achieve it,” said Kosminksy. His team tested five cameras in combination with five sets of lenses. They settled on the ARRI Alexa camera and a new Leica lens that had just become available and broke new ground in British television.

The unusual painterly effect he created, with faces often half in light, half in shadow, led some U.K. viewers to complain that that the show was too dark.

“The moody look was an artistic choice,” Kosminsky said.

The series’ producers have compared Wolf Hall to a modern-day political thriller, akin to House of Cards, the Netflix series with Kevin Spacey as ambitious, plotting Francis Underwood.

Though there’s no lingering mystery of what happens to Cromwell — he was executed on the chopping block in 1540 — Mantel’s novel on the last years of his life is still a work-in-progress.

“People think I’m weaselly because I won’t say where I’m up to,” she said of her progress on The Mirror and the Light. “I don’t write sequentially. I write in scenes and put it together like a collage. It’s only in the last few months of writing that it begins to fall into place.”

“It’s hard not to feel pushed,” she added, “to feel that people are waiting for it. But I can’t feel pushed. It’s a 10-year project. It’s the central project of my life and I’ve got to get it right.”

As for producing the finale to the television miniseries, Callender said “the whole team would love to do it” when the novel is ready.